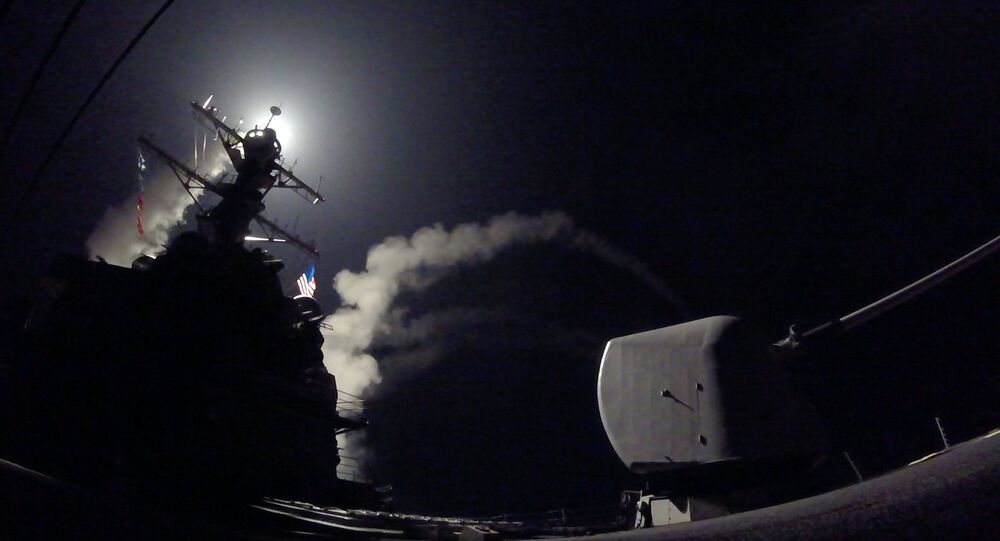 The US missile strike against Syria gave a free rein to Daesh, Washington is fighting Damascus instead of terrorism, Russian Prime Minister Dmitry Medvedev said on Wednesday.

He noted that the attack was not authorized by the United Nations and was in violation of international law thus being "an act of military aggression".

"We do not know what may happen next. But I know for sure who benefited from this act of aggression — Daesh, because [the attack] gave them [terrorists] a free rein," Medvedev said.

"And what we see is that the new US administration's first step in the Syrian issue was a strike against government troops. This means that this is not a fight against terrorists but a fight against the Syrian leadership. Whether Americans like it or not, but that is a legal political power," he elaborated.

The prime minister said that further escalation of the Syrian conflict may lead to the destruction of the state and partial victory of terrorists.

"It is obvious that further escalation will lead to the destruction of the Syrian state, its disintegration and a partial victory of terrorists. Such a scenario contradicts our plans and Russia will work in this direction," Medvedev said.

He described the chemical incident in Syria's Idlib province as "a well-planned provocation" from which Washington might have benefited.

"Everything that has happened recently in Syria, including the military attack by the United States, absolutely does not benefit the settlement of the situation. What happened in Idlib is a large and well-planned provocation from which, probably, the US administration benefited." Medvedev called for an investigation and warned against sticking labels [on Bashar Assad's government].

© CC0
Idlib Chemical 'Attack': Experts' Questions Multiply Western Narrative by Zero - Russian MoD
The Syrian foreign minister denied the government’s involvement in the Idlib incident, saying it had never nor would it ever use chemical weapons on either civilians or terrorists operating in the country.

© Sputnik / Mikhail Voskresenskiy
'Fear and Ruins': First-Hand Account of the Aftermath of US Strike on Syrian Airbase
The US missile attack claimed the lives of 10 people, an officer of the Syrian Armed Forces told Sputnik. The Russian Defense Ministry said that the attack left two Syrian servicemen missing, four killed, and six suffering severe injuries from the fire. Homs Governor Talal Barazi said on April 7 that at least two civilians from a nearby village and five Syrian servicemen were killed.