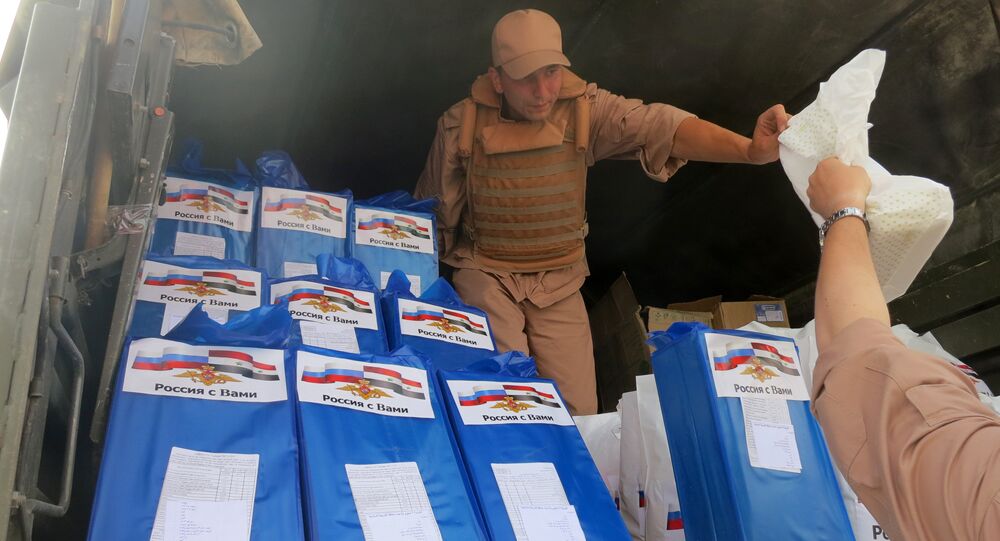 Russia Delivers About 10,000 Tonnes of Aid to Eastern Syrian Port of Tartus

According to reports, Russia has delivered about 10,000 tonnes of humanitarian aid, which primarily consists of food, to the eastern Syrian port of Tartus.

© Sputnik / Ali Abrahim
Russia Delivers About 5 Tonnes of Aid to Syrian Civilians in 24 Hours
TARTUS (Sputnik) – Russia has delivered about 10,000 tonnes of humanitarian aid, which primarily consists of food, to the eastern Syrian port of Tartus, a Sputnik correspondent reported.

"This is the biggest humanitarian aid supply batch delivered to Syria by sea. It mainly consist of foodstuffs — flour, sugar, canned goods. At the same time, the canned goods deliveries take into account the traditions of the population, so it is beef and fish," Alexander Yakovlev, the military commandant of the port, said.

The humanitarian aid was delivered by two big transport vessels, Sparta-1 and Sparta-2, in containers which were in accordance with international standards. The design of the containers made it easier to unload the cargo and keep it safe. Russian servicemen in Syria were involved in the unloading process.

Tartus Mayor Haidar Murhej told reporters that Syria highly appreciated Russia's humanitarian efforts and gave his assurances that the aid would be quickly delivered to those areas where the population is the most in need.

Syrian residents are in dire need of assistance amid the ongoing conflict between Syrian government forces and various opposition and terrorist groups, such as the Daesh, which is outlawed in Russia and many other countries.

Since the beginning of the military crisis in Syria in 2011, Russia has been supporting Damascus in the fight against terrorist groups and providing Syrian civilians affected by the conflict with medical help and regular humanitarian aid deliveries to help them survive until peace is restored.

Russia Brings Aid to Over 3,300 Syrians in Three Provinces in 24 Hours