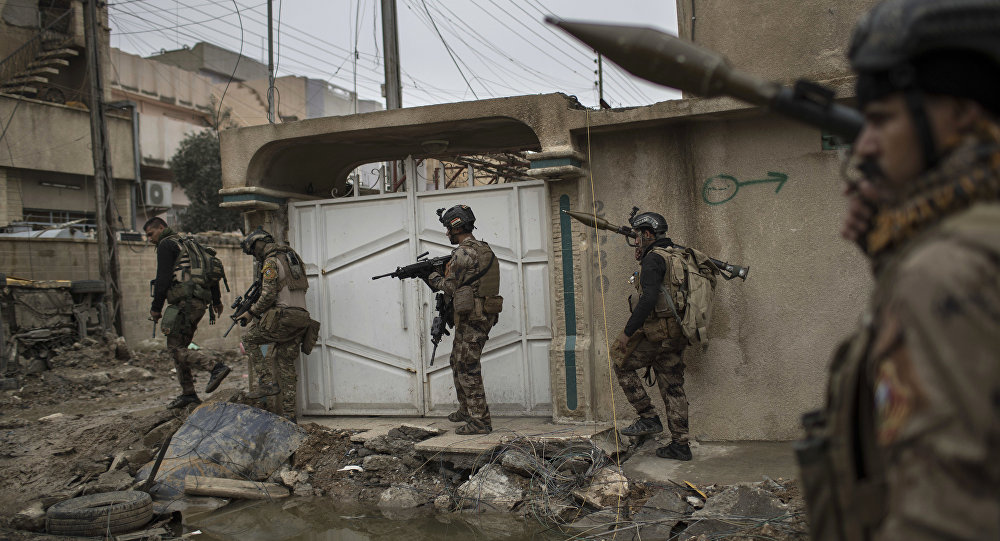 A new pontoon bridge has been constructed south of Mosul over the Tigris River, providing families with an escape route from the area after other crossing points were blocked by flooding. It comes amid continued conflict between Daesh and the Iraqi government as government forces, with the support of the US, fight to oust Daesh from its stronghold.

Heavy rains compelled the army to dismantle makeshift bridges connecting two areas of Mosul, which forced residents to use small boats if they wanted to leave the city.

During the six-month effort to retake Mosul from Daesh, whose leader declared the area a "caliphate" after taking control in 2014, most of the city’s bridges have been destroyed. On Tuesday, families trying to cross the new bridge in trucks, taxis and buses formed long lines on their way out of the area.

Southwest of Mosul is the Hammam al-Alil camp, one of the main destinations for residents fleeing to escape conflict.

The flooding also caused shipments of aid coming from Erbil to stop, but it has now been resumed because of the new bridges.

One spokeswoman for the United Nations High Commissioner for Refugees (UNHCR) said, "Everything is back to normal."

In the past four days roughly 20,000 people have been able to leave Mosul, according to a UNHCR report. A lack of transportation affected the number of people able to vacate the area. About 400,000 people were still in Mosul as Daesh was clashing with government forces to maintain their stronghold in the Old City.

Speaking of the government force’s 9th division, Lt. Col. Hussein Lazim Zghayer said, “(Daesh) carry out attacks on our defensive lines, but each time we repel them and they run away, leaving bodies of their dead fighters behind … Minutes ago, they launched an attack and we responded by shelling them with mortar rounds, killing two of them and their bodies were left in front of our defensive lines."

Most of Mosul has been retaken by the combined forces of counter terrorism units, police and the military, as the jihadists now use mortar fire, booby traps and snipers to try to fend off the troops that surround them.

The UN has warned that western Mosul is on the brink of a humanitarian crisis, with Deputy Special Representative of the UN’s Assistance Mission for Iraq (UNAMI) Lisa Grande saying, "If there is a siege and hundreds of thousands of people don’t have water and don’t have food, they will be at enormous risk … We could be facing a humanitarian catastrophe, perhaps the worst in the entire conflict."

In a March report, Amnesty International criticized the Iraqi government for advising Mosul residents to stay in their homes, instead of providing humanitarian corridors, writing, "Hundreds of civilians have been killed by airstrikes inside their homes or in places where they sought refuge after following Iraqi government advice not to leave during the offensive to recapture the city of Mosul from the armed group calling itself Islamic State (IS)."