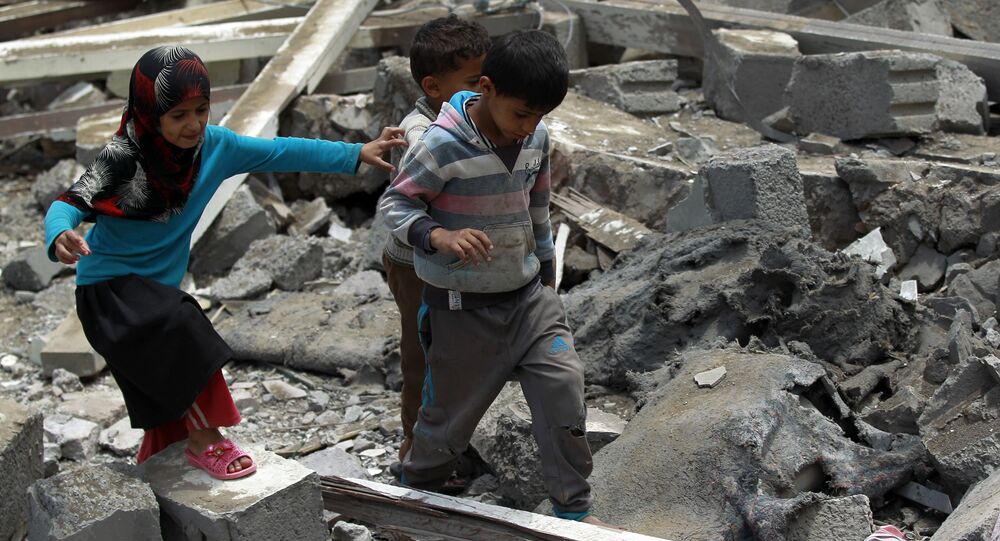 There will be enough food for the population in Yemen only in the coming four months if the solution to the worsening military conflict in the country is not found, Magne Barth, the head of the Delegation of the International Committee of the Red Cross (ICRC) in Moscow, said Monday.

© REUTERS / Khaled Abdullah
Starving Children in Yemen Risk Ending Up as Terrorists
MOSCOW (Sputnik) — According to Barth, the purchasing power of the population is falling, the prices of the main goods have significantly increased and the population is running out of food. It will be enough only for four months, if the quick solution for the problem is not found, Barth said at a press conference in Moscow.

Talking about the activities of the ICRC in Yemen Barth reminded that the organization's employees had been repeatedly assaulted in the country. He called on the sides to the conflict to respect the neutrality of humanitarian organizations and ensure humanitarian workers have access to the country's ports.

Yemen has been suffering from a brutal conflict between the government and the Houthi movement backed by army units loyal to former President Ali Abdullah Saleh since 2014. In March 2015, the Saudi-led coalition of mostly Persian Gulf countries started carrying out airstrikes against the Houthis at the request of governmental forces.

© Wikipedia / Jialiang Gao
Untold Story of Saudi-Led Coalition's War on Yemeni Historical Heritage
Apart from this, the peace talks between the parties failed in August after the Houthis refused to support a road map proposed by UN Special Envoy for Yemen Ismail Ahmed that involves the rebels laying down arms and the formation of a unity government.

According to last week's bulletin of the UN Office for the Coordination of Humanitarian Affairs, almost 19 million people are acutely affected and need some form of immediate humanitarian assistance as a result of the violent conflict in Yemen. Apart from that, over $2.1 billion is needed to provide life-saving assistance to 12 million Yemenis in 2017 as the 2017 Yemen Response Plan was only 14.4 percent funded.