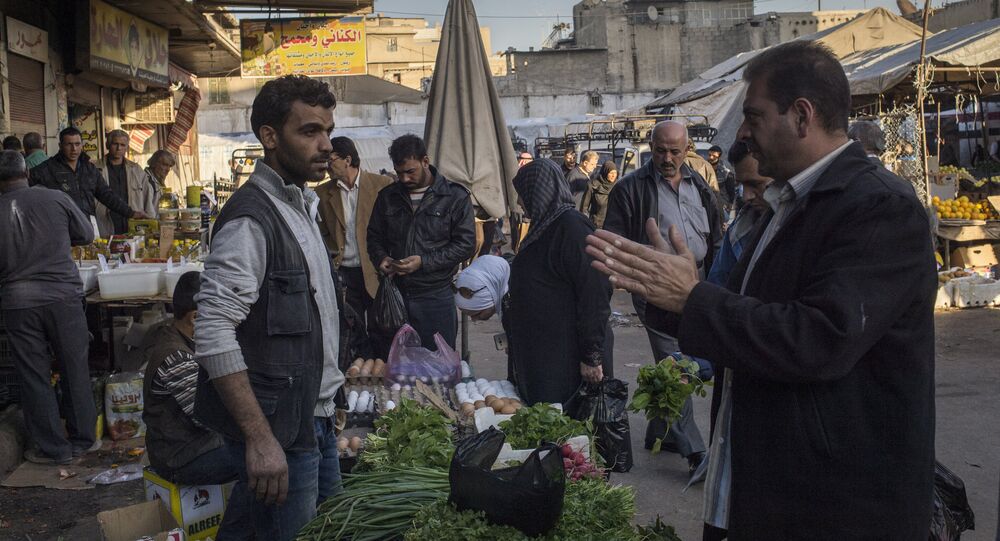 Plowshares Into Swords: Aleppo Farmers Defend Themselves From Daesh in Syria

Farmers in Syria's Aleppo province have formed self-defense units in order to protect their own villages from terrorists, according to RIA Novosti.

© Photo : Help to children of Syria/vk.com
'They Don't Know the Word Mom': Russian Soldiers Give Hope to Aleppo War Orphans
With most of the Aleppo province cleared from jihadists, local farmers are taking up arms in order to prevent terrorists from retaking the area, RIA Novosti reported.

In particular, one village is creating self-defense forces in the area known as breadbasket of Aleppo. The region provided the entire province of almost five million people with vegetables and meat before the civil war was unleashed in Syria in 2011.

"The militants killed all those who wanted to work on their own land, and those who refused to take the militants' side. I had to flee the village after they killed 23 people in my family," one local man, Ahmad al-Ali, was quoted by RIA Novosti as saying.

© AFP 2020 / George OURFALIAN
A member of the Syrian government forces walks in Deir Hafer on the eastern outskirts of Aleppo on March 30, 2017, after they took control of the town from Daesh terrorists

After the jihadists were driven out of the village, locals began to form self-defense forces to protect it from a possible return of the terrorists, who are currently based about 15 kilometers from the area.

"We need to gather the harvest before sunset because today it's our turn to stand on duty. Of course, it's hard, but if the militants return, we will face even harder times," al-Ali said.

Almost half of the village' current population of 3,000 reportedly signed up for the militia. Before the war, the village's population stood at 10,000 people.

Over the past 24 Hours #Russia delivered 3.6 Tons of #Humanitarian aid to 3,300+ #Syrian #Civilians in #Aleppo & #Latakia.#Syria. pic.twitter.com/oWcpDEh4eq

Remarkably, training classes on how to equip a firing point in an abandoned house are conducted by servicemen from a battalion of the Russian military police in Aleppo.

Additionally, they train Aleppo militia units to assemble and disassemble submachine guns as well all the ABCs of battlefield medicine, including how to dress a wound.

The so-called Arab Spring protests in Syria that took place in 2011 resulted in clashes between government forces and opposition groups, which became increasingly radicalized as foreign fighters and money from extremists in Qatar and Saudi Arabia flooded into the country.

YouTube/Sputnik
#Believe_in_Aleppo: Syrians Erect Inspirational Monument to Resilience
On December 16, 20016, the Russian Defense Ministry's Center for Syrian Reconciliation said that the Syrian army operation to liberate the eastern neighborhoods of the city of Aleppo was over, and that the Syrian government troops were eliminating separate hotbeds of militant resistance.

However, the battle for surrounding Aleppo Province rages on, with government troops, the Kurdish-led Syrian Democratic Forces, the Turkish-backed Free Syrian Army forces, the terrorist group Daesh, and other Islamic terrorist groups such as Ahrar al-Sham and the Al Nusra Front all vying for control of the region, which accounted for almost 23% of the total population of Syria before the war.