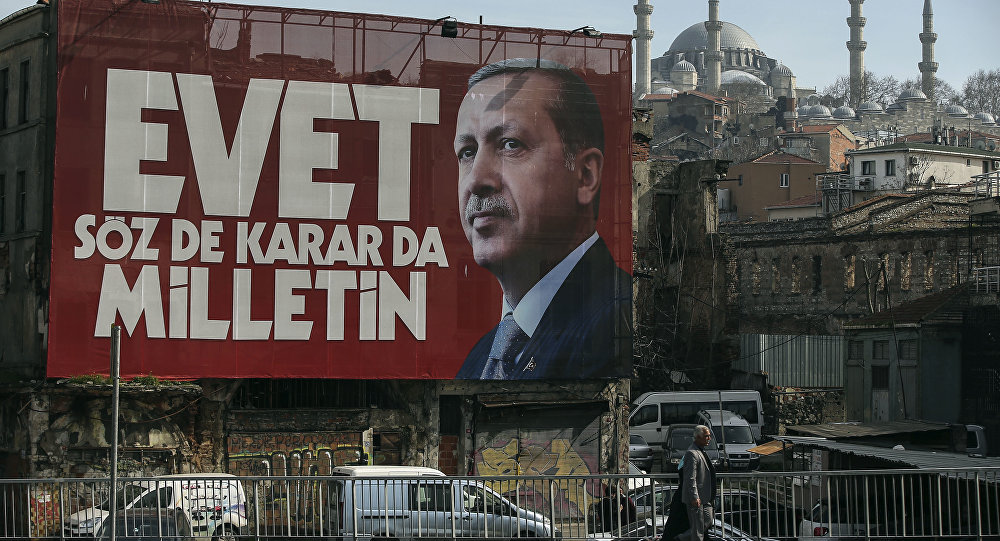 Turkey will hold a referendum on 18 constitutional amendments, envisaging expansion of the presidential powers, on Sunday.

© REUTERS / Ruben Sprich
Referendum in Turkey May Legitimize 'De Facto One-Man Rule'
MOSCOW (Sputnik) — The proposed changes stipulate strengthening of the presidential powers over the legislature and the judiciary, as well as allow the president to remain the head of the political party he represents, which is not allowed by the current legislation, grant him the ability to appoint a number of top judges and declare a state of emergency.

The amendments were approved by the Turkish parliament on January 21, despite the criticism from the opposition parties, which consider the move as a power grab attempt by President Recep Tayyip Erdogan.

In particular, Turkish opposition Republican People's Party (CHP) leader Kemal Kilicdaroglu warned in early April that in case the voters supported the proposals, an uncontrolled power could result in a "disaster."

© REUTERS / Alkis Konstantinidis
Turkish Referendum: 'No' Flags Raised Over German Opera House Day Ahead of Vote
Earlier this week, the Organization for Security and Cooperation in Europe (OSCE) observation mission, assessing the campaign environment of Turkey's upcoming referendum on the constitutional reform, issued a report calling the campaign highly politicized.

According to the OSCE, during March 17-April 7 campaign "No" supporters were facing police interventions and even arrests in several cases, while Turkey's senior officials, including the president and the prime minister, equated "No" campaigners with the July 2016 failed coup plotters or terrorist organizations.

The Turkish citizens living in other countries have already cast their ballots in embassies and consulates.

Erdogan: Western States Striving for ‘No’ in Turkish Constitutional Referendum

Erdogan: 'Europe Will Answer for Their Treatment of Turks Following Referendum'