More than 12,000 people have signed an online petition calling for the UK government to formally apologize to the Palestinian people for the Balfour Declaration, a 1917 letter that is perceived as the starting point of the history of modern Israel. 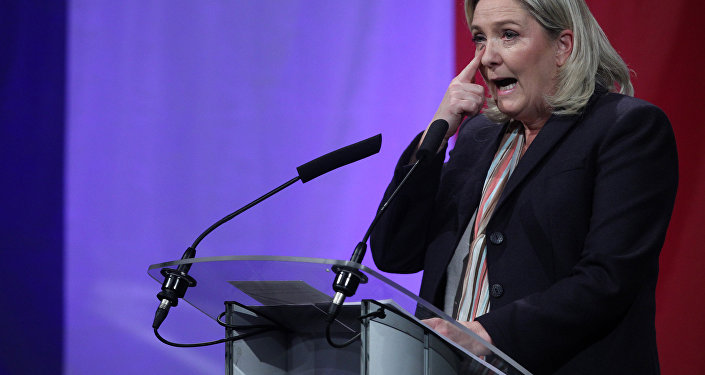 © AP Photo / Michel Spingler
Israel Slams Le Pen's Remarks Denying French Role in Holocaust
More than 12,000 people have signed the petition demanding British authorities apologize to Palestinians for the so-called Balfour Declaration, a letter sent by then-UK Foreign Secretary Arthur James Balfour to Walter Rothschild, the second Baron Rothschild and a leader of the British Jewish community, back in 1917. In the letter, the British government formally endorsed the idea of creating a Jewish state on Palestinian territory.

The Balfour Apology Campaign (BAC), the organization behind the petition, says that it is this letter that is responsible for the fact that Palestinians do not have an independent Palestinian state today.

"An apology would be recognition of the mistake that Britain made in the Balfour Declaration. There are many precedents in which UK Prime Ministers recognized Britain's role in causing suffering in its former colonies," it reads.

According to UK online petition rules, a petition that gathers 10,000 signatures must receive a formal response from the British government, UK media report. However, the authors of the petition claim they have not received such a response despite passing the signature threshold five days ago.

The petition must gather 100,000 signatures to be considered for debate in the British Parliament, and that is the number that BAC aims for.

The 1917 Balfour letter contained a formal statement that read:

"His Majesty's government view with favour the establishment in Palestine of a national home for the Jewish people, and will use their best endeavours to facilitate the achievement of this object… "

Because of this, the authors of the online petition and many others see this document as the cornerstone of the Jewish state that came into being after World War II and, consequently, blame the UK for the suffering of the Palestinian people.

Curiously, the formal declaration of the British government continued with the following:

"… [I]t being clearly understood that nothing shall be done which may prejudice the civil and religious rights of existing non-Jewish communities in Palestine, or the rights and political status enjoyed by Jews in any other country."

© AFP 2019 / Jaafar Ashtiyeh
Palestine Wants China's Greater Involvement in Israeli-Palestinian Talks - FM
This means that, plain and simple, the Jewish state should not be created at the expense of the Palestinians. Considering the current conflict, which has flared and smoldered for half a century already, this is where the Balfour declaration failed to live up to its statement.

"We have said clearly that we have been victims of British colonialism and that the least we would expect from the UK is to apologize to the Palestinian people," says Xavier Abu Eid, a spokesman for the Palestine Liberation Organization, according to the Media Line. "A foreign colonial power decided to give Palestine to an organization that was not even in Palestine. This is one of the darkest episodes of the past 100 years."

Unsurprisingly, Israel officially praises the Balfour Declaration and considers the petition a sign of Palestinian reluctance to solve the conflict in the present.

According to the Jerusalem Post, PLO spokesman Abu Eid disagreed.

"We don't say there is no two-state solution. We recognized Israel within the 1967 borders and that recognition is still in force," he said. "But it would make a difference if they acknowledged what they did to us."

Moshe Zimmerman, a professor of history at the Hebrew University of Jerusalem, has provided arguably the most weighted opinion.

"They have nothing to apologize for. The Balfour Declaration promised self-rule to the Jews without taking anything away from the Arabs," he told reporters.

"Colonial powers thought they could allocate territory to anyone they wanted. If they [the British] have to apologize for anything it is for being a colonial power," he added.

'Break the Ice' in Israel: Gov't Delays Election So Britney Can 'Oops Again'