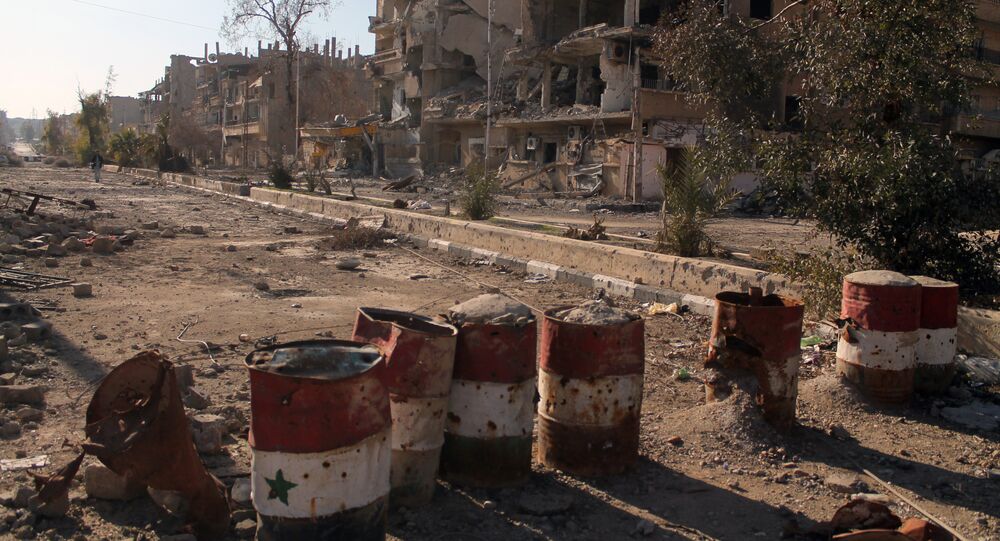 The Syrian General Staff said Thursday that the US-led coalition had struck a warehouse presumably storing toxic agents, which belonged to Daesh terror group (outlawed in Russia), as a result killing and poisoning hundreds of people, including civilians, the claims which Washington has denied.

The United Nations and the Organization for the Prevention of Chemical Weapons (OPCW) started the investigation of the incident, however the United States, without waiting for the results of the investigation, launched cruise missiles at the Syrian military airfield in Idlib province on April 6, saying that the strike was a response to the alleged chemical weapons use.

“First a white cloud and then a yellow one appeared at the site of the strike, which points at the presence of a large number of poisonous substances. A fire at the site continued until 22:30 [19:30 GMT]," the statement read.

The results of the US’ attack prove that Daesh terrorist group had chemical weapons, which could be used in mass attacks, the Syria army added.

The Russian Defense Ministry does not have information confirming casualties as a result of the alleged US-led coalition airstrikes, according to the ministry's spokesman Maj. Gen. Igor Konashenkov.

"The Russian Defense Ministry does not have information confirming reports of people's deaths and the nature of the destruction caused by the international coalition airstrikes in the Deir ez-Zor area."

© AFP 2021 / AHMAD ABOUD
Independent Commission to Probe Reports of Coalition Attack on Deir ez-Zor - UN
Konashenkov added that the Russian contingent deployed in Syria had sent reconnaissance drones to monitor the situation in the area hit by coalition airstrikes.

The Independent International Commission of Inquiry on the Syrian Arab Republic (CoI) has started studying the reports of the US-led coalition attack and will investigate it, the UN Human Rights Council told Sputnik.

"The CoI is looking into reports about this particular incident … The CoI's mandate is to investigate violations of human rights and international humanitarian law occurring in the Syrian armed conflict, regardless of the perpetrator. Moreover, the CoI investigates all situations where attacks by any party to the conflict have led to the death and injuries of civilians," spokesman Rolando Gomez said when asked whether this incident would be investigated.

US MAY FIND ITSELF IN COMROMISING POSITION

© AP Photo / Bilal Hussein
US Coalition Denies Reports Airstrike Hit Chemical Weapons Near Deir ez-Zor
If the claims of the Syrian government about the US-coalition attack on the Daesh base will be supported by a relevant evidence it would prove Russia’s repeated claims that the terrorists in Syria have weapons of mass destruction, Viktor Ozerov, the head of the Committee on Defense and Security of the Russian upper house of Parliament said.

Thus, Washington could find itself in compromising position as “it would have to explain why the chemical weapons, in the use of which it has accused Damascus, turned out to be owned by the terrorists,” Ozerov said.

The data of the Syrian army “calls under question and maybe even refutes” the US claims that the Syrian government is behind the use of chemical weapons in Idlib, Ozerov's deputy said.

ACCIDENTAL US-COALITION ATTACK ON ITS OWN SOLDIERS

At the same time, US Central Command admitted that a US-led coalition counterterrorism strike near Syria’s Al Tabqah accidentally killed 18 members of the Syrian Democratic Forces on April 11 fighting terrorists in the area, according to a press release issued on Thursday.

The coalition is probing the causes behind the incident, according to the release.

Too Early to Set Up Body on New Syrian Constitution - Moscow