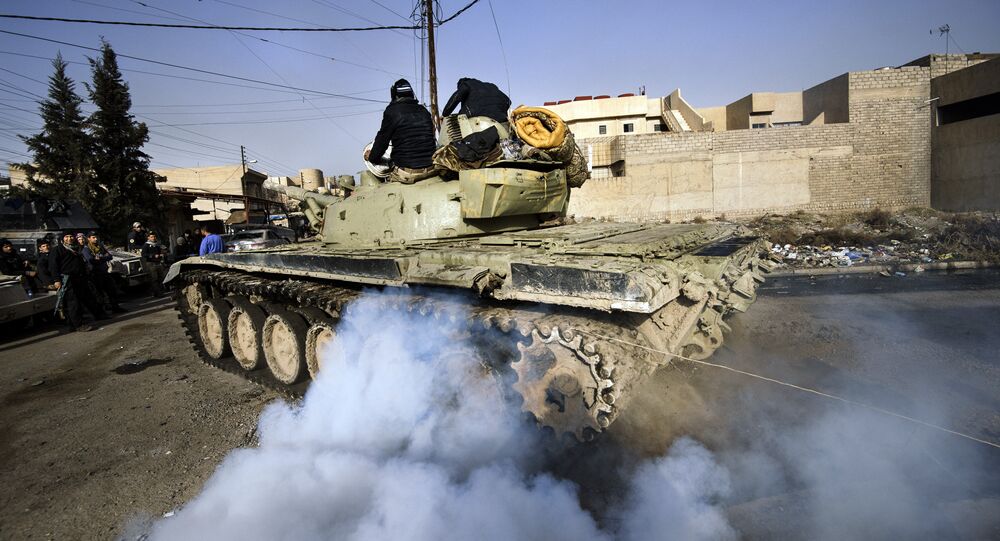 Teaming Up: Syria Calls for More Anti-Terror Cooperation With Iraq

In the light of Syria's call for more military co-operation with neighboring Iraq in the fight against terrorism, Iraqi and Syrian military experts told Sputnik that greater co-operation would benefit both countries and enable them to better control their joint border.

Iraqi military expert Amir al Saidi told Sputnik that there is an urgent need for the two countries to increase their military co-operation, but the task is complicated by the presence of so many foreign players.

"The relationship between the armies of Syria and Iraq is affected by a lot of players, not only the US but Turkey and Iran, even Saudi Arabia and Jordan."

"How is it that America can carry out an operation to liberate prisoners in Rakka, but Iraq can't? Hundreds of people are being held captive by Daesh in Syria. Neither Syria nor Iraq can cope with terrorism on their own."

"International and regional countries have not truly unite their efforts. You can only defeat terrorism by combining the strength of the Iraqi and Syrian armies. In this regard, the establishment of full control over the border between countries can make a significant contribution. If contact can be established between the two countries' intelligence services to prevent terrorists crossing the border, then we can talk about protection," al Saidi said.

Iraq, Iran, Russia and Syria set up an information exchange center in Bahgdad in autumn 2015. Intelligence from the center has been used to carry out airstrikes against Daesh targets.

© AP Photo / Peter Dejong
Syria Invited OPCW to Send Inspector to Airfield - Representative to UN
Syrian expert in military strategy al Amid Ali Maksud told Sputnik that Mikdad's appeal for more co-operation is a reaction to Thursday's airstrike by the US against the Syrian army's Shayrat air base.

"The statement by the deputy foreign minister is a reaction to US aggression against Syria. At present, the Syrian army has regained control over the city of Palmyra and the mountain range from al Mazar to the area of al Sakhnah, and is launching an offensive towards the al-Tanaf crossing on the Iraqi border. The call for cooperation is dictated by the current situation on the battlefield," Maksud explained.

"Russia, Iran, Syria and Iraq decided to oppose the US, which has a plan to redraw the map (of the Middle East) and drive Russia out of the region. Syria intends to completely free its land from terrorists. The possibility for cooperation between the Syrian and Iraqi armies has increased significantly."

"Iraqi air strikes against Daesh positions in the Syrian city of al-Bukamal, which caused the terrorists to flee, can be seen as the beginning of future joint work. About a week ago, Syrian airplanes attacked Daesh in Iraq. All these strikes were coordinated via the joint operations center," Ali Maksud said.

On Tuesday, the Syrian army managed to liberate the strategic height of al-Abtar, south of the ancient city of Palmyra from the Daesh terrorist group. Syrian government forces also  carried out operations against the Jabhat Fatah al Sham terror group in Daraa province.

US, Allies Leading Terrorism in Syria - Syrian Representative to UN