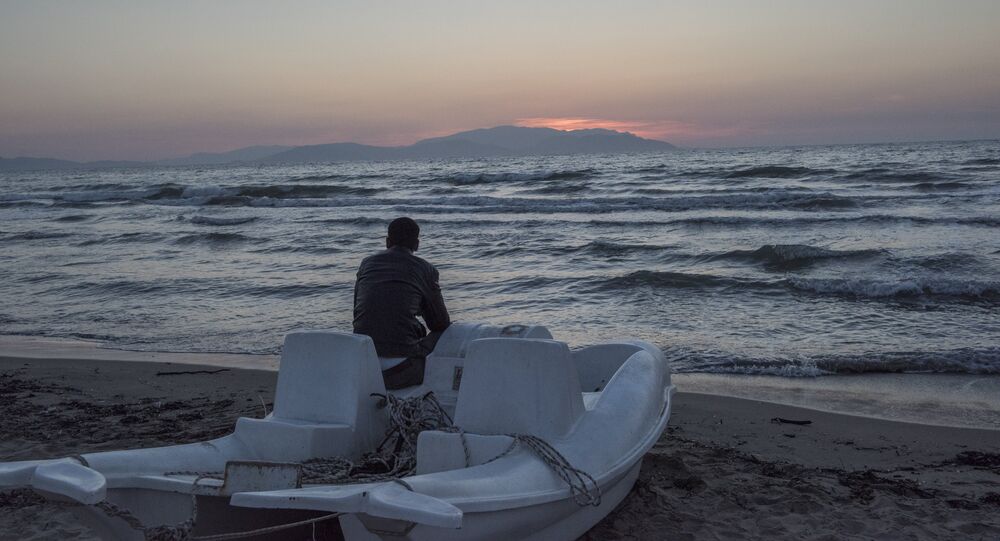 Sputnik Turkiye continues its report on the real lives of Syrian refugees living in Turkey. It has talked to a number of non-governmental organizations dealing with the migrants, which said that Europe hasn't stuck to its obligations on the refugee issue. Its only objective is to keep the refugee flow as far from its borders as possible.

© Sputnik / Valeriy Melnikov
Syrian Refugees: 'Europe Does Not Want Us out of Its Fear of Islam'
The representatives of the non-governmental organizations dealing with migrants told Sputnik that refugees have become a political bargaining tool for Europe. Until there is an effective solution to the migrant issue, people will continue to resort to entering the borders of European countries illegally.

"With the introduction of the so-called "temporary protection" regime for the refugees from Syria, the asylum seekers face more difficulties when applying for international protection," Eda Bekçi, head of the Association of Solidarity With Refugees told Sputnik.

Hence, she added, it has become even more difficult for them to get into third countries from Turkey. Syria is still at war; however from the legal point, refugees get trapped in Turkey because this "temporary protection" regime has cut off all the ways of getting the asylum. These people, she said, can't get back to their home country because of war.

There is no security for the rights of the refugees on the territory of Turkey. Additionally, due to certain geographical restrictions, migrants who arrive in Turkey rather than the European countries can't get official refugee status.

Bekçi noted that Western countries often criticize Turkey despite not sticking to their obligations.

"Turkey is often criticized by the west, but, unfortunately, the European countries often invent their own inhumane ways of restricting the refugee flow into their territories. They've built walls with high-voltage barbed wire. Moreover, they try to find ways of limiting the refugee influx using the law. The agreement on the re-admission of refugees between Turkey and the EU is essentially that," she told Sputnik.

"Unfortunately, we see how Europe's high human rights standards have been put on the back burner when dealing with a large-scale refugee influx," she stated.

The human rights activist pointed out that the refugee issue has been constantly used as a political bargaining tool.

"Syrian refugees are the most likely to suffer in the negotiations for visa-free travel for Turks into Europe. It does not correspond to the notion of 'human dignity.' People should have the legal right to asylum. The Geneva Convention says that anyone who faces ill treatment or torture in his or her own country has the right to asylum in more secure countries," she said.

© AP Photo / Andre Penner
A Place in the Sun: Syrian Refugees Get Warm Welcome in Brazil
Eda Bekçi added that more than 60 countries have signed the Geneva Convention and they should stick to their obligation, Turkey is not the only solution to this issue. There is such a notion as "burden sharing," she claimed, insisting that this "burden" should be shared evenly.

Yıldırım Şahin, the deputy head of "Bridge Between People" in the Turkish city of Izmir, told Sputnik that there is a humanitarian drama unfolding in Turkey.  Greece, he said, also faces a deadlock.  There are about 30,000 people which the EU does not want to accept.

"It is a hypocritical policy. It is only too clear who has initiated the war in Syria. However, the West is taking every measure to ensure that isn't consumed by the fire it started.  The European countries do not care about these people and the conditions they live in in Turkey. The only thing they care is that they don't move to the West," he said.

The human rights activist noted that Turkey has accommodated about three million Syrians, but that Turkish employers only view them as a cheap labor force.

"It is very difficult for any country to accommodate three million refugees. Turkey has done it, but there is another side to it. First, these people are viewed only as a cheap labor force. Turkey's textile industry is now cheaper than Chinese due to the refugees who've come from Syria.

These people not only get the cheapest rate per hour and work longer hours than Turkish nationals, but they work unofficially and have no insurance.  Employers have been able to profit from the influx of Syrian refugees, which has become a sort of a life saver for the Turkish economy amid the economic crisis," he told Sputnik.

He also commented on Turkey's threats to open its borders for migrants, saying that the West simply closed its eyes to everything that is going on in Turkey in exchange for closed borders.