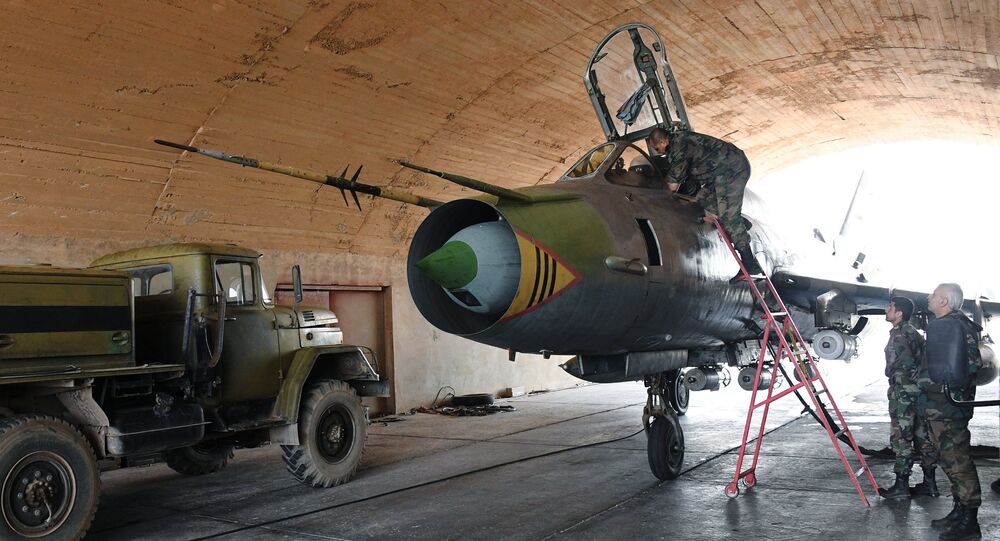 With its missile attack on the Syrian military airfield in Ash Sha'irat near Homs, the US tried to demonstrate to the international community and the American society that it is still an active player in a region where Russia has gained strength, Turkish opposition politician Ozturk Yilmaz told Sputnik Turkiye.

© Sputnik / Mikhail Voskresenskiy
Assad: Washington's Attack Fails to 'Raise the Morale of US-Backed Terrorists'
Following the US attack on the Syrian air base, Sputnik Turkiye sat down with Turkish politician, Vice-chairman of the country's main opposition Republican People's Party Ozturk Yilmaz to get his opinion, and Turkey's position, on the issue.

According to the Turkish opposition politician, the attack has two purposes. The first is an attempt to shape US public opinion. The Trump administration, he said, has found itself in quite a difficult position now due to lingering speculation over Russia's alleged interference in the US presidential campaign.

"The Democrats jumped at this chance after public opinion became particularly sensitive towards the issue. If Trump's opponents were successful in implementing their plan, they could have brought him to court as a president whose presidential victory was manipulated. This was the plan of Trump's political opponents," Yilmaz told Sputnik.

The order to launch a missile attack on the Syrian air base was aimed at demonstrating to the American public that Trump owes nothing to Putin and there are no agreements between them, the Turkish politician suggested.

As for the second goal, he said, it about the new US administrations ambitions for Syria.

"There is an impression that with the departure of Obama and the arrival of Trump, the Syrian issue has been basically left to Russia. The Astana and Geneva talks have demonstrated an evident strengthening of Russia's positions in Syria against the weakening of the US' role in the region," Yilmaz said.

© Sputnik / Mikhail Voskresenskiy
Dangerous Trend: US Attacks on Syrian Army Doing Nothing but 'Aiding Terrorism'
There is also an impression, he continued, that the US is interested only in the territories to the east of the Euphrates, the area under control of the Syrian Kurdish Democratic Union Party (PYD) while other areas have basically come under Russia's control.

The assault on Aleppo, the politician said, had intensified the understanding that the Turkey-based opposition is losing. The US meanwhile is watching it aloof.

Thus the attack, Yilmaz suggested, was aimed to change such a perception. The US tried to show it still has influence in Syria and has a role in defining its future.

With regards to Turkey's position on the issue, the opposition politician noted that Obama has left the country's ruling Justice and Development Party (AKP) half-way towards the toppling of President Assad.

"Washington suddenly realized that if Damascus falls into the hands of the radical elements, they will become even more dangerous than Assad. Thus they have dropped the idea of ousting him," he told Sputnik.

Meanwhile, Russia has strengthened its influence over Syria, he said. Without the expected support of the US, the Turkish authorities attempted to cooperate with Russia in Astana.

However, he said, Russia's proposed draft of the new Syrian constitution and proposed autonomy [for the Syrian Kurds] has caused serious concern for the AKP.

© Sputnik / Mikhail Voskresenskiy
'Fear and Ruins': First-Hand Account of the Aftermath of US Strike on Syrian Airbase
As the result, the politician said, Turkey is once again is turning its back on Russia and demonstrating that it is operating jointly with the US.

This, in turn, means that both the Astana and Geneva peace talks are under serious threat, he noted.
Yilmaz however criticized Turkey's support of the US activities.

"The Turkish authorities should not have used such a sharp rhetoric, demonstratively siding with the US. There is no sense and no logic in burning all the bridges in the relationship with Russia by supporting the US' aggression on Assad and putting at risk the still ongoing process of normalization of the relationship with Moscow," he said.

He added that Turkey needs to pursue more reserved policies in the settlement of the Syrian conflict. Ankara does not have a clear strategy on this issue. It either tries to act jointly with Russia or rushes to support the initiatives of the US.

"Such a tossing from one player to another has already had a negative impact on Turkey's image in the region, its power and its perception on the international stage," he finally stated.