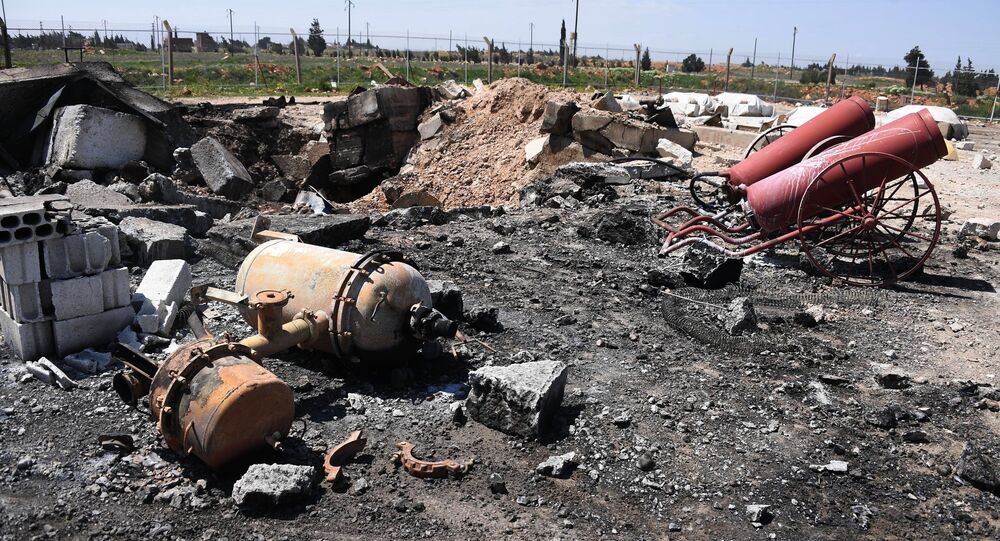 MOSCOW (Sputnik) — On Sunday, Reuters reported, citing a joint command center allegedly comprising the forces of Russia, Iran and militias supporting Assad that the recent US missile attack against the Syrian Ash Sha’irat airfield had crossed "red lines." According to the media outlet, the allies would respond to any new aggression and increase its support for Damascus.

"We are not aware about that, we cannot confirm that and we do not know where Reuters got this and where these anonymous sources appeared from again," Peskov told reporters.

© Photo : Youtube / Rachel Maddow Show
Twitter Obliterates Mainstream Media Hack Over Claim That Putin & Trump Colluded in Syria Strikes
On April 7, the United States launched 59 Tomahawk cruise missiles at the Syrian military airfield in Ash Sha’irat. US President Donald Trump said that the attack was a response to the alleged chemical weapon use in Syria's Idlib province on April 4, which resulted in the death of over 80 people, an incident which Washington blames on the Syrian government.

© Sputnik / Mikhail Voskresenskiy
The Worst is Yet to Come? US Nurturing Plan of 'Full-Scale Invasion of Syria'
The US missile attack claimed the lives of 10 people, an officer of the Syrian Armed Forces told Sputnik. The Russian Defense Ministry said that the attack left two Syrian servicemen missing, four killed, and six suffering severe injuries from the fire. Homs Governor Talal Barazi said on April 7 that at least two civilians from a nearby village and five Syrian servicemen were killed.