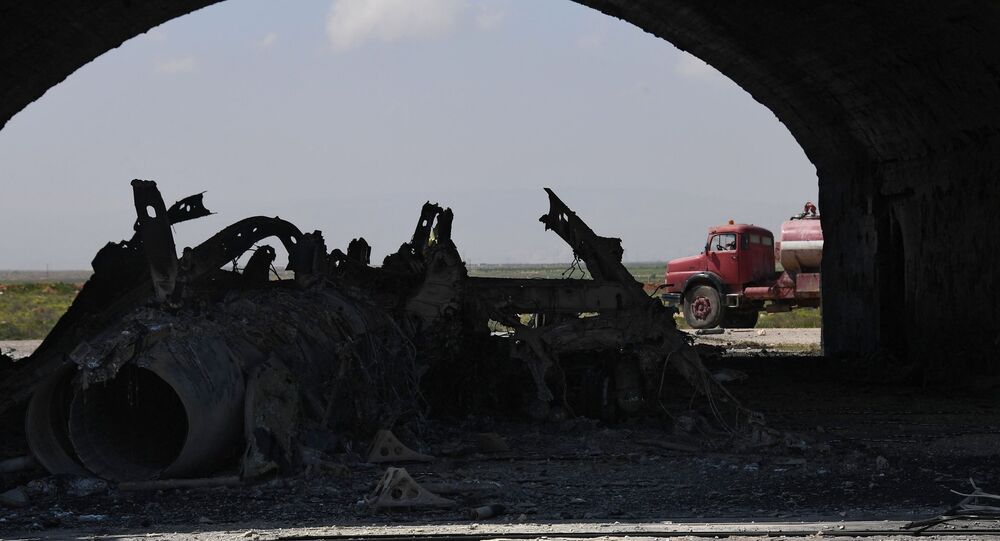 In an interview with Sputnik Germany, Jens-Peter Steffen of the Physicians for the Prevention of Nuclear War (IPPNW) warned of the escalation following last week's US missile attack on a Syrian airbase, which he said "may destroy everything."

© REUTERS / Ammar Abdullah
What US Officials Fail to Mention When Blaming Assad for Idlib Chemical Attack
The possibility of escalation following the US missile attack on a Syrian airbase last week "may destroy everything," Jens-Peter Steffen of the German office of the Physicians for the Prevention of Nuclear War (IPPNW) told Sputnik Germany.

On Thursday night, at least five people were killed and seven others injured after the United States launched 59 Tomahawk cruise missiles at the Syrian military airfield in Ash Sha'irat, located about 40 kilometers (25 miles) from the city of Homs.

© REUTERS / Ammar Abdullah
A man breathes through an oxygen mask as another one receives treatments, after what rescue workers described as a suspected gas attack in the town of Khan Sheikhoun in Idlib, Syria April 4, 2017

Steffen, for his part, warned that the attack had far-reaching consequences, saying that the use of chemical weapons in Idlib province is yet to be verified.

"Another aspect is that we see this attack, with the use of almost 60 Tomahawk missiles, as a violation of international law," he added.

Steffen called for a full-fledged international investigation into the chemical attack, which he said should be conducted in line with the Convention on the Prohibition of Chemical Weapons.

© AP Photo / Elise Amendola
Idlib Attack: 'Non-Existent Chemical Weapons Became Reason to Invade Iraq'
Referring to the US missile strike on the Syrian airbase, he said that "these events sadly confirmed the IPPNW's doubts related to the so-called new eastern policy of the Trump administration."

According to him, the Geneva talks on Syria are currently under threat due to "this excessive reaction of the US administration," which he said may prevent the warring sides from sitting down for parleys in the future.

"From our point of view, it is absolutely necessary to contribute to the ceasefire regime by notably promoting talks on a general ceasefire agreement and lifting the anti-Syrian sanctions, which will in turn add to the reconstruction of Syria. We are concerned that the escalation we are now facing could destroy everything," Steffen said.

He added that over the past few years the Syrian conflict had turned into "a clear-cut hybrid war," which he said "is just the tip of the iceberg in the Middle East, a region that is full of violent military conflicts."

Czech Member of European Parliament Katerina Konecna, for her part, said on her Facebook page that she harshly condemns the US missile attacks on Syria and that "[US President] Trump is simply trying to divert attention from his disastrous domestic policies by intervening in an already extremely complicated and non-transparent conflict."

"The [move to] launch the Tomahawk missiles, without considering the results of an international investigation of the chemical attack, is little more than a cowboy-like way of showing one's own ambitions, which does not resolve anything. It adds fuel to the fire and cynically disregards ordinary Syrians and their desire to live peacefully," she said.

Meanwhile, Russian Foreign Ministry Spokeswoman Maria Zakharova said that the US attack in Syria has nothing to do with attempts to uncover the truth about the use of chemical weapons in Idlib province.

She added that Russia had a number of questions for the United States regarding its strikes on the Syrian airfield, and that the questions would be addressed to US Secretary of State Rex Tillerson, who is set to visit Russia next week.

The Syrian opposition claimed on Tuesday that forces loyal to President Bashar Assad had allegedly used chemical gas against people in the northwestern province of Idlib, killing nearly 80 and injuring 200 more.