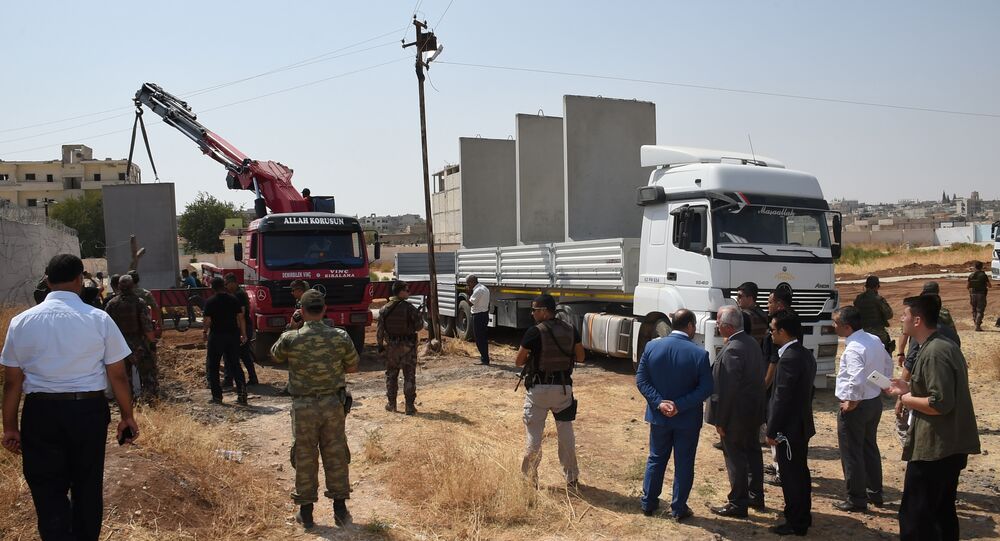 The Russian Foreign Ministry said Ankara had cut the transfer of goods and the movement of terrorists across its border with Syria.

WASHINGTON (Sputnik), Tatyana Kalmykova — Ankara has implemented significant measures to enhance control over part of the Turkish-Syrian border to stop illicit trafficking conducted by the terrorist group Daesh, which is outlawed in many states, including Russia, Deputy Director of the Department of New Challenges and Threats of the Russian Foreign Ministry Dmitry Feoktistov told Sputnik on Monday.

"Turkey undertook significant measures to strengthen a part of the Turkish-Syrian border, though which those goods were transferred, as we can register this," Feoktistov said.

© Photo : Youtube/Sputnik
Turkey Building 'Great Wall' on Border With Syria to Keep Terrorists Out (VIDEO)
The diplomat pointed out that Ankara also took measures to stop terrorists from crossing through the Turkish-Syrian border.

Turkey shares a 911-kilometer (566 miles) border with Syria. Ankara has been stepping up security on the border with Syria during last the several years, in particular by constructing walls made from concrete blocks and increasing the number of military officers. In late February, media reported that Turkey had already constructed half of the planned border wall.

Russia, US May Elaborate Draft Resolution on Trade Embargo Against Daesh

Syrian Conundrum: How Turkey 'Gets Caught on the Hook' by US