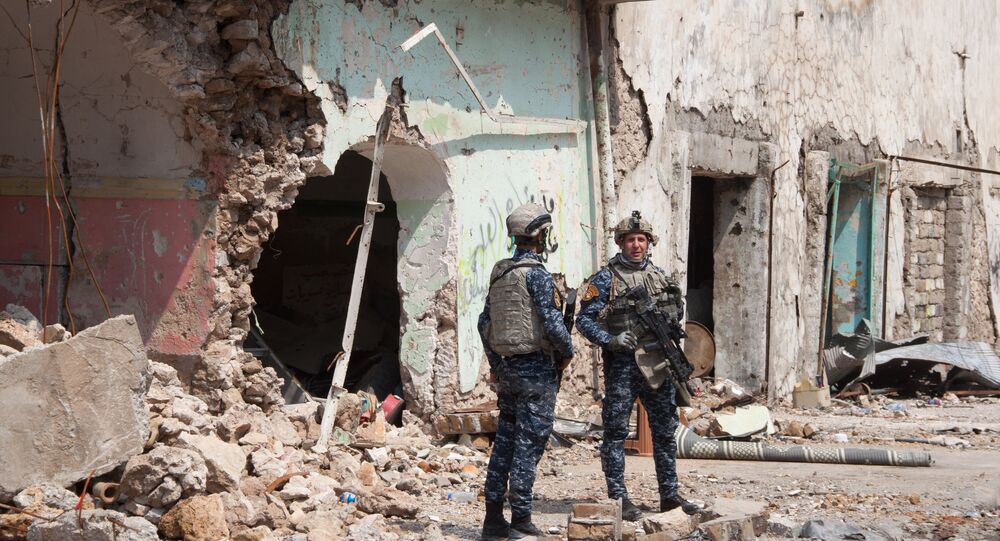 Amid the ongoing offensive to liberate the parts of the Iraqi city of Mosul which still remain in the hands of Daesh militants, RIA Novosti correspondent Rafael Daminov reports on everyday life at the frontline.

"I am in the Bab al Jadid district of western Mosul. The sky is buzzing with helicopters and shooting can be heard in every direction: dozens of federal forces servicemen are striking at the positions of the terrorists with all types of weapons at intervals of mere seconds, sparing no ammunition," reads Daminov's first-hand account from the frontline.

The servicemen explain that if they stop shooting, the terrorists will launch an assault using suicide bombers and cars rigged with explosives. Amid the heavy shooting of the federal forces, the militants respond with occasional sniping and mine throwing.

The author also notes the heavy stench in the air, as a body of a killed militant still remains on the ground due to the heavy shooting which has been going on for a fourth day in a row.

The fiercest fighting rages at the approaches to the Old City, he says. The units of the federal police and rapid deployment units of the country's ministry of internal affairs have formed a semi-circle in the area, cornering up to a thousand militants. Most of them are Iraqis, however there are a large number of residents from other Arab countries, Europeans, Chinese and natives of the countries of the Commonwealth of Independent States, the former countries of the Soviet Union, who mostly hold senior military posts.

"The terrorists have lost two thirds of the territories under their control during the 1.5 months of the government assault on the city, now have a stranglehold on the narrow streets of the Old City," Daminov says.

No armored vehicle able to protect infantry units will be able to move there. Besides, the militants have planted mines around their positions, one federal police lieutenant told the correspondent.

"While advancing, we are easy targets to the militants and so we experience losses," the lieutenant said.

Daminov explains that for the last ten days the assault has been almost stopped due to the halt of the aerial support of the US-led coalition after a series of the erroneous attacks on civilians.

The Great Mosque of al-Nuri

The front-line reporter notes that police snipers have taken up positions on the top floors of a nearby building. One of them has pointed out the leaning 'al-Hadba' ("the hunchback") minaret of the Great Mosque of al-Nuri, which still has the black flag of the terrorists flying from it.

Built over 800 years ago, it remains one of the most famous landmarks in the Old City. However it is also of great symbolic importance in the government's battle against the jihadists, who seized control of the city in June 2014.

© AP Photo / Felipe Dana
Children play inside a damaged car, amid heavy destruction in a neighborhood recently retaken by Iraqi security forces from Islamic State militants on the western side of Mosul, Iraq, Saturday, April 1, 2017

The mosque is where Daesh leader Abu Bakr al-Baghdadi made a rare public appearance the previous month and gave a speech proclaiming the creation of a new "caliphate."

According to the federal police forces, the retaking of the Mosque will strongly undermine the morale of the militants. A week ago, head of Federal Police Raed Shaker stressed the importance of the advance to this particular object. According to his latest reports, the police units have only advanced 350 meters towards it.

© REUTERS / Ari Jalal
Up to 500,000 People Fled Mosul Since Beginning of Military Operation
One of the officers of the rapid deployment units of the country's ministry of internal affairs told Daminov that his units are going to fully encircle the terrorists in the Old City any day now and that's why they expect the militants to start breaking through the tightening cordon.

"The plan is to encircle the terrorists in the Old City. The militants are furiously resisting in an effort to prevent it. However when the circle starts locking, the terrorists will flee from these districts relocating to neighboring ones, it's their tactic. We keep this in mind as it allows to reduce the victim count," the officer told the correspondent.

Living on the frontline

It is hard to believe, but Daminov says that people are still living in the houses on the frontline. A family of three lives in a room next to the positions of the snipers, without any reaction to the loud shooting and machine gun fire. The head of the family, 40-year-old Khaled brings tea to the officers while his wife Iman cooks them food.

Khaled says that they have got used to the sounds of war long ago and have no desire to leave for a refugee camp.

"This is our home, why should we flee to a refugee camp? There are no conditions there while here officers help us to survive and share food," the man told the journalist.

The family says that recently they have been eating only water-thinned flour and were afraid to look out into their street, which was under heavy fighting.

Iman told the journalist that until their retreat, the terrorists obliged the local residents to keep the doors of their apartments wide open for them to be able to run from building to building. The militants threatened to execute anyone who locked their doors. She also said that they were very afraid when the terrorists where shooting at the positions of the federal police and their helicopters from the roof of their building.

"We were very afraid that they will drop bombs on us because of these terrorists. After the terrorists shot at a helicopter or at officers, a plane would appear in the sky and the building they were shooting from would be bombed or struck at, civilians would then die," the woman said.

© REUTERS / Youssef Boudlal
Daesh Militants Flee Mosul Hiding Among Civilians
Daminov revealed that a family of eight live in the nearby ruins of a house. They say they lived in a suburb of Mosul already retaken by the army. However they can't return to their home as the army units are quartered in their settlement.

"We have been living on the outskirt of the settlement when the government units advanced towards it. The terrorists then told us to relocate to the center of the settlement to serve as a human shield for them," one of the family members told the journalist.

He added that the terrorists won't let civilians flee the areas under their control, labelling those who were able to escape as "traitors" and "defectors from the territory of the caliphate to the land of unfaithful."

The fleeing people are being shot at regardless of their age, Daminov said. One of his acquaintances, a French military photographer has seen dozens of women and children in a Mosul hospital, with bullet holes in their backs and heads. There were babies among them.

The journalist then said that according to the mayor of the city, up to 150,000 people still remain in the areas controlled by the terrorists.