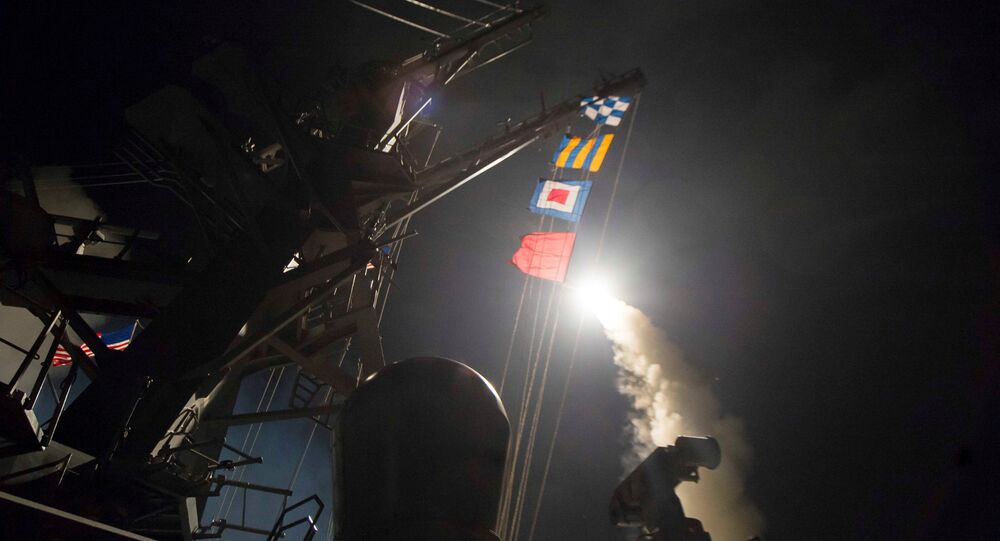 Why US Attack in Syria Seems to Be 'Pre-Planned'

The US missile attack on Syria was de facto in the interests of terrorists, said Kremlin spokesman Dmitry Peskov. It was the first direct US strike targeting the Syrian government. Radio Sputnik discussed the issue with Dr. Taleb Ibrahim, Syrian political analyst and deputy director of Damascus Centre for Strategic Studies.

“This is an act of aggression against the Syrian Army and against the Syrian state. It is very clear that the US has its own agenda in supporting terrorist groups and is trying to change the legitimized Syrian regime by force,” Ibrahim said.

He further said that he is suspicious of the real motives of the US. The missile attack has affected the Syrian Arab Army which is already fighting terrorist on multiple spheres.

“This attack has given real support to the militant groups, a real psychological support to those who had started to collapse in different places all around Syria,” the analyst said.

Talking about whether this strike was in line with international law, the analyst said that it was not.

“This is a pure violation of international law and I think the United Nations allows this because this attack wasn’t under the blanket of the Security Council. The United States couldn’t obtain any resolution because of the Russian opposition and the Chinese. There wasn’t a real investigation about the attack in Khan Shaykhun,” Ibrahim said.

He further said that according to him the chemical weapons were smuggled through Turkey.

© AP Photo / Ford Williams/U.S. Navy
US Actions in Syria Damaging to Chemical Attack Investigation - Bolivia UN Envoy
“The bombing of the chemical weapons store may have prevented the terrorists from using it in a much larger attack against the civilians. The causalities could have been in the thousands. But it is clear that the US was preparing to attack the Syrian Arab Army on their own agenda,” the analyst said.

According to the analyst considering that there is no evidence regarding who was behind this attack, it is possible that the US is using this situation as a pretext to attack Syria.

“You cannot launch an attack by cruise missiles in 24 hours or in two days. You need to prepare cruise missiles for weeks. You must program it because such missiles are very high accuracy weapons and they need extensive programming. It cannot be done just within days or hours like the US did,” Ibrahim said.

He further said that the US wants to support Daesh and al-Nusra Front because they are nothing more than “a part of the Special Forces of the CIA, they are not independent groups.”

Daesh attacked Palmyra at the same time that the US was launching its strike hence, according to the analyst, it seems like the two attacks were preplanned.

Talking about what will happen next, the analyst said that the US will never send boots on the ground like they did in Iraq because of their defeat in Iraq.

“The US doesn’t need to send its army into Syria because ISIS [Daesh] and al-Nusra Front are fighting for its behalf. If US tries to occupy Syria like it did in Iraq in 2003, this will be impossible because of Russia, as it is securing the Syrian nation,” Ibrahim said.

Talking about Damascus, the analyst said that the government is patient and it will continue its efforts to fight terrorism.

© AFP 2021 / SAUL LOEB
US Envoy to UN on Syria Attack: 'We Are Prepared to Do More'
“The Syrian Army will intensify its campaign against the terrorists and I think Russia will provide, as we heard today, anti-missiles to Syria. They will bolster the capabilities of the Syrian Army. And if there is a mad man in the United States that wants to wage war against Russia or against Syria, nobody will want such a war,” the analyst said.

US Navy ships in the Mediterranean fired 59 Tomahawk missiles at a Syrian air base. It is the first direct US strike against the Syrian government. Russia has condemned the strike, calling it an act of aggression.

The missile attack comes days after a chemical attack in Syria killed 80 people and injured nearly 600. The Syrian opposition, the US and EU countries put the blame for the attack on the Syrian government, which denies the accusations.

US President Donald Trump said by ordering US airstrikes on Syria he had acted in America’s “vital national security interests” to prevent the use of chemical weapons.

During his presidential campaign Donald Trump said that Washington should focus on fighting terrorism than trying to change the government in Damascus.

US Attack in Syria 'Praised Throughout the Globe' - White House