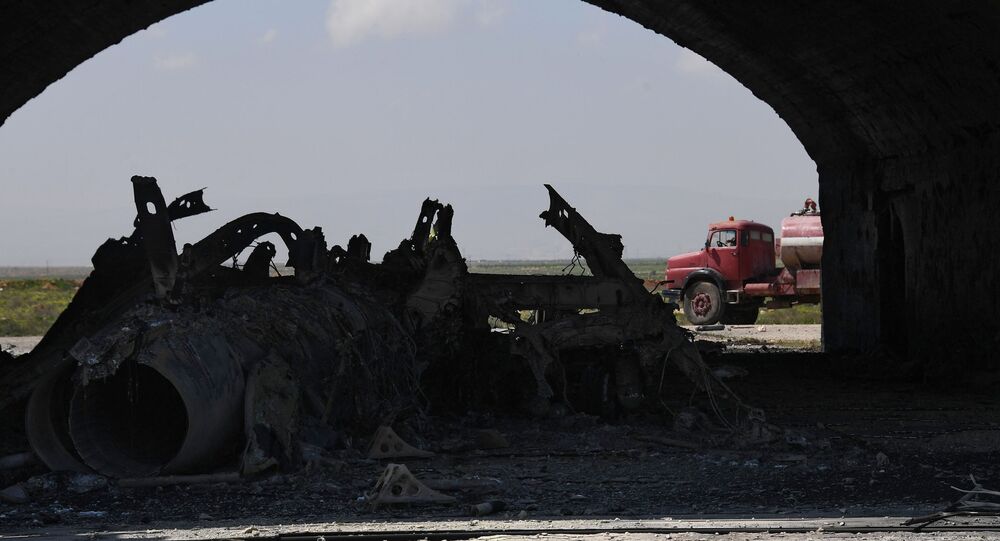 Syria's Ash Sha'irat airfield, hit overnight by US missile strikes, was used by the Syrian forces as a major outpost in the fight against Daesh terrorist group, outlawed in many countries, including Russia.

MOSCOW (Sputnik) — The United States launched 59 Tomahawk cruise missiles at the airfield late Thursday. US President Donald Trump said the attack was a response to the alleged chemical weapon use in Idlib on Tuesday, which Washington blames on Damascus.

Prior to the beginning of the Syrian conflict, the country had an extensive network of military bases, counting up to two dozens.

© REUTERS / Omar Sanadiki
Syria Calls US Tomahawk Missile Attack on Airbase 'American Aggression'
With the outbreak of the civil war some of those bases were captured by militants and Islamists, with many becoming partially inoperable due to constant bombardment during hostilities.

So far, the Kurdish-led Syrian Democratic Forces (SDF) have been fighting against Daesh in northern Syria to establish control over Al Tabqa military base. While in the east, the Syrian army is combating the terrorists for the control over the Deir ez-Zor base.

Considering a small number of undestroyed military bases, Ash Sha'irat airfield and Hmeymim air base have been playing a significant role in counterterrorism operations.

Ash Sha'irat, located in central Syria, has been used during all the six years of the civil war. According to reports, apart from MiG-21 helicopters, a number of warehouses with ammunition were located there. Russian air forces, deployed at Hmeymim, also reportedly used Ash Sha'irat as a staging base on the way to Palmyra.

The Syrian forces used Ash Sha'irat military base to fight in a war on two fronts, and used it as an air base, a base for ground troops and warehouses.

© Sputnik / Michael Alaeddin
US Missile Attack in Syria Was 'De Facto' in Terrorists' Interests - Kremlin
Though the Syrian authorities and militant groups in Homs reached in March an agreement, with Russian mediation as the guarantor, allowing militants and their families to leave Homs, the fighting continued.

The Syrian troops are combating armed opposition to the north of Homs, with the fighting exacerbating in early April, when the militants launched an offensive on a Syrian Christians settlement.

To the east of Homs the Syria army is fighting against Daesh group, which is currently in 9-10 kilometers (5-6 miles) away from Palmyra, liberated from Daesh for the second time earlier this year.

According to Islamists statements on Twitter, Daesh launched an offensive on Homs-Palmyra route simultaneously with the US attack on Ash Sha'irat.

Homs Governor Talal Barazi told Sputnik on Friday that strikes were an act of US aggression against a base, playing a key role in the anti-Daesh operations.

"The Syrian army and armed forces are fighting terrorism, especially in the east of Homs. And recently significant progress has been reached, gas fields have been liberated as well as the city of Palmyra and its surroundings. This base to the east of Homs plays a key role in supporting military operations against Daesh, particularly in the eastern part of Homs," Barazi said.

The US attack followed Tuesday alleged chemical weapon attack in Syria’s Idlib province, which claimed the lives of some 80 people and inflicted harm on an additional 200 civilians. The Syrian National Coalition of Revolutionary and Opposition Forces, that reported the attack, as well as a number of Western states blamed the Syrian government troops for the attack, while Damascus has refuted these allegations.