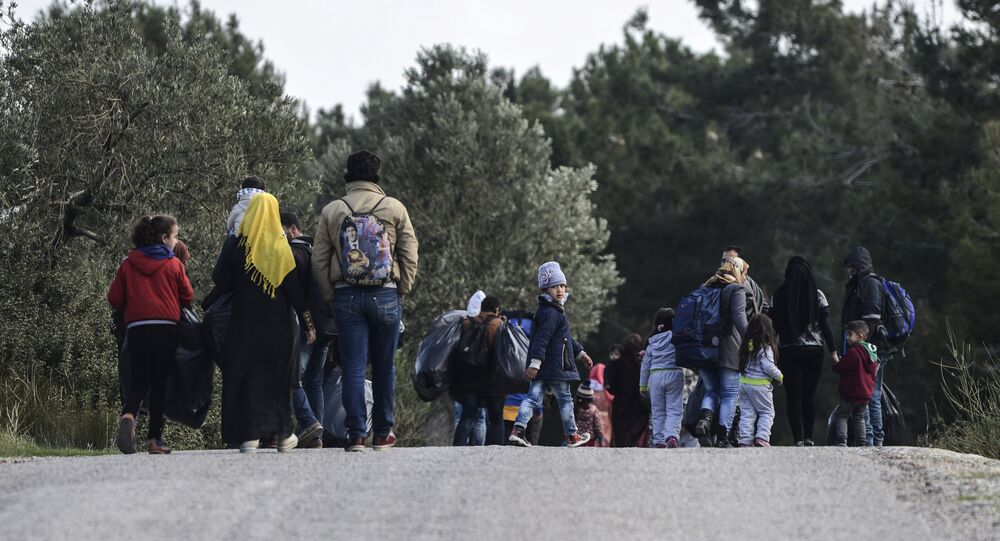 The Turkish city and the province of the same name Izmir, bordering Greece, continues to host a large number of refugees from Syria. Some of them intend to continue their journey to Europe while others dream of returning home after the war ends in their homeland.

Sputnik Turkey takes a look at how Syrians who have settled in Izmir are trying to start a new life from scratch in a foreign country.

Flow of refugees has declined

© AP Photo / Lefteris Pitarakis
Turkey Considering Granting Citizenship to Qualified Syrian Refugees - Erdogan
Before an agreement between Turkey and the EU regarding the settlement of refugees was signed on March 18, 2016, approximately 2,500 people were transported daily from Turkey to Greece by sea.

After the document was signed, the number was reduced to 100 people. In view of the fact that most of the migrants came from areas close to the Greek islands, Izmir was seen as a kind of “gateway to Europe.”

According to the Department of Migration, there are about 107 thousand Syrians currently registered in Izmir.

The Kapilar district in Izmir is famous for housing refugees. The House of Solidarity and Assistance to Refugees is where most of the migrants from Syria go to.

The organization was created by Yalchin Yanik, who considers himself an Afro-Turk — his grandfather was brought to Izmir as a slave 200 years ago.

Yanik considers himself to be “one of the oldest refugees.”

He told Sputnik Turkey that about 80-100 refugee families come to the House of Solidarity every day. Yanik and his team try to meet all their needs in terms of food, clothing, medicine and books.

“The public brings a lot of items specially food and blankets. Turkish people show their hospitality and many people from the municipality show solidarity and that is very important,” Yanik said.

© AFP 2020 / ADEM ALTAN
Turkey to Construct Tent Camp for 80,000 Refugees From Aleppo
He further said that on weekends people come to teach and give lessons to the refugee children.

“The world is not without kind people and that is good. Of course, if there was no war, people would not have been here in this situation. If the war ended, they would return to their homeland,” Yanik said.

Life is tough for refugees

One of the residents of the House of Solidarity, Ahmed from Aleppo, spoke to Sputnik Turkey, saying that he came to Gaziantep three years ago and then moved to Izmir where he and his family were housed in the Agora area.

At 52, he isn’t working but his son works in the city as a builder.

“Life here is tough but I do not want to go to Europe, especially don’t want to go illegally by boat or ship. It can cost me my life. How can a person consciously endanger his life?” Ahmed said.

He further said that when the war is over he would want to return back home, to Aleppo.

A refugee named Muhammed also spoke to Sputnik Turkey saying that he wants to return to Syria but it is unclear when the war will end.

“Of course, I want to return to Syria, but it's unclear how long this war will last. If I have the opportunity, I would like to go to Europe, but for now we live here and life is very tough,” Muhammed said.

© Sputnik / Valery Melnikov
Over 40% of Syrian Child Refugees Missing Out on School - UNICEF
Another resident of the house, a 35 year-old woman named Afshin Mustafa, is working in a factory in Izmir. Her five children go to school and her husband is back in Syria.

A few of her relatives have moved to France but Afshin isn’t so optimistic about going to Europe.

“I would go if the living conditions over there were better but if it is not so, then what's the point of leaving here to start life from scratch again?” Afshin said.

The majority of buildings in which the refugees reside are in very bad condition. The infrastructure and the apartments in these buildings are dilapidated but that doesn’t stop the owners of these flats from charging the refugees high rent prices.

“The authorities proudly say that Turkey has hosted 3 million Syrians but look at the conditions in which these people live here, can this be called hospitality? We feel so sorry for these poor people,” one of the residents of the quarter said.

“The moment I find out that the war is over, I will immediately return home the same day. Can a man ever find a substitute for his homeland?” 45-year-old Sardar al-Hashim said.