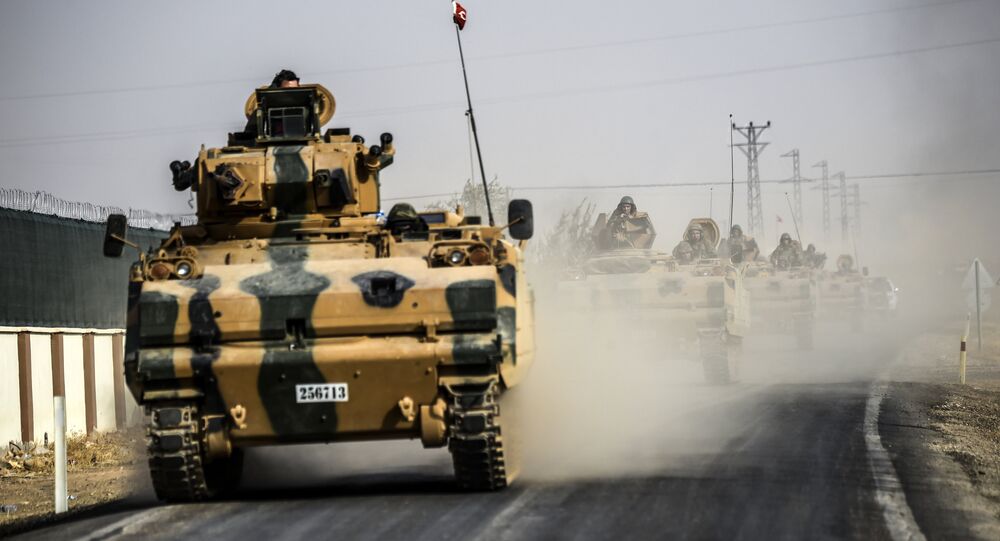 © AP Photo /
Washington 'Knows Damascus Has No Chemical Weapons', But Still Blames Assad
Senior US and European officials, including President Donald Trump, accused the Syrian Arab Army (SAA) of using chemical weapons in an attack that took place in the town of Khan Shaykhun located in the rebel-held province of Idlib, but have provided no evidence backing these claims.

The SAA's command dismissed these accusations, saying that radical armed fighters and their sponsors were responsible for what happened on Tuesday. The Russian Defense Ministry said that the Syrian Arab Air Force carried out an airstrike targeting a large militant ammunition depot and military hardware in the eastern part of the town. A lab which was used to produce chemical weapons was also located in the affected area.

In addition, many have pointed out that Damascus does not have chemical weapons since it destroyed its stockpile following a deal brokered by Russia in 2013.

© AP Photo / Alexander Kots
Nowhere to Hide: Tunnels Won't Save Terrorists in Hama From Syrian Artillery (VIDEO)
Syrian Ambassador to Russia Riyad Haddad told Sputnik about the other component of the campaign targeted against Assad. He said that Turkey has unilaterally moved its border deeper into Syrian territory and created camps to train militants in the area, adding that such activities violate the country's sovereignty.

According to Haddad, Ankara-led troops moved into the villages of Kyubat and Atme in the province of Idlib, as well as the town of Kessab located in the Latakia province.

"Turkish troops also entered the Dikmadash area in northern Afrin and occupied higher ground near this city where heavy equipment and armored vehicles are already located. This neighborhood belongs to the Jisr al-Shughur district, which in turn is part of the Idlib province. Turkish forces are preparing to build a wall that would separate the lands they had seized and our territory," the diplomat said.

Haddad pointed out that Ankara's activities contradict its earlier statement regarding the end of Operation Euphrates Shield.

The Turkish leadership launched Operation Euphrates Shield on August 24 to push Daesh and the Kurds out of cities and settlements located on Syria's border with Turkey. Last week, Ankara announced that its military intervention was over since the campaign reached its main objectives. The announcement made by the National Security Council did not specify whether Ankara plans to withdraw its forces from the region.

"In reality, Turkey was forced to wrap up its military campaign [in northern Syria]. Ankara was simply not allowed to take part in recapturing Raqqa, the so-called capital of Daesh's caliphate," Veselov explained. "The Kurds and moderate Arab militias were fiercely opposed [to Turkey's involvement]. Washington has de facto aligned itself with them."

Unable to carry out an operation in Raqqa, Turkey decided to focus on Idlib, the analyst added.