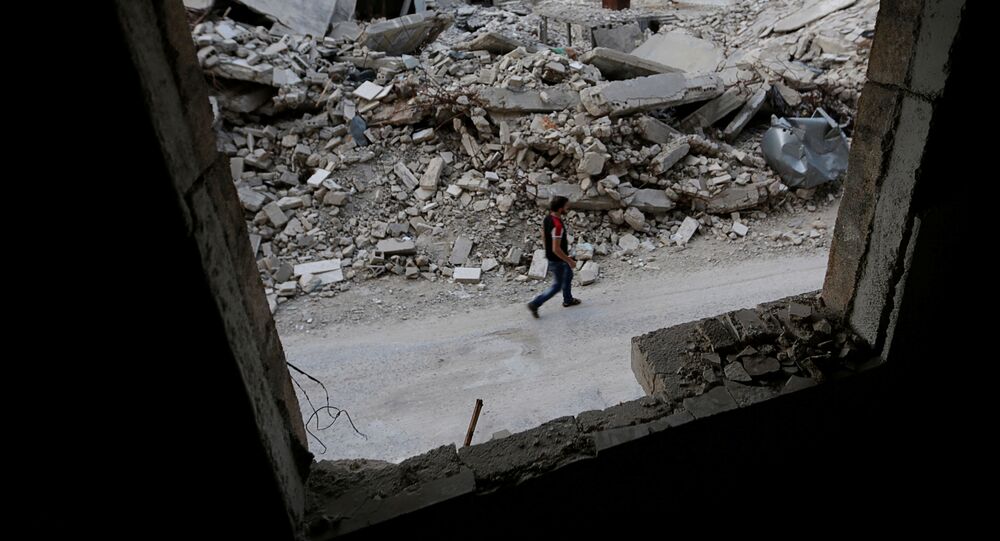 The National Coalition of Syrian Revolution and Opposition Forces urges to introduce the ban for flights of the Syrian government aircraft over the country in relation to the reported chemical attack in northwestern Idlib province, Vice-President of the coalition Abdul Hakim Bashar said Wednesday.

© AFP 2021 / Omar haj kadour
Moscow on Reports of Chemical Attack in Idlib: White Helmets, SOHR Aren't Reliable Sources
MOSCOW (Sputnik) — Syrian opposition claimed Tuesday forces loyal to President Bashar Assad had used a chemical gas on people in the northwestern province, killing nearly 80 and injuring 200. Assad argued his government has no chemical weapons after agreeing to have them destroyed in 2013. He also ruled out having used chemicals against own people.

He added that the Syrian crisis demands triggering Chapter 7 of the United Nations’ Charter allowing the Security Council’s intervention in the conflict for its resolution. Bashar characterized Tuesday’s Idlib attack as a "crime of the century" and a "landmark in Syria’s history."

© Sputnik / Mikhail Voskresenskiy
Kremlin on Chemical Attack in Idlib: Russia Will Continue Supporting Assad in Anti-Terror Fight
Bashar also urged Russia and Turkey to comply with their obligations as guarantors of the ceasefire in Syria.

On Tuesday, a source in the Syrian army told Sputnik that the Syrian army did not have chemical weapons and the allegations of the attack in Idlib could be part of anti-Damascus propaganda.

The United Nations and the Organisation for the Prohibition of Chemical Weapons (OPCW) have started investigating the incident.

On January 20, Syria’s President Bashar Assad said that the country’s government had never used weapons of mass destruction, including the chemical weapons, against Syrian people. Assad recalled that in 2013 Damascus had agreed to destroy its chemical weapons warehouses and did not have such weapons stored.