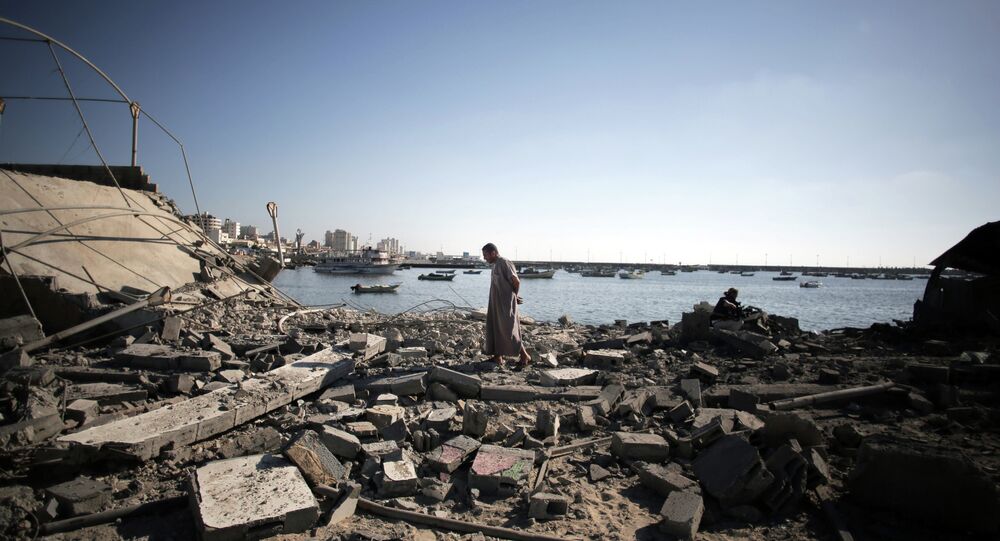 Access to and from the Gaza strip for human rights workers is being blocked by the Israeli military, preventing the adequate investigation of war crime allegations, a prominent watchdog stated in a report.

© AP Photo / Adel Hana
Israeli Forces Target Hamas After Projectile From Gaza Hits Country
MOSCOW (Sputnik) – On January 16, 2015, the International Criminal Court (ICC) prosecutor announced the opening of a preliminary examination into the situation in Palestine and alleged crimes committed in the occupied Palestinian territory since June 13, 2014. The examination includes analyzing whether alleged war crimes have been committed and whether national authorities are adequately investigating the claims.

"If Israel wants the ICC prosecutor to take seriously its argument that its criminal investigations are adequate, a good first step would be to allow human rights researchers to bring relevant information to light… Impeding the work of human rights groups raises questions not just about the willingness of Israel’s military authorities to conduct genuine investigations, but also their ability to do so," Sari Bashi, Israel and Palestine advocacy director at Human Rights Watch was quoted as saying by the organization Sunday.

The Unwilling or Unable: Israeli Restrictions on Travel to and from Gaza for Human Rights Workers report by Human Rights Watch, released on Sunday, outlines how travel restrictions, even in cases where security services have no claims against individual workers, prevent cooperation between human rights workers and limit access. HRW notes that, since 2008, the watchdog has only on one occasion received permission for foreign workers to access Gaza through Israel. It adds that, during the 2014 war, external weapons experts were prevented from entering Gaza by Israel and Egypt, leaving local experts responsible for analyzing forensic evidence from the conflict.

Over the decades, Palestinians have sought diplomatic recognition for their independent state on the Gaza Strip and the West Bank, which includes the partially Israeli-controlled East Jerusalem. The Israeli government, though, refuses to recognize Palestine as an independent political and diplomatic entity.

The 2014 conflict in Gaza killed over 2,100 Palestinians and 72 Israelis, according to UN figures. Israel and the Palestinians have since accused each other of war crimes. Israel is alleged to have used force indiscriminately, while Hamas is accused of firing rockets at Israeli civilian population centers.