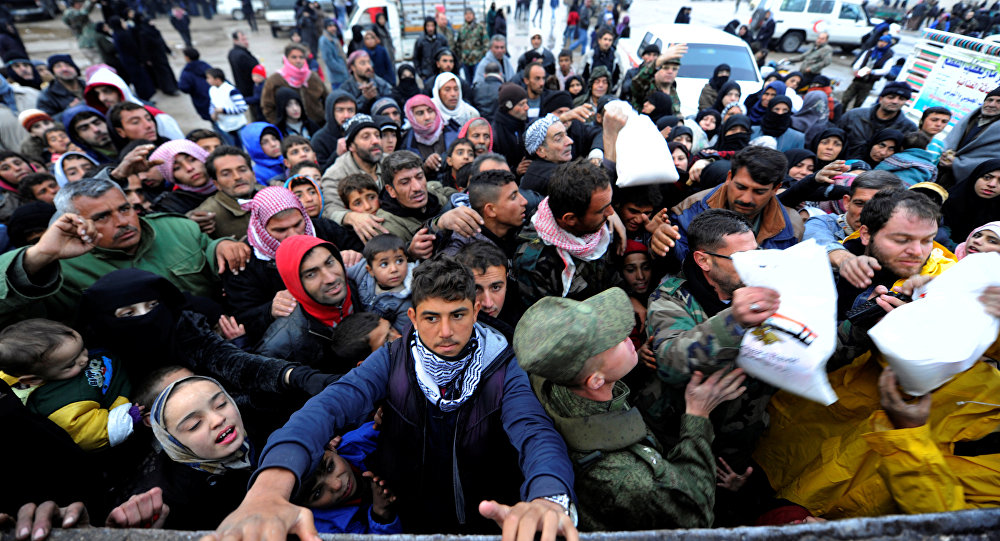 Russia has provided over 4,000 Syrians with humanitarian aid in the past 24 hours, having also helped deliver humanitarian cargo provided by the United Nations, the Russian center for Syrian reconciliation informs in its daily bulletin.

HMEIMIM (Sputnik) – Russian military has conducted a total of four humanitarian events in the provinces of Aleppo and Daraa, according to the bulletin.

"Within last 24 hours, the Russian Centre for reconciliation of opposing sides has held 4 humanitarian events in the provinces of Aleppo (3) and Daraa (1). … Civilians have also received 350 sets with food products and toys for children in Karfa in the Daraa province," the bulletin, posted by the Russian Defense Ministry on Saturday, says.

Overall, 4,192 Syrian citizens received humanitarian aid in the past 24 hours, according to the statement.

Russia has also helped deliver UN humanitarian cargo to the provinces of Damascus, Homs and Daraa. In addition, Russian aircraft have delivered over 20 metric tons of UN aid to the Deir ez-Zor area in Syria, according to the center’s bulletin.

© REUTERS / Omar Sanadiki
Change in US Stance on Syria Is 'What Trump Promised and Americans Voted for'
On Thursday, UN Under-Secretary-General and Emergency Relief Coordinator Stephen O'Brien told the UN Security Council that humanitarian aid access in Syria has not improved this year, with UN convoys experiencing difficulties in reaching those in need.

Russia has been providing Syrian civilians with medical help and regular humanitarian aid deliveries, including food, medicine, items of first necessity, and items for children on a daily basis, in order to help them survive until peace is restored in the country.

Russian planes have been facilitating the distribution of UN aid in Syria on a daily basis as well.