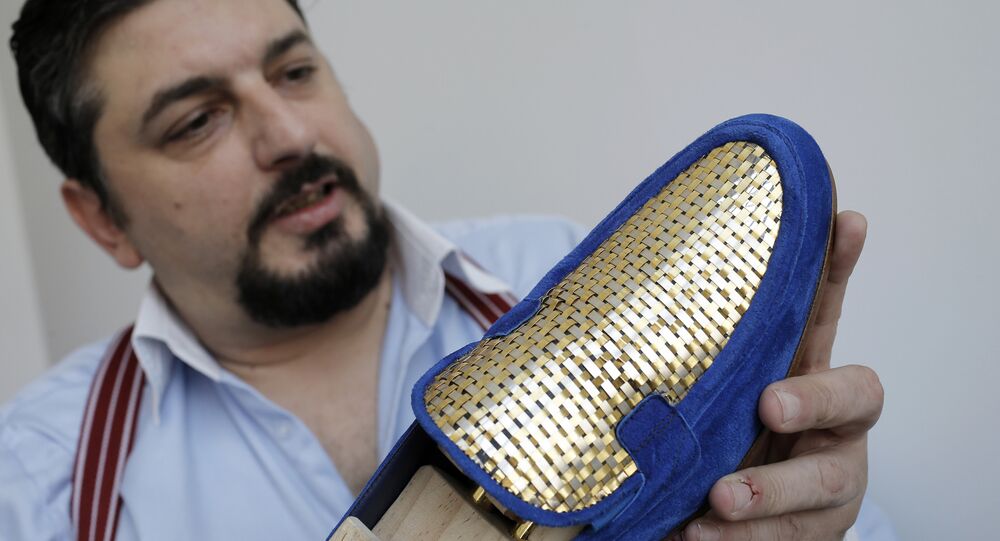 Italian designer and founder of A&V Fashion, Antonio Vietri, has embarked on a unique venture to make 24-carat gold shoes, which he plans to promote to the Middle Eastern market.

"These are the first shoes in the world in 24-carat gold, the particularity of these shoes is that gold is not simply applied, it is not like an accessory or a button. Gold is an integral part of the shoe," Vietri said in a recent interview.

These shoes are, it is safe to assume, aimed at the rich, those with money to spare. Vietri knows which type of person will fall in love with what he has to offer. His business is aimed at the extremely wealthy Gulf countries, which understand the power of gold.

​Each pair of shoes will be made using 230 grams of gold, ia one-of-a-kind shoe, made to measure with the help of 3D scanners. If the shoe is too tight, Vietri said the gold will bend.

Vietri is not the only Italian fashion designer to try and leave his mark in the Middle East.

According to experts there is a wave of "Made in Italy" producers, seeking to tap into the high-end Gulf fashion market, and they are heading straight to the oil-rich states such as the United Arab Emirates, Saudi Arabia and Qatar.

Dolce & Gabbana have also seen how lucrative the Middle East is. The Italian luxury brand had internet fashionistas swooning in 2016, when they launched their first ever hijab and abaya collection.

Delicate lace, satin-weave charmeuse, and bold Sicily-inspired floral prints had experts saying that the collection was a "game-changer" and an exciting "development" for Muslim women.

The Middle East has always been a lucrative part of the world for fashion and luxury items, and its thirst for high-end and expensive goods has made it a prime customer. Countries like Qatar and Saudi Arabia place huge importance on appearances and this is why logos and brand names are so critical to the lifestyle, as it demonstrates wealth, power and status.

Vietri's Gold Line For Men launched in 2016, however it took the designer eight months to reach this significant milestone. Now he is ready to launch his women's line and the possibilities are endless.

Its not just high-end products that Vietri produces, the shoemaker also has a less expensive range which starts at a mere US$300. In addition to this, he sells silk pumps embellished with gold or sliver, and customers can decorate their chosen model with pearls or diamonds.

These Shoes Were Made for Walking: Entrepreneur Develops Painless High Heels