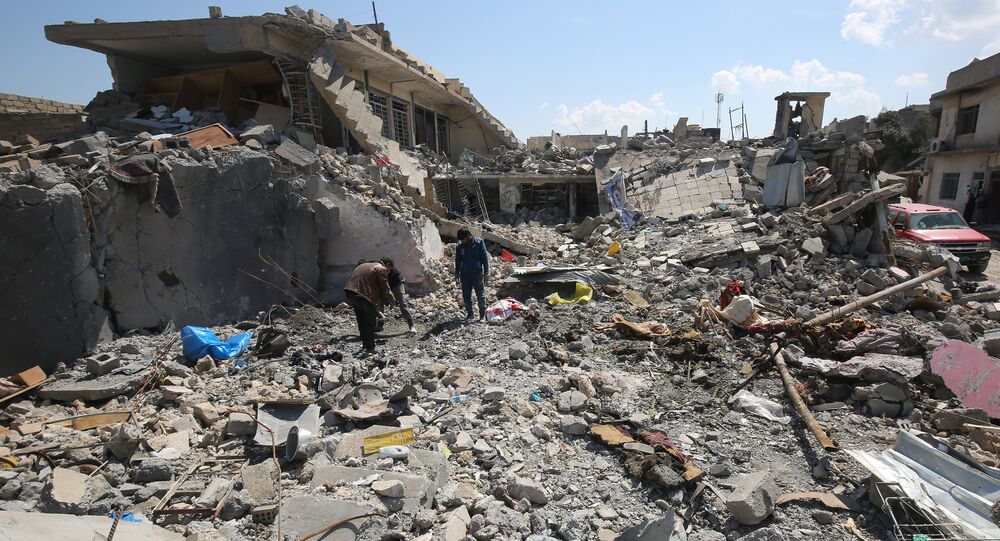 As many as 15,000 people have been fleeing Mosul every day since the start of the US-led coalition's most recent offensive started on February 19, Melany Markham of the Norwegian Refugee Council told Radio Sputnik.

Iraqi defense officials in Mosul have reported that more than 200 civilians have been killed in a recent airstrike carried out by the US-led coalition.

According to reports, the airstrike was carried out March 17 in the neighborhood of Mosul al-Jadida, where Iraqi and coalition forces are battling Daesh militants.

Iraqi Vice President Osama Nujaifi called the incident a "humanitarian disaster" and UN officials said they were "profoundly concerned” by the attack.

On Saturday, the Pentagon admitted carrying out an airstrike in that location and opened an investigation into the reports.

As conflict rages in Mosul, as many as 15,000 people a day are arriving at refugee camps outside the city, where and aid organizations are struggling to provide the resources for all of them.

The UN initially estimated that 250,000 people would flee Mosul as a result of the recent anti-Daesh offensive, but it has since revised its prediction to half a million.

© AP Photo / Khalid Mohammed
Humanitarian Disaster in Mosul 'Not Getting International Coverage It Deserves'
Melany Markham, Media Coordinator with the Norwegian Refugee Council (NRC), told Radio Sputnik that there are a lot of conflicting reports about what is happening in Mosul. NRC receives reports from people fleeing the city to refugee camps.

"We have heard a lot of conflicting reports about the destruction occurring in Mosul and some of the people who have been displaced and who have been aided by NRC have described entire homes being destroyed with the families in them," Markham said.

"However, the coalition has announced that they have opened an investigation into this recent incident which occurred on 17 March and the findings of that investigation should be determined over the next few weeks."

Refugees from Mosul have told NRC harrowing stories about what is happening there. It appears that as Daesh terrorists are losing control of the city, they are committing more crimes against the civilian population.

"We have heard some very distressing stories. One man who has fled Mosul told us that IS (Daesh) had invaded his home and said to the family, 'we're all going to die together.' There are very similar stories from almost family and every person who has fled," Markham said.

© AP Photo / Felipe Dana
Mosul Airstrikes: US Seeks to 'Shift Blame' for Civilian Casualties
There are conflicting reports about the number of civilian casualties killed as a result of coalition airstrikes in Iraq and Syria.

On March 4, the Pentagon said that a total of 220 civilians had been killed by the US-coalition in Iraq and Syria since the start of operations in 2014.

However, the monitoring group Airwars disputed that figure, saying at least 2,463 civilians had been killed.

On Saturday, Airwars reported a surge in civilian deaths as a result of US-led airstrikes in March.

"Almost 1,000 civilian non-combatant deaths have already been alleged from coalition actions across Iraq and Syria in March — a record claim," Airwars said.