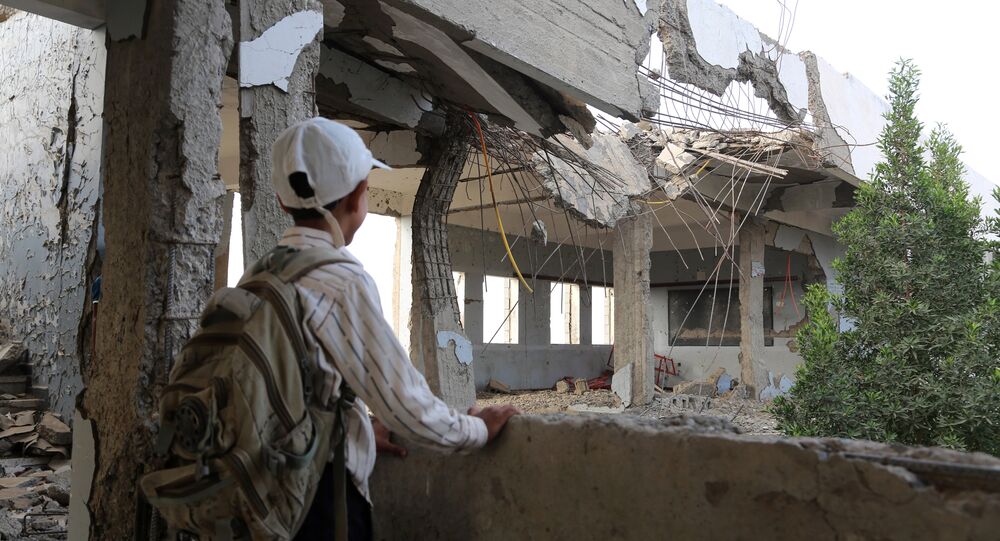 The operation of the Saudi-led coalition in Yemen has created $400 million worth in damages and left dozens of teachers and pupils dead in the wake of the ongoing hostilities, according to Ismail Zaidan, the information officer at the Ministry of Education of Yemen.

© AP Photo / Mohammed Zaatari
Saudi Coalition's Use of Cluster Bombs in Yemen 'Shows Callous Disregard for Civilian Lives'
SANAA (Sputnik) — The Saudi-led coalition of Arab states has destroyed over 2,300 schools in Yemen since its military campaign against the opposition Houthi movement began two years ago, Ismail Zaidan, the information officer at the Ministry of Education of Yemen, told Sputnik.

"The damage suffered by the education process as a result of the aggression against education institutions has reached 2,306 schools and other institutions, which were fully or partially destroyed," Zaidan said.

According to Zaidan, the operation has created $400 million worth in damages and left dozens of teachers and pupils dead in the wake of the ongoing hostilities.

© REUTERS / Khaled Abdullah
Starving Children in Yemen Risk Ending Up as Terrorists
Zaidan's comments mark the second anniversary of the start of the Saudi-led coalition's air campaign against the Houthis, which was launched at Hadi's request on March 26, 2016.

According to the latest UN figures the armed conflict in Yemen has resulted in over 14 million people becoming food insecure, and over 3 million people becoming internally displaced. In January, Jamie McGoldrick of the UN Office for the Coordination of Humanitarian Affairs said that the civilian death toll in the two-year conflict had reached 10,000, while 40,000 had been injured.