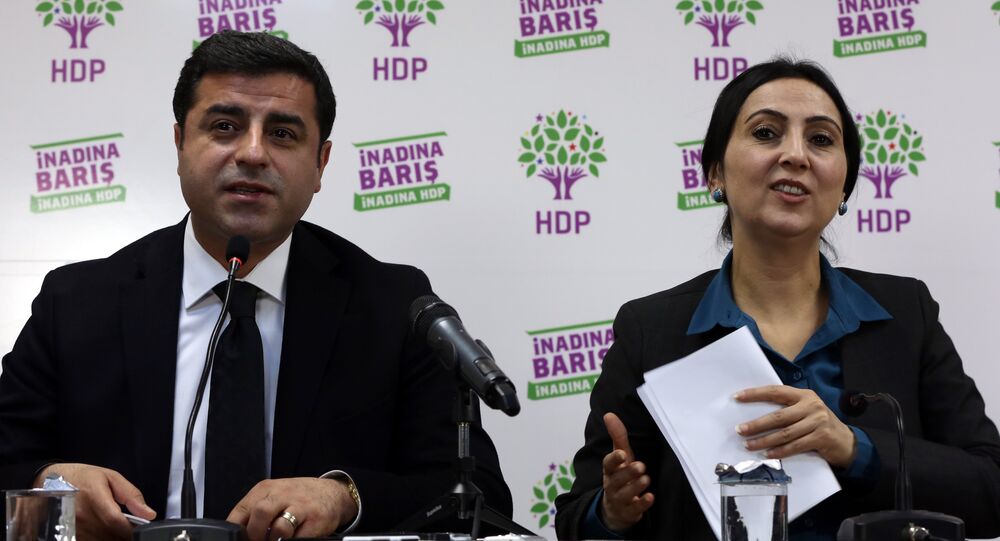 The crackdown on Turkish opposition has engulfed pro-Kurdish elements of society, with 13 parliamentarians jailed on terrorism charges. The government has also taken direct control of 82 municipalities in the country's Kurdish southeast region, suspending and incarcerating elected mayors, Human Rights Watch has revealed.

If successful, the plebiscite would transform Turkey from a parliamentary political system to a presidential one.

Critics have suggested it will concentrate power almost exclusively in the president's clutches, without adequate checks and balances and little codified protection of human rights and the rule of law. Both Kurdish parties affected by the crackdown were staunchly opposed to the proposals.

"It's deeply damaging to Turkey's democracy that the government is locking up the leaders and MPs of an opposition party that received five million votes in the last election. The fact the curb comes during a vital national debate about the country's future is doubly disturbing. The crackdown is robbing millions in the eastern and southeastern parts of the country of their local representatives," said Hugh Williamson, Europe and Central Asia Director at Human Rights Watch (HRW).

Selahattin Demirtas and Figen Yuksekdag, co-leaders of HDP, and 11 other parliamentary representatives are in jail facing terrorism charges. Yuksekdag was stripped of her seat in February, and subsequently of her party membership after an earlier terrorism propaganda conviction was upheld.

In Turkey's southeast, the government has taken control of 82 municipalities won by the DBP and suspended their democratically elected co-mayors under suspicion of terrorism offenses, with 90 of them jailed pending trial.

Police then detained Demirtas and Yuksekdag and the deputy chair of the party's parliamentary group, Idris Baluken, on November 4, 2016, as well as six other MPs — Nursel Aydogan, Gulser Yildirim, Leyla Birlik, Selma Irmak, Ferhat Encu, and Abdullah Zeydan. They were brought before courts and sent to pretrial detention the same day. Nihat Akdogan, another MP, was detained and jailed three days later.

In the following months, four more parliamentarians were jailed — Ayhan Bilgen, party spokesman, Meral Danis Bestas, Parliamentary Constitution Commission member, Besime Konca, and Caglar Demirel. All have since been indicted on terrorism charges, while other HDP parliament members have been released on probation, with Leyla Birlik released from prison on January 4 at her first trial hearing.

HRW said the move was reminiscent of the situation in 1994, when the immunity of Democracy Party members of parliament was lifted and Leyla Zana, Orhan Dogan, Hatip Dicle, and Selim Sadak were arrested days later on terrorism charges, spending a decade in jail. They were convicted of membership of an armed group, in a trial the European Court of Human Rights ruled was unfair and that had violated their rights.

© AFP 2020 / PATRIK STOLLARZ
'Not All Turks Are Little Erdogans': EU Commission Hits Back at Ankara

Moreover, a September 1 decree (no. 674) amended the Law on Municipalities to permit takeover of municipalities suspected of supporting terrorism. Mayors in 82 of the 103 municipalities controlled by the DBP have been suspended from office on alleged terrorist offenses and the municipalities taken over by government-appointed provincial authorities. Mayors from other parties were removed in four other municipalities, but in each case other elected local representatives were allowed to take over their duties by authorities.

Thousands of other members of both pro-Kurdish parties have also been arrested, with the HDP informing Human Rights Watch that since the attempted coup, 5,471 party officials, including heads of provincial and district branches, have been detained, of which 1,482 have been sent to pretrial detention. BDP said 3,547 party officials had been placed in pretrial detention since July 2015. The arrests have undermined the ability of parties to conduct a campaign over the upcoming referendum, officials from both parties say.

The April referendum will take place in a repressive climate in which Turkey's independent media have been silenced and 148 journalists and media workers remain in jail, the majority incarcerated since the coup and not yet indicted for any crime.

A state of emergency, which the government has extended at three-month intervals ever since the aborted coup, is expected to be prolonged once again when it comes up for renewal on April 19.

'Not All Turks Are Little Erdogans': EU Commission Hits Back at Ankara

Thousands of Kurds Protest Against Erdogan in Germany