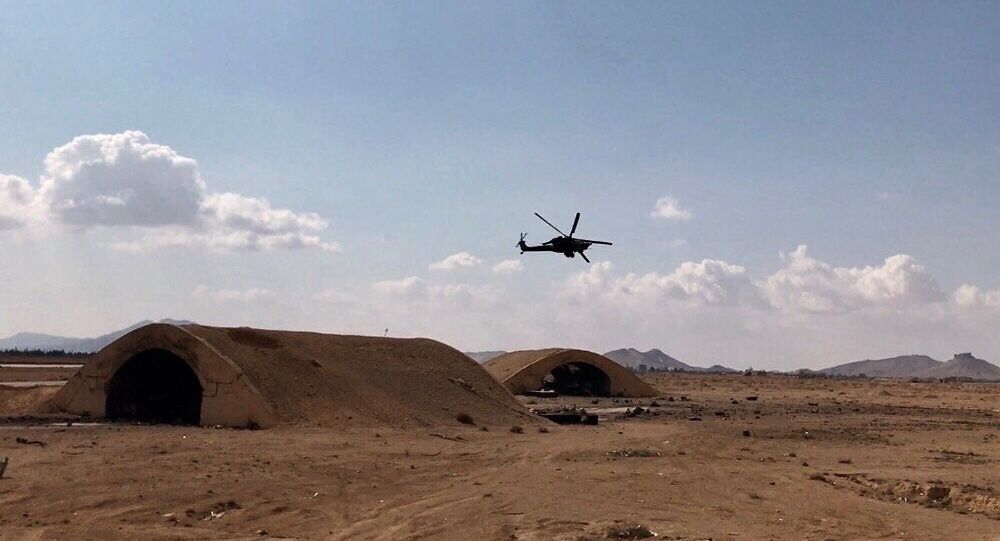 Russian attack helicopters continue to support the Syrian Army's drive to wipe out Daesh; gunships such as the Mi-28 added significantly to driving the terrorists out of the Syrian city of Palmyra in early March.

© REUTERS / Omar Sanadiki
With Peace Restored in Post-Daesh Palmyra, What’s Next for the Syrian Army?
In an interview with Sputnik, one of the Syrian Army's field commanders touted the Russian combat helicopters' contribution to the army's effort to obliterate Daesh (ISIS/ISIL) terrorists, especially in and near the ancient city of Palmyra, which was recaptured by the government forces earlier this month.

According to him, "the Syrian troops continue their offensive on terrorist positions on the outskirts of Palmyra" and that the army established full control of the key Mazar Mountain range about 15 kilometers (9.3 miles) east of Palmyra, restoring logistical warehouses.

"The Russian helicopters were of great help [to the Syrian Army's offensive]. Thanks to the copters' support, dozens of terrorists were killed," he said, adding that several of the militant Islamists' tanks and armored vehicles had been destroyed.

He also said that the Syrian Army is conducting permanent operations in the desert areas near Palmyra, including al-Suhna and Arwak.

The commander noted that Daesh was engaged in active hostilities in these areas, which is why he said "the army command has to thoroughly work out future operations."

Daesh first captured Palmyra in May 2015. In the ten months that followed, the terrorist group, notorious for destroying pre-Islamic cultural heritage sites, leveled the Temple of Bel, the Temple of Baalshamin, the Monumental Arch and several tomb towers.

The Syrian Arab Army, assisted by Russian warplanes and the allies of Damascus, took Palmyra under control on March 27, 2016, but lost it on December 11.

© REUTERS / Omar Sanadiki
After Daesh: Rebuilding of Palmyra’s Infrastructure to Take Up to Two Months
Daesh then destroyed a tetrapylon and part of a Roman theater in the ancient city, using it to carry out mass executions. Damascus-led forces retook Palmyra on March 2.

On Thursday, Syrian television reported that government troops had pushed out the last Daesh jihadists from Jabal Mazar, a key mountain range east of Palmyra.

The troops killed dozens of Daesh terrorists and seized a fleet of vehicles, according to the Syrian state news agency SANA.