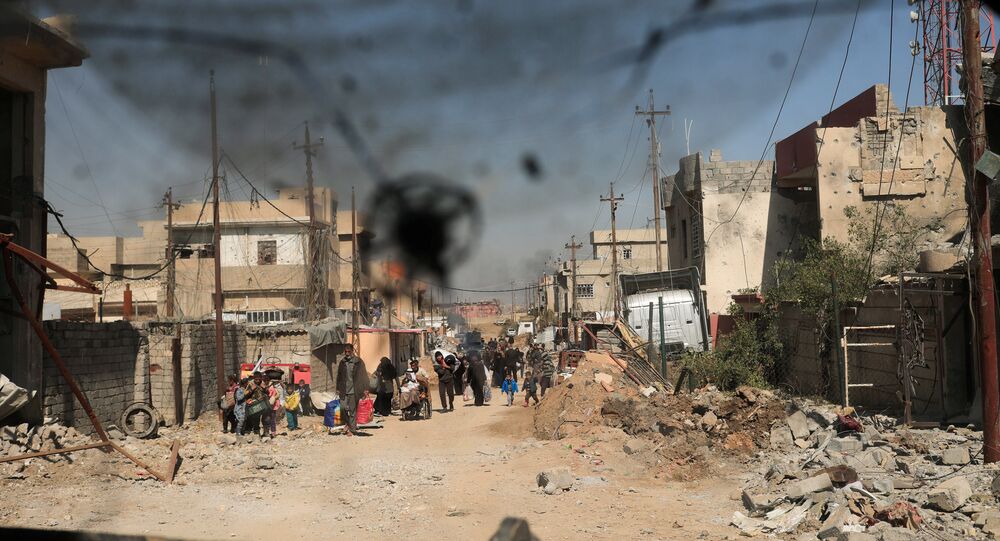 As Battle Nears End, Humanitarian Crisis in Mosul Only Grows

Iraqi forces supported by the US are closing in on Mosul and are currently entrenched less than a kilometer from city center – but their military successes have been accompanied by massive civilian casualties. Radio Sputnik’s Brian Becker talked to Alberto Garcia Watson about the situation.

© AP Photo / Sakchai Lalit
In Raqqa, Pentagon Looking to Make Up for Setbacks in Aleppo, Mosul
The retake of Mosul will effectively mark the end of Daesh in Iraq. Knowing that, Daesh has turned the city into a deathtrap and has been using local civilians as human shields. According to Watson, a journalist and former senior Middle East correspondent for HispanTV, thousands of civilians are being kept within the city by force, which leads to an extremely high percentage of civilian casualties as the battle unravels.

"The United Nations have mentioned that half of the casualties in this whole operation are civilians," Watson said.

Another reason for high civilian casualties are the bombardments of Mosul carried out by the US-led coalition, Watson said.

​The battle to retake Mosul has already taken five months. According to Watson, the Daesh militants will hold their ground until the end, because Mosul is not only the last large stronghold of the terror group in Iraq, but is also a strategically important city due to its geographical position. On top of that, the Mosul region is very rich in natural resources (oil, predominantly), so losing the city will be the final and complete defeat for the terror group in Iraq, Watson notes.

The problems that the coalition and Iraqi forces face are especially interesting in comparison to the "surprise" attack of Daesh militants back in 2014, when several thousand militants crossed the desert in broad daylight, without a single surveillance satellite picking them up, Watson notes. These several thousand militants also managed to defeat a 30,000-strong Iraqi army, which fled. Despite all the money and the effort the United States put into it, the Iraqi army provided almost no resistance.

© AFP 2021 / DELIL SOULEIMAN
Kurdish Militia Says Raqqa Offensive Will Start in Early April
According to Watson, Daesh made effective use of the element of fear, as they decapitated every single man older than 14 during their capture of the city. It was this image of terror that drove the US-trained Iraqi army to flee and leave their American weapons behind, including tanks. While several thousand people died during the capture of Mosul, the number of soldiers who ran away was degree of magnitude bigger.

The government of Iraq at that point was a "puppet government of the US," according to Watson, and it was "heavily corrupt." As such, the effectiveness of the military command was naught. It had simply been replaced by the illusion of readiness thanks to the weaponry provided by the US.

"That was an embarrassment. When the soldiers saw their commanders being the first ones to flee the area, they just did the same," Watson said.

Asked about the difference in media coverage of the battle of Aleppo in Syria and the battle of Mosul in Iraq, Watson pointed out that the agendas of the US-led coalition in the two countries were different: in Syria, the West is seeking regime change, so the media focus on reporting the tragedy of civilian suffering and demonizing Assad and Russia. In Iraq, there is no regime change aim, so more than 100,000 displaced people do not get media much coverage in Western countries.