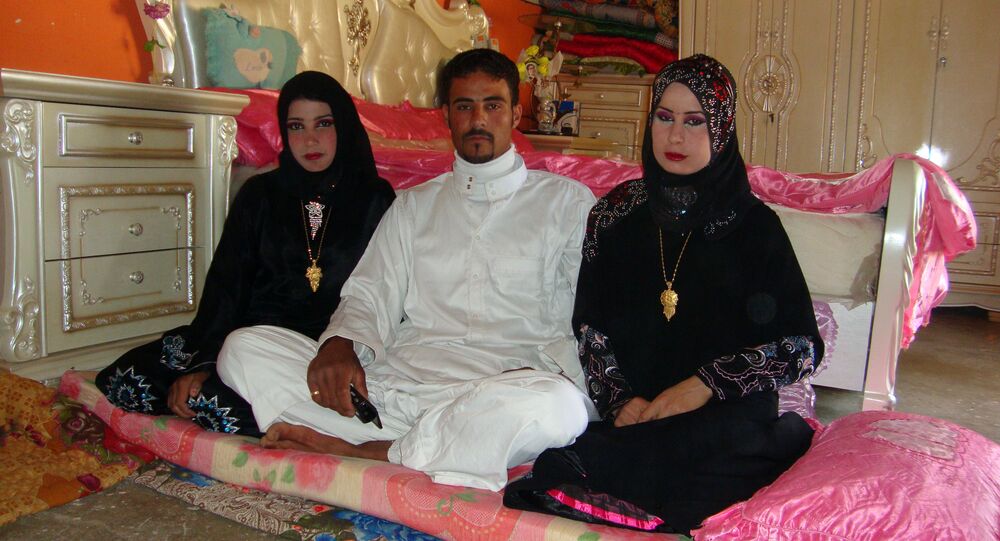 An Iraqi MP has proposed reducing the number of widows in the country by providing financial incentives for polygamous marriages.

© AFP 2020 / ARIS MESSINIS
Why Iraqi Authorities Risk Pushing Youngsters Into Daesh's Embrace
Jamila al Abidi, a member of the Iraqi parliament, has proposed to adopt a new law that would allow men to take more than one wife. Furthermore, the new law would institute monetary rewards for men willing to enter such polygamous marriage.

It should be noted that there are currently about 1.5 million widows and single divorced women living in Iraq.

This initiative sparked heated debates on social networks as society became polarized by the issue.

Human rights activist Bushra al Abidi told Sputnik that there’s no need to adopt any additional laws as polygamous marriages are allowed by the Iraqi constitution: a man can take a second wife if he can afford to support her and if his first wife consents to this marriage.

She also pointed out that the issue of monetary reward makes this entire proposal look like slave trade, and that a woman would have to be in a truly dire situation to consent to such marriage as it would degrade her dignity. The government, al Abidi argued, should address the origins of this problem and instead help women to earn a living by themselves rather than have them resort to such marriages.

Also, according to al Abidi there are currently more boys than girls being born in Iraq, and that if adopted, this law may instead cause the number of single men to rapidly increase, thus creating another social disparity.

All in all, according to her, this law was purely an election campaigning move and will never be adopted.

Meanwhile, Wahda al Jumeili, another Iraqi MP, remarked that such laws are inappropriate considering the unstable situation in the country, and that the government should focus its efforts on drafting a development strategy for Iraq which would be implemented after the victory over Daesh (ISIL/ISIS).

Abla Ibrahim, former head of the Children and Family Department at the Arab University, said that such initiatives are often considered during lengthy wars of attrition, adding that similar proposals were voiced in Europe during World War II.

Also, a marriage cannot be founded only on a women’s biological needs and monetary rewards for men, women’s rights activist Mana Azzat declared. She told Sputnik that a woman can be successful without being married, and today’s world offers her ample opportunities to do so.