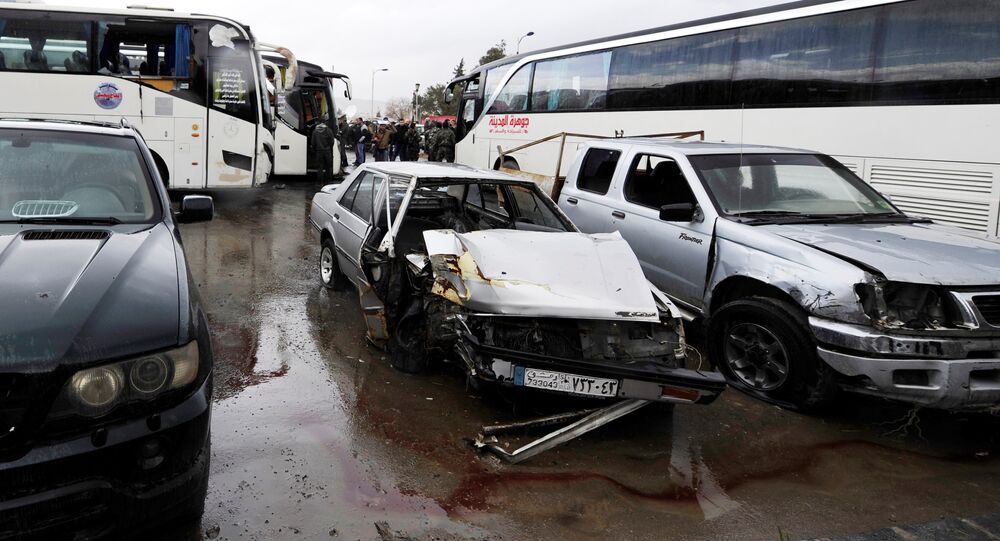 The behavior of Moscow's Western partners regarding the situation in Syria raises eyebrows, according to the Russian Foreign Ministry's spokeswoman.

"Our Western partners in the UN Security Council, allegedly seeking to fight terrorism, as they regularly claim, act in a way that is beyond logic and common sense. They are evading, under various pretexts, condemning terrorist attacks in Syria," Zakharova said at a briefing.

She stressed that such behavior was reflecting the position of West toward Syria and its people.

"Moscow is disappointed with the position of its western partners in the UN Security Council. The refusal to condemn the bloody terrorist attacks in Damascus in March, hushing up of these events, as well as of the facts of ISIL [Islamic State, banned in Russia] terrorists using chemical weapons in Iraq and Syria evidences the unwillingness to take effective steps to curb this terrorist threat which remains extremely high," Zakharova said.

Moscow is worried that the West does not listen to Russia's calls to investigate cases of chemical terrorism in Syria and Iraq.

"We are talking about the growing threat of chemical terrorism and just the urgent need for an adequate response from the world community. But Western colleagues keep silent… about the severity of the problem and ignore our calls.  How many more chemical terrorist attacks must be committed so that they finally demonstrate in practice their readiness to counteract these challenges?" Zakharova said.

She added that Moscow does not doubt that Daesh and al-Nusra Front terrorists have poisonous substances like chlorine, mustard gas and sarin.

© AFP 2020 / JM LOPEZ
Russian MoD Slams HRW's 'Amateurish' Allegations Syrian Army Used Chemical Weapons
In late October-early November 2016, a number of chemical weapon attacks were conducted in Syria's Aleppo by militants, which led to the death of dozens of Syrian servicemen and civilians. The Syrian government urged the Organisation for the Prohibition of Chemical Weapons (OPCW) to conduct an investigation, while the Russian Defense Ministry handed the results of the chemical use probe to Syria’s national regulator in charge of implementing the OPCW convention.

Meanwhile, a number of Western countries, including the United Kingdom, France, and the United States, have blamed the Syrian government for the alleged use of chemical weapons in Syria. However, all reports made on alleged chemical weapon use by Damascus have been made based on data obtained from in-person interviews with witnesses.

On October 27, 2016, the OPCW-UN Joint Investigative Mechanism (JIM) expert panel released a report claiming that the Syrian government had used chemical weapons at least three times in the country in 2014-2015. An earlier report said Daesh was also responsible for several attacks.

© AFP 2020 / LOUAI BESHARA
Assad: West 'Demonizes' Damascus Through Chemical Weapons Use Allegations
Syrian President Bashar Assad has repeatedly denied all accusations, putting the blame for chemical weapon use on terrorist groups, while the Russian authorities have called on the necessity to double-check all such kinds of reports, stressing that conclusions cannot be simply made based on interviews of several local residents.