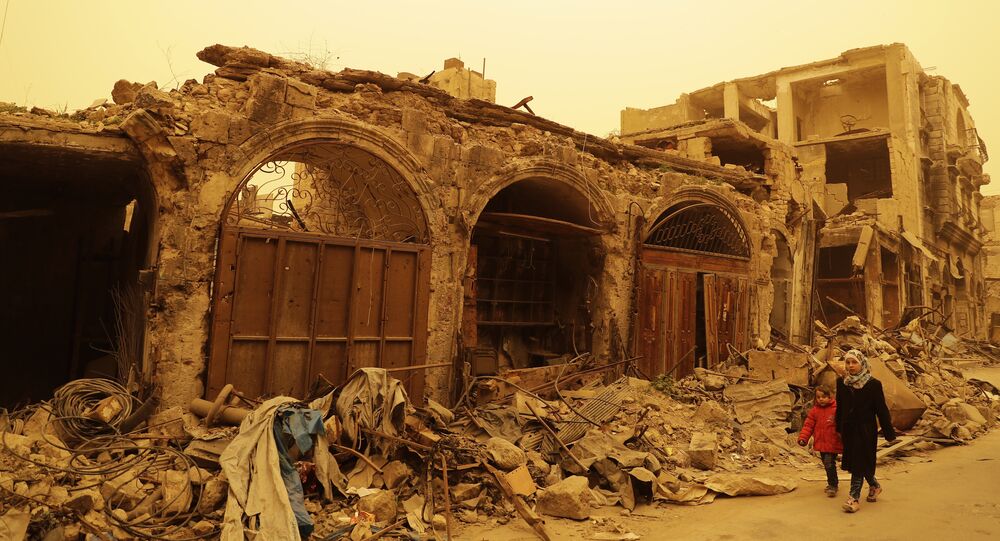 Commenting on Syrian President Assad's recent invitation to China to take part in reconstruction work in every sector of Syria's economy when the country starts a comprehensive rebuilding program, Chinese political analyst Wang Yiwei explained to Sputnik China why Beijing is interested in the reconstruction of the war-torn country.

© REUTERS / Omar Sanadiki
Assad Opens Doors for China to Restore Syria 'In Every Sector With No Exception'
China can take part in reconstruction work in every sector of Syria's economy when the country starts a comprehensive rebuilding program after its six-year conflict ends, Syrian President Bashar Assad said on Saturday in his interview with Hong Kong Phoenix TV Channel.

Wang Yiwei, a Professor in the School of International Studies at Renmin University of China, told Sputnik China that Beijing is interested in restoring the infrastructure of Syria for the purpose of its Silk Road Economic Belt project.

"Syrian projects are undoubtedly of great interests to investors and the post-war reconstruction of the country will bring many profitable deals to contractors," he told Sputnik.

China, he said, has the ability to rebuild the country, and recalled that the historic Silk Road trade route actually ran through Damascus.

When the war in the country begins to wane, there will be the need for large-scale reconstruction and also the construction of new infrastructure, which will bring investments into other spheres.

Syria, he said, is a major transport link with other countries of the Middle East and an important center of culture. Hence it might be very attractive for Chinese investment.

© Sputnik / Michael Alaeddin
China Ready to Cooperate With Syria in Anti-Terror Fight – Foreign Ministry
In his interview, the Syrian President also talked about cooperation between the Syrian and Chinese intelligence services in the fight against Uyghur terrorists who enter Syria from Turkey in order to join local terrorist groups.

Li Shaoxian, Dean of the Institute of Arab studies at China's Ningxia University told Sputnik that cooperation with the Syrian government will enable China to fight against terrorism on its own territory.

"There is nothing extraordinary in President Assad's words. It is not the first time he has talked about this. Syria has been trying to set up close relations with various countries for a long time. However many western states do not want to cooperate with him, which is why Damascus is looking for friendly support from Russia and China," he told Sputnik.

The Syrian government, he said, is playing an important role in the fight against extremist forces, and this fact is recognized by the international community.

The expert note that the Syrian leader has already spoken about cooperation with China at his meeting with the delegation from the European Parliament. Two years ago, the expert said, it was hard to imagine that such a delegation could visit Syria and meet with Bashar Assad.

© REUTERS / Omar Sanadiki
China to Provide Syria With $16Mln Worth of Humanitarian Aid
China, in its turn, is also in need of anti-terrorist cooperation with Syria. Many experts are now talking about Uyghur terrorists who come to Syria through Turkey to join Daesh and the Nusra Front. The joint cooperation between the two countries will help to eliminate this movement on China's territory.

The international community, he said, is interested in the fight against terrorism. Taking into consideration the threat to its national security coming from the Eastern Turkestan extremist group, China has a firm intention to cooperate with all parties, including Russia. However the degree and the depth of this cooperation depends on each particular country, the expert concluded.