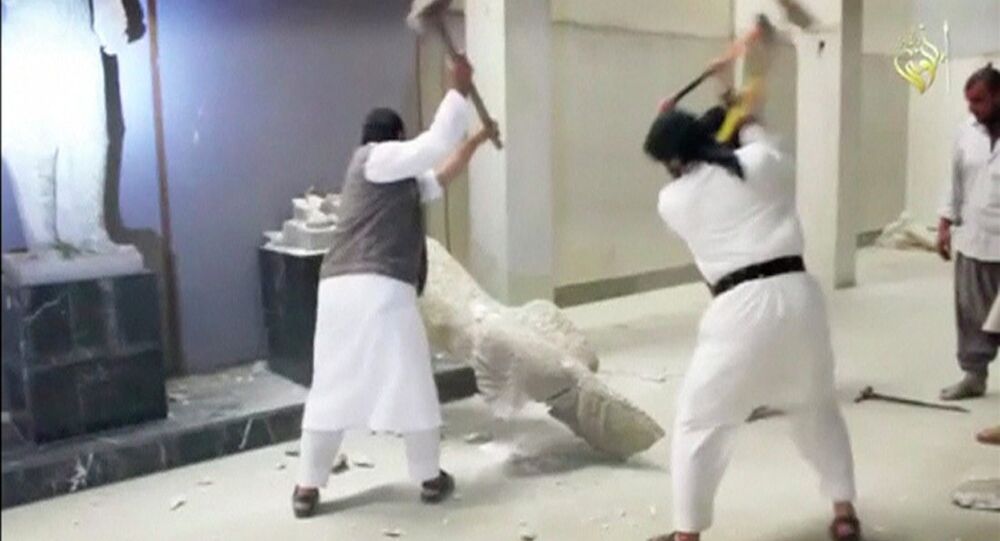 According to CNN, experts examined the March 2015 videos purportedly showing the militants destroying artifacts, and ultimately concluded that some of the pieces and statues were replicas made of gypsum, and that the real artifacts were smuggled out of Iraq and sold.

One the ancient artifacts supposedly destroyed was a statue of Assyrian winged bull called Lamassu, which met it’s end with a sledgehammer in Nimrud. The figure was a prominent symbol of the Assyrian Empire dating back to the seventh century, B.C.E.

The fundamentalist militants considered the relics an affront to their version of Islam, and against the background of religious music one man is heard saying, "O Muslims, these statues behind me are idols of people from previous centuries who worshiped them instead of God almighty. If God has ordered their destruction, they become worthless to us, even if they are worth billions of dollars."

The CNN report also suggested that jihadists may have sold other pieces stored in the warehouses of Mosul’s antiquities museum. Another video released later showed a Nimrud archaeological site being demolished with explosives and bulldozers.

The videos were released a year after Daesh took control of Mosul, as part of a systematic effort to destroy important Iraqi cultural markers, including temples, churches, ancient palaces, and even mosques that the extremists claimed venerated saints, a practice considered heretical to their brand of monotheism.

Archaeologist and former Mosul museum curator Layla Salih noted, "These are the remains of a lamassu and the lions of Nimrud…"They were priceless," and "they were in perfect condition."

The second-largest antiquities facility in Iraq, Mosul’s museum was built in the 1970s and at one time housed not only Mesopotamian artifacts but also rare pre-Islamic and Islamic texts.

Mosul native and federal police Major Muhammad al-Jabouri lamented the destruction, saying "Mosul is the heart of Iraqi civilization…When I heard how Daesh destroyed this place," he said, with his eyes filled with tears. “Death would have been a greater mercy for me."