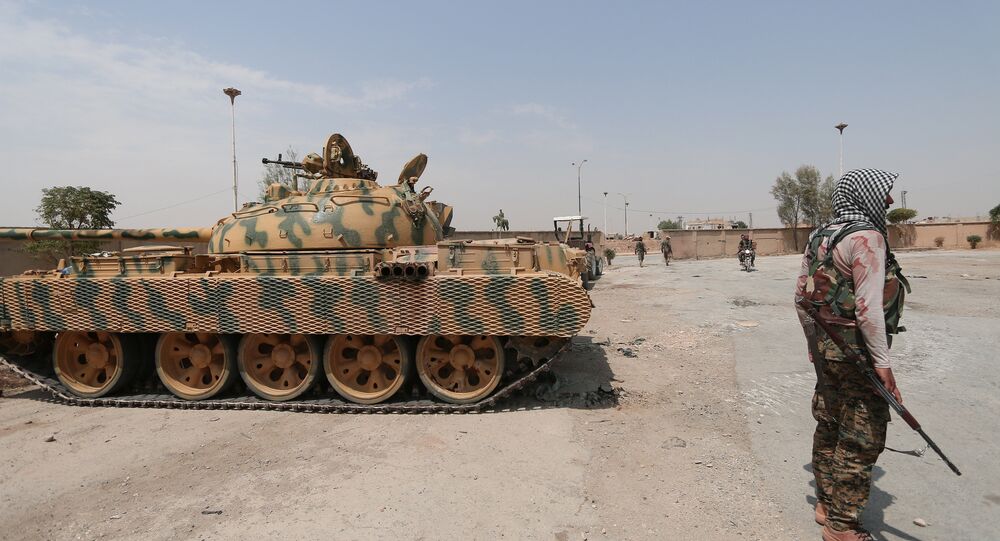 The Manbij Military Council has handed control of several areas west of the city of Manbij to the Syrian Army, as part of a Moscow-brokered deal to create a buffer zone between Kurds and the Turkish army. Geopolitics analyst Gevorg Mirzayan explains why the deal is a win-win-win-win-win for Damascus, Moscow, Ankara, Washington and the Kurds.

Late last week, a senior official from the Manbij Military Council, a Syrian Democratic Forces-based coalition led by Syrian Kurds, told Sputnik that control of six villages to the west of the Syrian city of Manbij had been transferred to the Syrian Army. The move, the official said, is meant to save the city from possible attack by Turkish troops and units of the Free Syrian Army. The same day, Lt. Gen. Sergei Rudskoy, chief of the Russian General Staff's Main Operational Directorate, confirmed that the SDF had reached agreement with Damascus in a deal brokered by Moscow.

Before deal was announced, Turkish authorities had repeatedly hinted that Manbij would be the next target of their Syrian campaign. With the signing of the Kurdish-Syrian deal, experts have said that Ankara will be forced to abandon plans to grab onto more Kurdish-administered territories.

But there's another angle. In a recent analysis published by RIA Novosti, political scientist Gevorg Mirzayan explained that the Manbij land swap deal not only saves the Kurds from Turkish attack, but saves Ankara from possible infighting (political or literal) with Washington. The real question, the analyst wrote, has more do with Moscow's motivations for playing the role of peacemaker.

© AFP 2021 / George OURFALIAN
Syrian Army Creates Buffer Zone Between Kurds and Turkish Military
In fact, Mirzayan noted, saving other powers from disastrous decisions in Syria has become somewhat of a tradition for Moscow. "The Kremlin did it a few years ago, when it saved Obama as he was being pushed into a suicidal war against Assad over a provocation involving chemical weapons. Russia found a decision worthy of Solomon, via the removal of these weapons of mass destruction from Syria." Now, the analyst noted, it seems it's once again time for Moscow to prevent Ankara from waging an all-out war against the Syrian Kurds, which would inevitably drag in the Americans.

The logic here is simple, Mirzayan explained. When Turkish forces entered Syria last year, they did so not so much to fight Daesh, as to prevent the unification of Kurdish enclaves in northern Syria and the creation of a grand Kurdish autonomy stretching along Turkey's southern border. "That is why, after capturing the Syrian city of al-Bab from Daesh, Ankara announced that the new goal of Operation Euphrates Shield would be to 'free Manbij from Kurdish fighters'. The minimum objective for Ankara was to push the Kurds back to the eastern bank of the Euphrates."

However, Washington's position has complicated Ankara's plans. The US, the analyst noted, has its own plans for Syria, in which a viable and strong Kurdish faction is set to play an important role.

"And it's not even so much that the US plans to use the Kurds to temper Turkish ambitions in the region into the future," the expert noted. "Washington needs the Kurds here and now. Like Barack Obama, Donald Trump wants to gain the laurels of victory over Daesh – to take this title from the Russians, the Syrians and the Iranians (who have made the biggest contribution to defeating the group). This task is quite feasible, because the winner is the one who takes the capital. The Americans just need to use their allies and their special forces troops to take Daesh's two capitals – Mosul in Iraq and Raqqa in Syria."

© REUTERS / Turkish Military
US Joint Chiefs Chair Meets Russian, Turkish Counterparts on Syrian Issue - DoD
Mosul, the first objective, has almost been reached, Mirzayan noted, with the terrorists defeat in the western quarters of the city now only a matter of time. In order to reach the second objective, Washington will need the Kurds' help. After all, unlike the Syrian Army, which faces a wall of Daesh to fight through before reaching Raqqa, the Kurds are already positioned north of the city, in places even near the city's outskirts.

Furthermore, Kurdish forces have already reached the limits of expansion both to the east (to Iraq's borders), and the west (where they meet with Damascus-controlled territories). The only way forward is south, the analyst noted, "and Washington intends to join in." Already, the US is funneling assistance to the Kurds in their fight against Daesh, along with direct military support from US special forces.

"Naturally, a Kurdish attack on Raqqa will be made possible only if several conditions are met, most important among which is that they are not distracted by other conflicts. Hence the reason why US military officials have clearly stated that all fighting between the Syrian Kurds and the Turks, as well as from pro-Turkish formations from Iraqi Kurdistan…must be stopped immediately."

© AFP 2021 / Ayham al-Mohammad
Pentagon Deploys Additional Troops to Manbij to 'Reassure and Deter'
On Monday, Pentagon spokesman Jeff Davis told reporters that the forces of the common Daesh enemy lie south of Manbij. In fact, Mirzayan noted, "the spokesman generally didn't hide the fact that US troops have been deployed to the area to publically 'show the flag', and thus prevent the Turks from attacking, which would distract the Kurds from implementing the US plan."

This situation put Turkish President Recep Tayyip Erdogan in an unpleasant situation, the analyst wrote. "An offensive against the Kurds is impossible without the risk of causing the deaths of two or three US special forces soldiers." Meanwhile, publically "abandoning the operation to 'liberate' Manbij from the Kurds is also impossible without losing face, something absolutely unacceptable for a politician [like Erdogan] with Sultanic ambitions."

And Washington also faced this unpleasant prospect, Mirzayan stressed. "If Erdogan were to take the risk and start the operation, the US would have to choose between a military conflict with a fellow member NATO and a disgraceful withdrawal of its contingent from Kurdish territory."

© Sputnik / Andrey Stenin
Russia Delivers Over 8 Tonnes of Aid to Syrian Civilians in 24 Hours
That's where Russia stepped in. "Moscow," the analyst recalled, "proposed to simply separate the Turks and the Kurds from one another via the Syrian Army, to whose control the Kurds must transfer part of the territory on the western bank of the Euphrates River."

On Friday, Lt. Gen. Rudskoy confirmed that "in accordance with the agreements reached with the participation of the Russian air group command in Syria, Syrian armed forces units have been deployed to territory held by the Kurdish self-defense forces."

"In the end," Mirzayan noted that "the Turks are pleased – they have achieved their goal of reducing Kurdish territories without a conflict with the Americans. Prime Minister Binali Yildrim has stated that Manbij under Damascus' control would suit Turkey better than it would under Kurdish control."

"The Kurds too are also satisfied, generally speaking," the expert added. "Yes, they have given up hard-won territories, but 'the decision was made to protect the civilian population of Manbij and the surrounding areas from Turkish aggression and occupation', as stated in the Manbij Military Council's statement. And everyone understands perfectly well that Turkish occupation may not have ended with Manbij, with Turkish troops [possibly] advancing to the other side of the Euphrates" as well.

"Finally, the Americans are also happy," Mirzayan noted. "Now it's easier for them to find a modus vivendi between both of their allies – the Turks and the Kurds."

Of course, Damascus and Moscow have every reason to be satisfied too, the analyst wrote, with Syria gaining back control over large areas of their country, all "without losing a single soldier."

© AFP 2021 / George OURFALIAN
Syrian Army Takes Control Over Strategic Water Tower Supplying Aleppo
Ultimately, of course, the Kurdish question, and specifically the Kurdish territories' status in postwar Syria, will remain once Daesh is decisively defeated. Nevertheless, Moscow and Damascus have decided against any Machiavellian maneuvers to see Turkish and US-backed Kurdish forces duke it out with one another for advantage. According to Mirzayan, "it is no accident that Russia insists on the Kurds' participation in the Syrian peace talks. Only time will tell just how correct the latest decision to save Moscow's partners has been."
...
Reddit
Google+
Blogger
Pinterest
StumbleUpon
Telegram
WhatsApp
748

Pentagon Deploys Additional Troops to Manbij to 'Reassure and Deter'