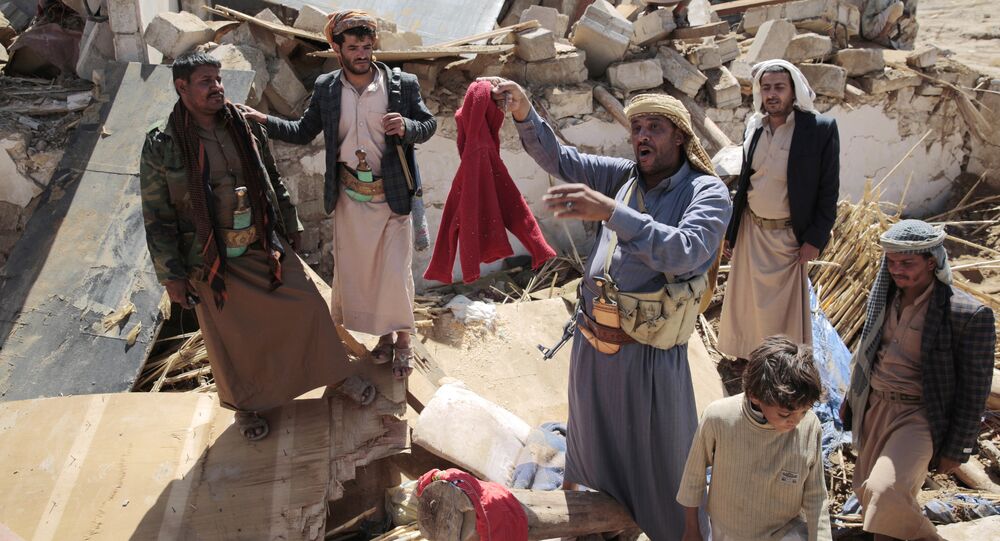 The US is carrying out a major series of airstrikes in Yemen, allegedly in aid of destroying one of al-Qaeda's most prominent divisions - but a regional expert has said the action is aggravating the already dire humanitarian crisis in the country, and is mainly hitting civilians, turning the country into "one big Auschwitz."

Among the dead was former Guantanamo Bay detainee Yasir al-Silmi, who died alongside Usayd al-Adnani, emir with al-Qaeda in the Arabian Peninsula (AQAP) within the Abyan governorate, the Pentagon announced. Yemeni al-Silmi spent several months in extrajudicial detainment at the US naval base in Cuba after being apprehended in Pakistan, but was repatriated to his homeland in 2009.

© Flickr / U.S. Department of Defense
US Carries Out Over 30 Strikes in Yemen Within Two Days

The strikes follow a January raid in which one US commando, more than a dozen militants and perhaps dozens of civilians, among them women and children, lost their lives. The US considers AQAP to be the most dangerous of al-Qaeda's various splinter organizations — it has not launched any successful attacks in the West, but is responsible for the deadliest terror strike in Yemeni history, killing 120 military personnel with suicide bombs in 2012.

The chaos created by the civil war in Yemen, which pits rebel Houthi Shiites against a Sunni military coalition led by Saudi Arabia, has allowed AQAP to seize huge swathes of Yemeni territory. In 2016, it captured the strategically valuable port city of Mukalla, seizing around US$120 million from the city's banks in the process.

US Special Forces subsequently ousted the group from Mukalla later that year, but it remains the third most powerful third party in the conflict.

"AQAP have taken advantage of ungoverned spaces in Yemen to plot, direct and inspire terror attacks against the United States and our allies. We will continue to target AQAP militants and facilities to disrupt the organization's plot and protect American lives," Davis added.

However, many question marks hover over whether the US is truly conducting its campaign to fight terrorism in the region.

"Reprieve has a wealth of information on America's 'secret wars,' specifically referring to the drone attacks. It's said they're intended to kill terror suspects, but in the case of Yemen many civilians have been killed — these people are not terrorists. If the US is serious about fighting terrorism, they must be honest about how they're going about it. They must address the Saudi rulers and ask why they are deliberately targeting civilians. Their war crimes are being conducted with American blessing," Kim Sharif, Director of Human Rights for Yemen, told Sputnik.

Ms. Sharif said the US drone campaign was "completely ridiculous," given coalition forces are fighting alongside Daesh.

"It's difficult to tell exactly who and what they're hitting at the moment. There have been several raids in recent days, allegedly against AQAP and Daesh fighters, but there seems to be illogic afoot here. When the Russians went into Syria, several flights were sighted in Aden airport bringing Daesh fleeing Syria into Yemen. Are they importing terrorists from other places into Yemen, giving themselves the excuse to intervene in the civil war on the government's side? This is very worrying indeed," she said.

Ms. Sharif added that the bombing campaign was worsening the dire humanitarian crisis in the country. It has prompted many Yemenis to flee to the North, a region already burdened by three million extra displaced citizens — around 16 million people face famine as a result of the "ongoing, illegal" war.

"The UN Security Council has failed to uphold its own laws and respond to the humanitarian needs of these people. Children are being killed in their schools with cluster bombs. Yemen has become one big Auschwitz due to the meddling of major powers," she concluded.

As of March 2017, over 10,000 have died in the conflict, most of whom are civilians. US-made bombs have repeatedly been used to kill civilians in illegal airstrikes against Yemeni citizens — such as the attack on a Houthi funeral last year, which killed at least 140.

In all, over 40 targets were hit in the week following March 1, more than in any previous year.