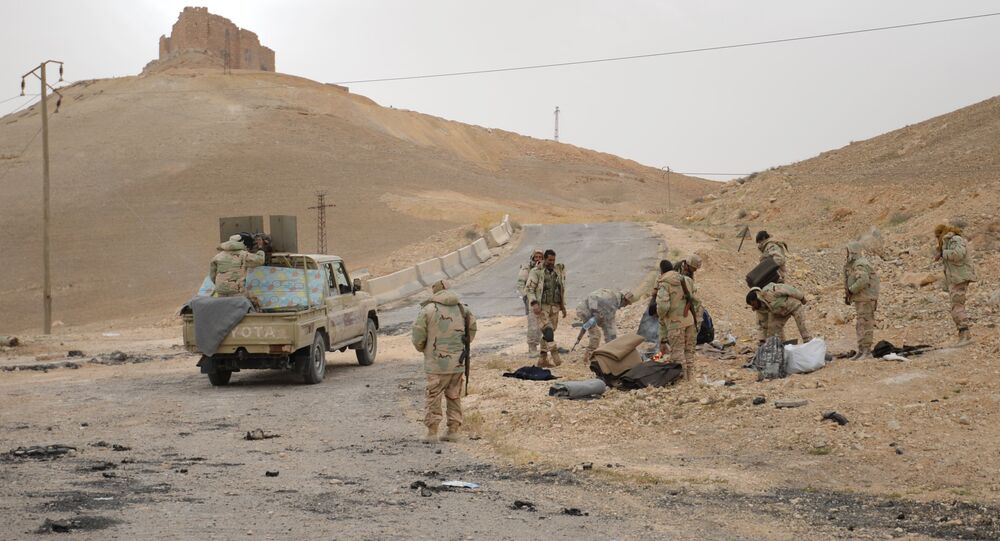 A Russian contract soldier died near Palmyra on March 2, the Russian Defense Ministry confirmed on Monday.

The Russian Defense Ministry said that the soldier was killed during a terrorist offensive on Syrian army's positions, where Russian military advisers were present.

"Artem Gorbunov died on March 2 near Palmyra when repelling Daesh terrorists' attempts to advance on the positions of Syrian [government] troops, where Russian military advisers were present."

The soldier was posthumously awarded. Earlier in the day, Gorbunov was buried at a cemetery in the Russian city of Nizhny Novgorod.

According to the Defense Ministry, 28 Russian servicemen have been killed in Syria since the beginning of the anti-terrorist operation.

© AP Photo / Hassan Ammar
Russian Heroes Killed During Military Operation Against Daesh in Syria
On March 2, the Syrian army backed by the Russian military aircraft operating in Syria regained control over Palmyra. When commenting on the military operation, the Russian General Staff said that Russian Special Forces and aviation played a crucial role in Palmyra's liberation.

On March 3 it became known that Russian Major General Petr Milyukhin was injured during the fighting in Palmyra. Sputnik reported that he was transported to a Moscow hospital. Further details remain unknown.

Daesh first captured Palmyra in May 2015. In the ten months that followed, the brutal group, notorious for destroying pre-Islamic cultural heritage sites, leveled the Temple of Bel, the Temple of Baalshamin, the Monumental Arch and several tomb towers. Some of the priceless artifacts on display at a local museum were smashed or defaced.

© AFP 2020 / STR
Russian General Reveals Details of Palmyra's Liberation
The Syrian Arab Army, assisted by Russian warplanes and its allies took Palmyra under control on March 27, 2016, but lost it on December 11. Daesh then destroyed a tetrapylon and part of a Roman theater in the ancient city, using it to carry out mass executions.

When Palmyra was freed in March 2016, Russian soldier Alexander Prokhorenko was killed as he was carrying out a reconnaissance mission to provide intelligence for the Russian Air Force to attack Daesh targets near Palmyra. The officer ordered his comrades to carry out an air strike on his position after he was discovered and surrounded by Daesh terrorists, a story which led to the international press naming him the "Russian Rambo" for his act of heroism. Alexander, who was 25 years old, was married. Before he left for Syria he found out that his wife was expecting their first child.

Palmyra: Before and After