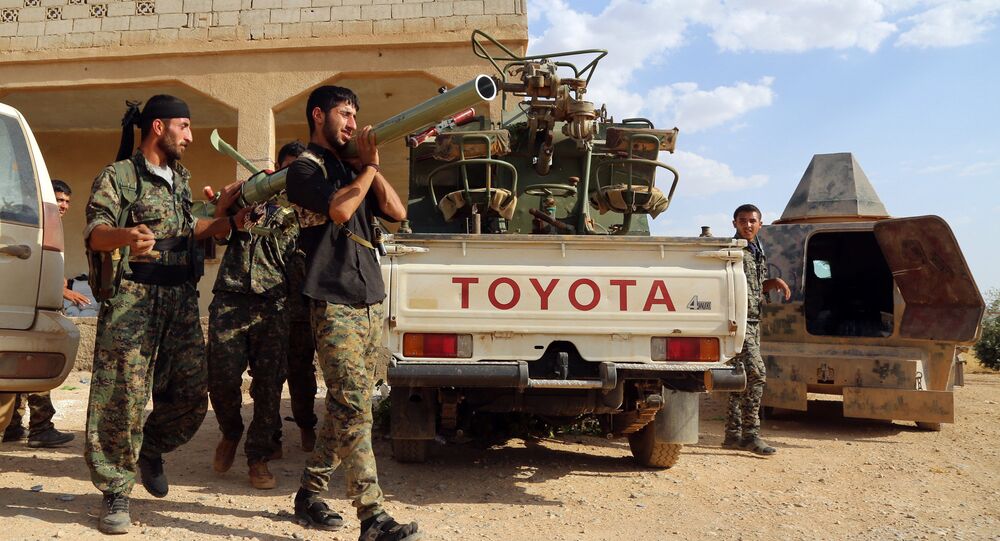 Control over six villages to the west of the Syrian city of Manbij has been turned over to the Syrian Army, sources in the Manbij Military Council (MMC) said.

© Photo : ARAB 24
US-Led Coalition Carries Out 2 Strikes Against Daesh Near Manbij
According to the sources, control over the villages was handed over to Syrian forces as a result of an agreement with Russia. The move aims to prevent a possible attack by Turkish troops and units of the Free Syrian Army (FSA).

On condition of anonymity, a senior MMC official told Sputnik Turkey that six villages were placed under control of the Syrian Army and that the United States delivered a large shipment of weapons to northern Manbij.

"These six villages were liberated from Daesh during the Al-Bab operation. They are located 22 kilometers to the west from Manbij. Under an agreement with Russia they are now under control of the Syrian Army," the official said.

The Manbij Military Council is one the four military councils established by the Kurdish-dominated Syrian Democratic Forces (SDF) in order to facilitate military operations in Syria.

The source added that the council did not sign any formal agreement with the Syrian forces because all the necessary procedures had already been implemented during talks with Russia.

© AFP 2021 / George OURFALIAN
Syrian Army Creates Buffer Zone Between Kurds and Turkish Military
"In addition, US troops and armored vehicles were deployed in northern Manbij. Yesterday, the US made a large shipment of weapons to the regions. Meanwhile, fierce clashes are still underway in the area," according to the official.

Moreover, last week it was reported that the US military was "taking all necessary measures" to defend Manbij from a possible assault by Turkish troops.

"In particular, he said, US servicemen have set up a military base in the city and are sending an additional contingent there. They are also deploying heavy weaponry and armored vehicles to the area," a source in the SDF told Sputnik Turkey.

Alongside setting up the military base in Manbij, the US was reportedly deploying servicemen and armaments to the northern and western parts of the city.

© REUTERS / Rodi Said
Turkey Not Opposing Establishment of Syrian Army's Control Over Manbij – PM
Meanwhile, the command of the Manbij Military Council issued a statement detailing the agreements with Russia.

According to the statement, the agreement refers to a demarcation line between Kurdish and coalition forces in Manbij, and forces involved in the Euphrates Shield Operation, including the Turkish military and the FSA.

"We will not let other forces enter the region. Manbij was liberated by Kurds and coalition forces. The same forces will continue to protect the city and its population," the statement read.

'Chaos in the Region': Fighting in Syria's Manbij Persists Amid FSA Attacks