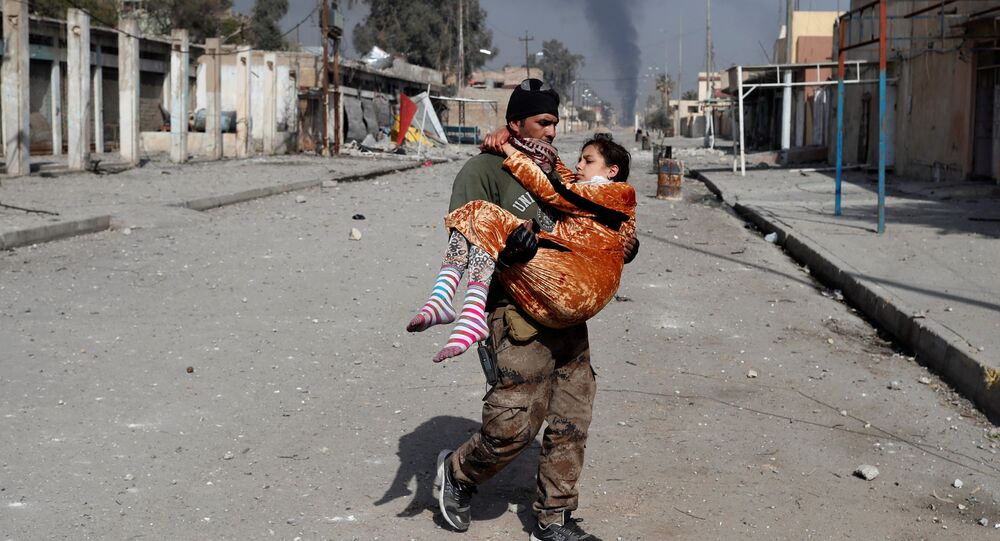 Twelve people, among them women and children, are being treated for suspected exposure to chemical weapons in Mosul. If a chemical weapon attack is confirmed, it would be another war crime committed by Daesh in their desperate defense of the city, the UN says.

The World Health Organization said in a statement March 4 that it had launched an emergency response plan to treat men, women and children "who may exposed to the highly toxic chemical."

According to the WHO, since the beginning of the month they have seen 12 patients with respiratory symptoms and blistering, four of whom "are showing severe signs associated with exposure to a blister agent." The patients are being treated in a hospital in Erbil, the capital of Iraqi Kurdistan, and all are in stable condition and expected to be discharged in the next few days, according to AP.

The agency has not said what chemical agents might have been used.

The suspected attack occurred in eastern Mosul, one of the first areas of the city to be retaken by Iraqi forces in January after the Mosul offensive was launched in October. The battle to retake the western half of the city began last month; however, the eastern portion of the city remains within reach of Daesh rockets and mortars, AP notes.

UN Humanitarian Coordinator in Iraq Lise Grande called for an investigation, saying there is never justification for using chemical weapons.

"This is horrible," she said in a statement. "If the alleged use of chemical weapons is confirmed, this is a serious violation of international humanitarian law and a war crime, regardless of who the targets or the victims of the attacks are."

Nazim Hamid, whose family is being treated for possible chemical weapons exposure, told AP a mortar had hit his house while he and his family were inside.

"There was a very bad smell, it was some kind of gas," he said. "My kids were affected, some of them were burned and some of them had difficulty breathing."

UNICEF reported March 3 that 15,000 children had fled western Mosul in the past week and at least one of its camps for displaced people was near maximum capacity. The agency was scrambling to add capacity for another 100,000.

Though the threat of a humanitarian crisis triggered by the effort to finally oust Daesh from Iraq has been discussed for nearly as long as the battle itself, Iraq's Minister of Displacement and Migration today criticized the UN's response to the wave of people displaced by the campaign in western Mosul.

"Unfortunately, there is a clear shortfall in the work of these organisations," Jassem Mohammed al-Jaff said, AFP reports.

"The United Nations talks a lot but the efforts being made are little, despite the huge amount of money in their possession."

More than 50,000 people have fled western Mosul since the push to retake it began last month, according to Jaff. The International Organization for Migration finds that more than 190,000 have been displaced since the battle for the city began.

The UN has already had to cut food rations to those displaced by the fighting in Mosul after apparently not receiving promised donations.