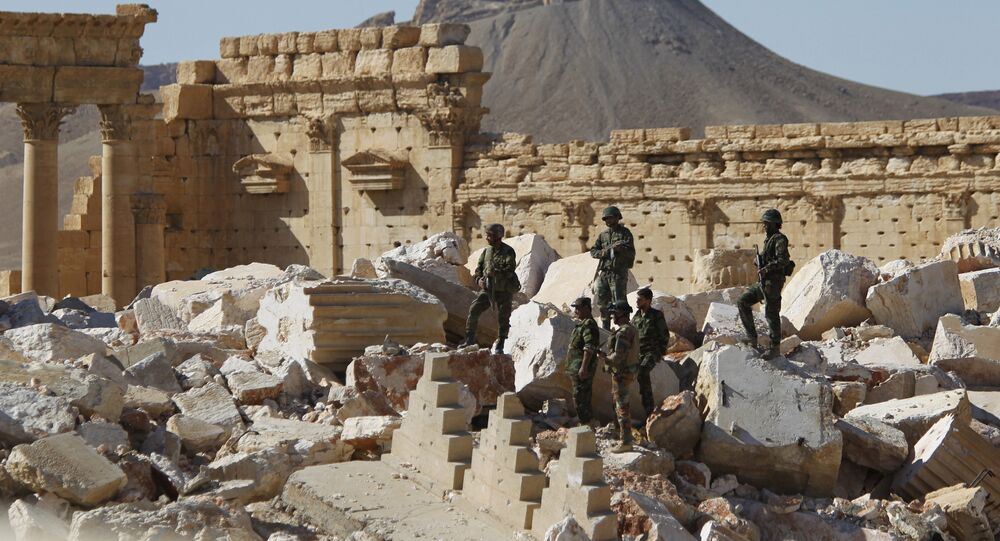 Liberation of Palmyra: What Lies Ahead for the Ancient City (VIDEO)

The ancient Syrian city of Palmyra has been liberated but there are no civilians there. On the streets of the city there is a presence of armed forces and journalists as government forces try to return the civilians back to their homes. RIA Novosti correspondent Mikhail Alaeddin visited Palmyra and spoke with the governor of Homs province.

© Sputnik / Mikhail Alayeddin
Palmyra’s World Heritage Site May Not Be as Damaged as Feared
“The state museum building located right at the entrance into the historical part of Palmyra seems more destroyed than a year ago. However, buildings on the opposite side were even less fortunate so it is possible to set up a camp there now after removing the piles of stones from the once-standing mansions,” Alaeddin said.

The Syrian military is residing in some of the houses that have not been demolished by the terrorists. In addition to their national flags, the soldiers have hung the Russian tricolor in gratitude for the assistance provided during the liberation of the city.

In December last year, residents of Palmyra had to flee their homes wearing nothing but their night suits just to escape horrible death at the hands of the terrorists.

Now although the city has been liberated, there are still much to do. Many districts and roads are still blocked by mounds of sand; there is a burning smell present in the air and broken childrens’ toys and other everyday objects are scattered all over the streets, according to Alaeddin.

“Apparently, the terrorists managed to break down and steal what little the citizens could restore, so the residents will not be returning anytime soon,” a fighter of the fifth corps of the Syrian army, who stormed the city the day before, told the correspondent.

Meeting with the governor

Once inside the city, the correspondent awaited his meeting with the governor of the Homs province, Tala Barazi. He arrived shortly afterwards, accompanied by a motorcade in a tinted SUV and stopped at the police building nearby.

The governor and the representatives of the army also paid a visit to the amphitheater in order to personally assess the scale of the latest destruction.

In an interview with Alaeddin, the governor shared the future plans of his administration for the city of Palmyra, saying that the engineering teams are now searching for and cleaning up the city from explosive devices and the municipal services will soon begin to unblock the roads and clear the streets.

© AP Photo / Militant Photo
Daesh Forces May Flee to Other Syrian Regions After Defeat in Palmyra
He added that the citizens, however, would return immediately after the Syrian army announces completion of demining of the whole city, so they will be able to return before restoration of the whole infrastructure.

The governor said that the Syrian army managed to force the terrorists some 20 kilometers away from Palmyra, in the direction of Sukhn [a city located between Palmyra and Deir ez-Zor].

“I believe the army; with the support of its allies will continue the offensive in the direction of Sukhn and Shaer [oil fields],” Barazi added.

A token of gratitude

After meeting with the governor, the correspondent together with his team was exiting the city when he was stopped at a checkpoint. A soldier came forward and taking off a wooden cross from his neck offered it to Alaeddin saying that he wanted to offer it as a present to Russia.

“This is a gift from me as I want it [the cross] to visit Russia in gratitude for the fact that you are real friends and did not leave us even during the most difficult time,” the soldier said.

On Thursday, the Syrian army, backed by the Russian aircraft operating in Syria, regained control over the ancient city of Palmyra.

Daesh terrorists first seized Palmyra in the spring of 2015, but were forced out by Syrian government troops together with the air support provided by Russian jets in March 2016. Subsequently, Daesh made multiple attempts to retake Palmyra, culminating in a major assault in early December 2016.

After Daesh: Rebuilding of Palmyra’s Infrastructure to Take Up to Two Months