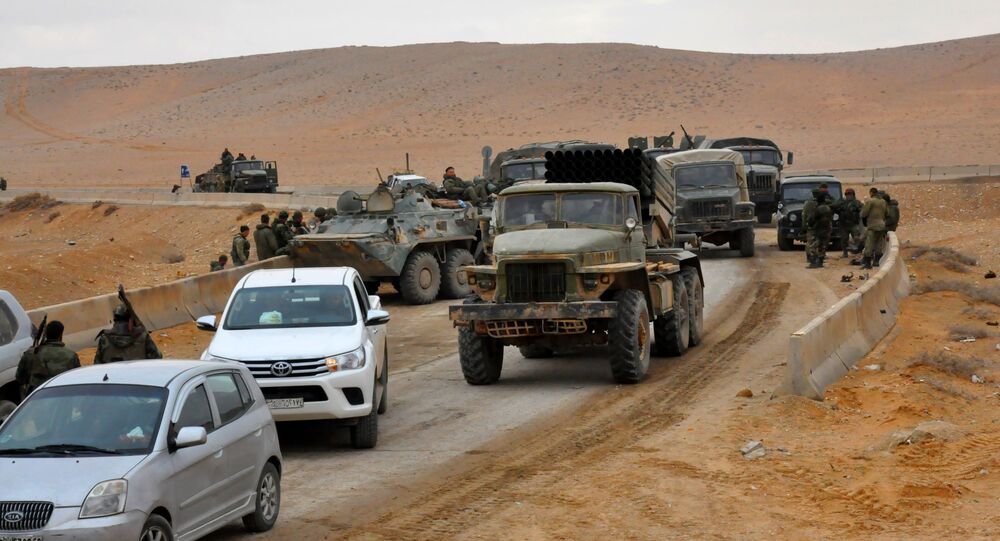 The Syrian Army and allies have pushed Daesh terrorists for over 12 miles away from recently liberated Palmyra.

PALMYRA (Sputnik) — The Syrian Army backed by allies pushed Daesh away for more than 12 miles toward Deir ez-Zor province, Talal Barazi, the governor of the Homs province, told Sputnik Friday.

"The terrorists were pushed back from the city for more than 20 kilometers in the direction of As Sukhnah [a city located between Palmyra and Deir ez-Zor]. I believe, with the support of allies, the army will keep on the offensive toward As Sukhnah," Barazi said.

© Sputnik / Maksim Blinov
Return to Civilization: First Look Into Liberated Palmyra (PHOTOS, VIDEO)
On Thursday, the Syrian government forces regained control over Palmyra with the support of the Russian aircraft operating in Syria. The operation was carried out with minimal losses among the anti-terrorist troops.

The city was occupied by Daesh (banned in Russia) in May 2015 and was under control of the terrorists until March 2016, when the Syrian army supported by Russia's Aerospace Forces liberated it. However, the jihadists later succeeded to drive out the Syrian government forces in December 2016 after a large-scale offensive.

Palmyra After Liberation From Daesh