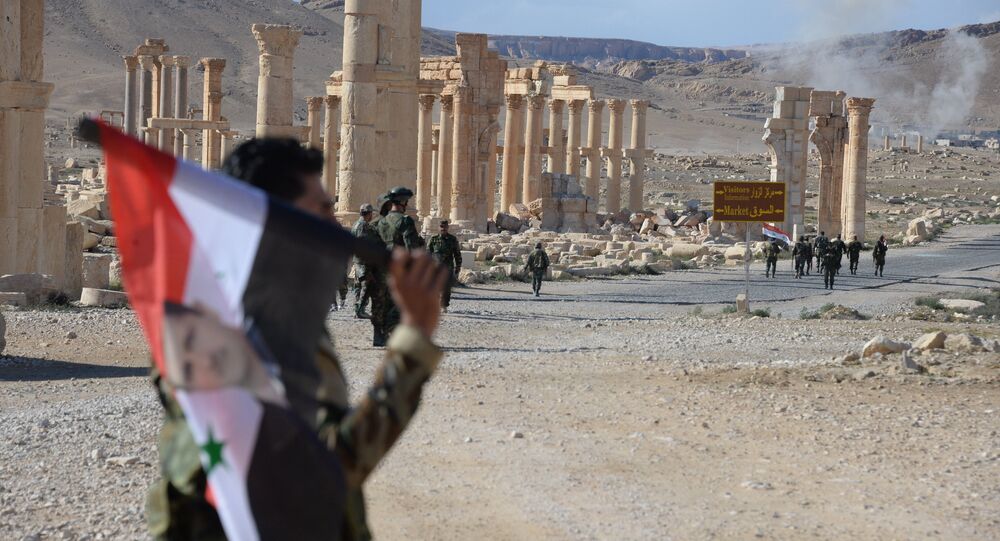 The retaking of the ancient city of Palmyra has given the Syrian government forces the opportunity to increase their offensive against Daesh, the Syrian army announced right after the end of the operation. Political and military analysts have suggested what might be coming next in the war-torn country.

© Sputnik / Maksim Blinov
Return to Civilization: First Look Into Liberated Palmyra (PHOTOS, VIDEO)
On Thursday, the Syrian Army, with the aerial support of the Russian aircraft operating in Syria, regained control over the ancient city of Palmyra.

"Control over Palmyra creates the basis for further expansion of military actions conducted by our forces against the Daesh organization," the army said in a statement obtained by Sputnik.

According to the statement, the liberation of Palmyra clearly shows that the Syrian Army and its allies are the only force capable of countering the Daesh terrorists in the region.

Commenting on the high morale of the Syrian government servicemen, Viktor Ozerov, chairman of the Russian upper house of parliament's committee for defense and security told Sputnik that the Syrian army might have heeded all its previous mistakes and won't cede the city to the terrorists once again.

"The Syrian army might have learnt a very important lesson: everything that is retaken from the terrorists should be reliably defended. All the mistakes should be heeded and there should be no Palmyra 2.0," he told Sputnik.

© AFP 2021 / STR
Full Steam Ahead! Syrian Army in Combative Mood to Kick Daesh Ass After Retaking Palmyra
Meanwhile Boris Dolgov, a senior fellow at the Moscow-based Center for Arab and Islamic Studies at the Russian Institute of Oriental Studies told Sputnik that the retaking of the ancient city might be a vital point in the further advance of the Syrian army and the liberation of the country from Daesh.

"The liberation of Palmyra provides momentum for the further advance of the Syrian army and the liberation of a number of territories after the victory in Aleppo," he told Sputnik.

He further elaborated that there are several options open for the Syrian army, and it will definitely continue its assault of areas still under the control of Daesh and al-Nusra.

The expert suggested that the army might make an offensive on the city of Raqqa or Deir ez-Zor, which is still under the blockade of the radical groups.

However Sergei Demidenko, a researcher at the School of Public Policy of the Russian Presidential Academy of National Economy and Public Administration (RANERA) suggests that the retaking of Palmyra can't be regarded as a signal for the further swift military successes of the Syrian army on other fronts even though Daesh militants are currently experiencing losses.

"The major forces of the terrorists are concentrated near Deir ez-Zor and Raqqa, the Syrian army should focus on these two cities then. Probably Raqqa might be the next target of the Syrian government forces however it is too early to talk about any retaking of this city. Even though Daesh is experiencing losses and is being defeated in Iraq as well, we can't say that this ideology has been completely defeated," he told Sputnik.

He further noted that the strategic meaning of Palmyra is greatly exaggerated. Palmyra, in fact, is not a city but rather a small village with only a very small population and generally speaking there nothing there, apart from the cultural and historic artifacts. Palmyra is just symbolic, he said.

© AFP 2021 / STRINGER
Russian Lawmaker: Recapture of Palmyra Symbolizes Syria’s Liberation From Terror
The expert also noted to Sputnik that there the current socio-cultural environment in the Middle East is favorable for the growth and further spread of Islamic extremism.

"It is practically impossible to defeat it at the moment. It might be temporarily suppressed with a military force however it is quite possible that in a short while it is going to regenerate with renewed vigor," he finally stated.