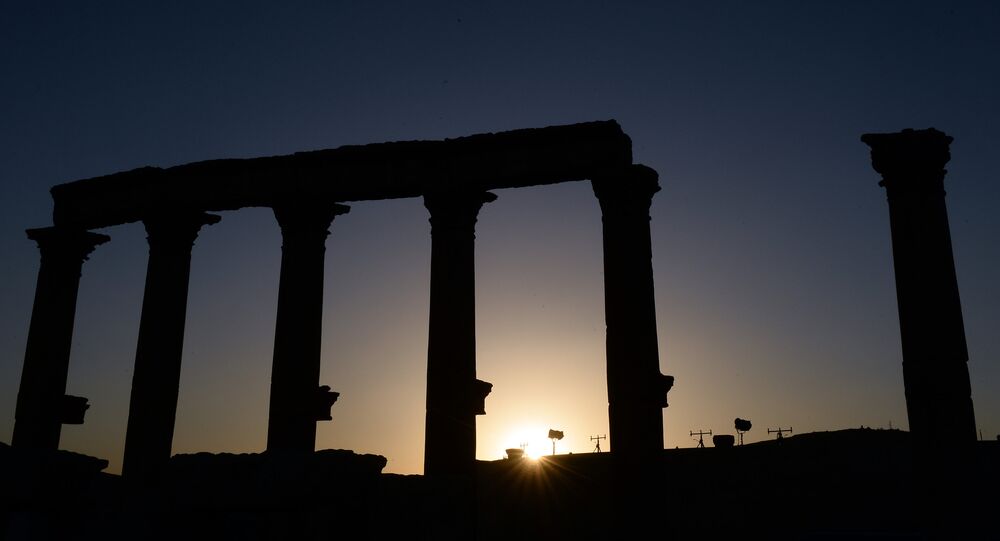 The Syrian Army has completed the liberation of the ancient city of Palmyra from Daesh (ISIS). Journalists from Russian media including RIA Novosti, RT and Sputnik became the first to enter the city, and managed to capture some of the first images and video from the ruins of the ancient city. Sputnik offers a compilation of some of their best work.

On Thursday, the Syrian Army, supported by Russian aviation and special forces, regained control over Palmyra.

Daesh had seized the city, the former ancient capital of the Palmyrene Empire and one of the most prosperous cities of the Roman Empire, in May 2015. The terrorists' barbarism shocked international observers, with Daesh destroying a number of UNESCO World Heritage Sites, including the Arch of Triumph, the Temple of Baalshamin and the Temple of Bel. The destruction was accompanied by brutality against the local population, with the terrorists staging public executions of 'enemies', including Khaled al-Asaad, the archeologist who had cared for the city's antiquities, in Palmyra's Roman Amphitheater.

© AFP 2020 / STRINGER
'Fighting Hand in Hand': Damascus Praises Russia's Role in Palmyra Liberation
In March 2016, Syrian forces backed by Russian air support managed to win back the city. Russian specialists arrived in Palmyra to demine the historic center and residential areas; in the summer, historians and archeologists visited to assess the damage and prepare a report on the cost of restoring the historic site. Unfortunately, while Syrian and Russian efforts were concentrated on the operation to liberate Aleppo, jihadist forces hit back, briefly retaking the city in December 2016.

On Thursday, however, the Syrian Army struck back with a vengeance, kicking the terrorists out of the city and beginning planning for an offensive across the front.

RIA Novosti correspondent Mikhail Alaeddin became the first journalist to enter the historical part of the city together with the Syrian Army, publishing the first photos on Twitter.

Sputnik shares some of Alaeddin's most spectacular shots:

The Syrian Army's rapid assault saved Palmyra, known as 'the jewel of the Syrian desert,' from total destruction, Alaeddin said.

Also on Thursday, RT became the first television broadcaster to conduct a report from liberated Palmyra. Correspondent Lizzie Phelan offered details of the Army's successful campaign to return the ancient city to civilization, following many months of cruelty and savagery at the hands of Daesh radicals.

Sputnik has also shared some of the first footage coming out of the Syrian Army's advance to clear the city of enemy militants.

On Friday, Ruptly TV published drone footage of the liberated city, providing a rare glimpse of its ancient ruins from the air.

Arab media, both state and independent, has also offered some breathtaking video of embedded reporters' work, including video of the Syrian flag fluttering over the ruins of the ancient part of the city, and roaming footage from on the ground in the modern quarter.

The liberation of Palmyra is highly symbolic, a sign of the victory of millennia of civilization over barbarism. But Damascus doesn't plan to rest on its laurels.

On Thursday, Bashar Jaafari, Syria's UN ambassador and the head of the government delegation at the intra-Syria talks in Geneva, stressed that the operation against the terrorists would continue until the country is fully freed.