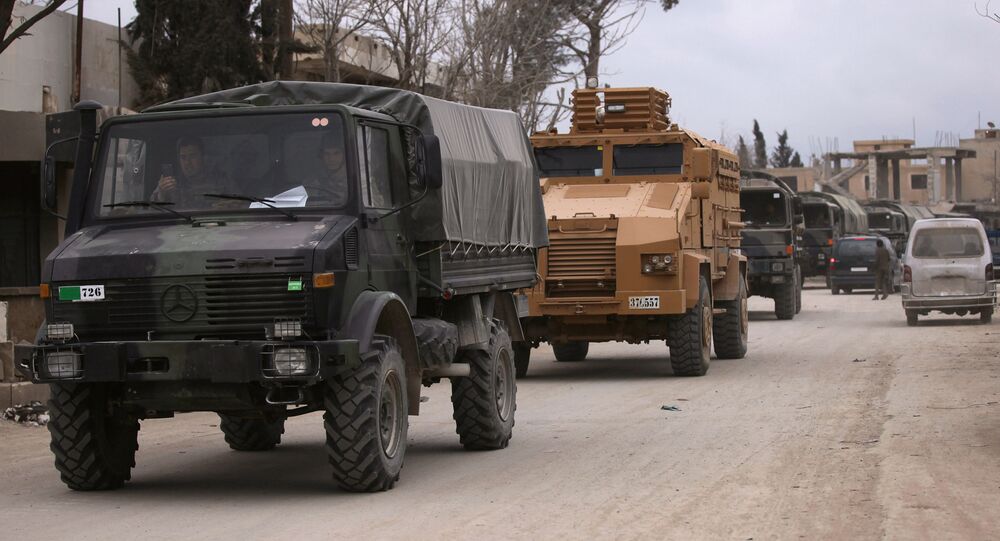 Reliable sources in the Middle East have told Sputnik that Turkey continues setting up military bases in the north of Syria. Kurdish politician Rezan Hiddo spoke to Sputnik Turkiye about what Turkey's Armed Forces are up to in the area.

Reliable sources in the Middle East have told Sputnik that after setting up a military base in the Aktarin district to the north of Aleppo, Turkey has now set up another military facility in the city of al-Bab which was recently liberated from Daesh.

The base was set up near the Akil hill which is considered to be a strategic height. The sources also said that Turkey is setting up a facility near the city of Azaz.

© REUTERS / Khalil Ashawi
Turkish military vehicles drive in the Syrian rebel-held town of al-Rai, as they head towards the northern Syrian town of al-Bab, Syria March 2, 2017

Kurdish politician Rezan Hiddo, the Chairman of the Syrian Democratic Council, which also includes the Kurdish Democratic Union Party (PYD), commented to Sputnik Turkiye on the above reports.

"We have no intention to advance towards al-Bab as it is the area of deployment of the Turkish Armed Forces and the Forces of the Free Syrian Army operating within the Operation Euphrates Shield," he told Sputnik.

© AFP 2020 / DELIL SOULEIMAN
US Sets Up Military Base in Syrian Manbij to 'Defend It From Turkish Attack'
Meanwhile, he said, the residents of al-Bab and its environs have told us that Turkey has set up a military base on the strategic hill of Akil and is gradually stepping up its presence there. Ankara has also set up a military base in close vicinity to the city of Azaz, he said.

By setting up the bases, the politician said, Turkey is not fighting against terrorism but is rather trying to annex the captured Syrian territories.

"Turkey is trying to present the cities of Jarabulus, Al-Rai and Azaz as Turkish territories. Ankara is constantly talking about the borders set up in the National Pact of 1920, a document adopted at the last session of the Ottoman parliament in Istanbul on February 17, 1920, and which considered the territories of the northern Syria and Iraq as Turkish.

Turkey wants to annex the territories of Aleppo, Manbij, Jarabulus and Al-Shaykh, which we think is its ultimate goal, the politician finally stated.