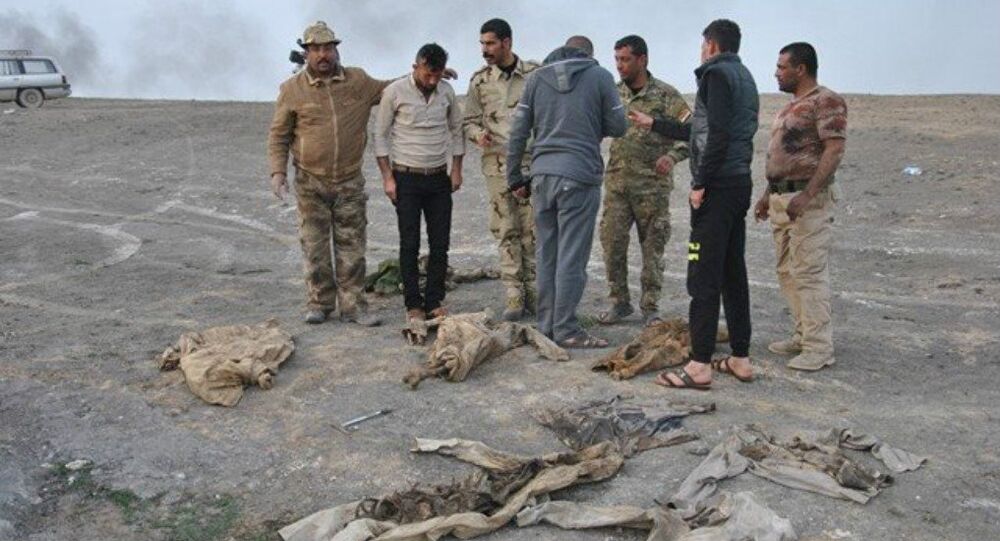 Sputnik Arabic has obtained exclusive photos of a mass grave south of Mosul near the village of Rujuu. Local activists found the remains of local residents executed by Daesh terrorists out of a local naturally formed pit, where the victims had been dumped after being killed.

The bodies had been thrown into a deep pit outside Rujuu. Following the areas liberation by Iraqi security forces, local activists from another nearby village, al-Hud, were able to descend to the bottom of the pit using a rope tied to a car. Activists retrieved the remains of 15 people.

The victims' necks were fitted with collars put on their neck by the terrorists. Damage to the victims' skulls indicates that they were shot in the head.

Speaking to Sputnik Arabic, Muhannad, an activist from another local community – the village of al-Kayara, explained how the activists managed to find the mass grave.

"Even before the liberation of southern Mosul from Daesh, one person had been to the area and saw the bodies of the dead and the blood. He couldn't stay and inspect the area in detail, since it was dangerous, but he did manage to take a picture of this place, which helped us tremendously in finding it," the local resident explained.

Last week, Iraqi security forces made a separate gruesome discovery at the Khasfa sinkhole outside western Mosul. The large natural depression is believed to be Iraq's largest mass grave, containing about 4,000 bodies of Iraqi security personnel, who were captured and killed by Daesh over the space of six months after the terrorist group captured the city in 2014.

The grave found near Rujuu confirms that not even the tiniest of Iraq's village communities were spared from Daesh's reign of terror. Hopefully, that reign may soon come to an end. On Wednesday, Iraqi media reported that Daesh leader Abu Bakr al-Baghdadi has admitted defeat in Iraq.

'Worry About Daesh': Russian Senator Responds to US UN Envoy's Remark on Crimea

Downfall of the Caliphate: Daesh's Revenues Plummet Amid Battlefield Losses