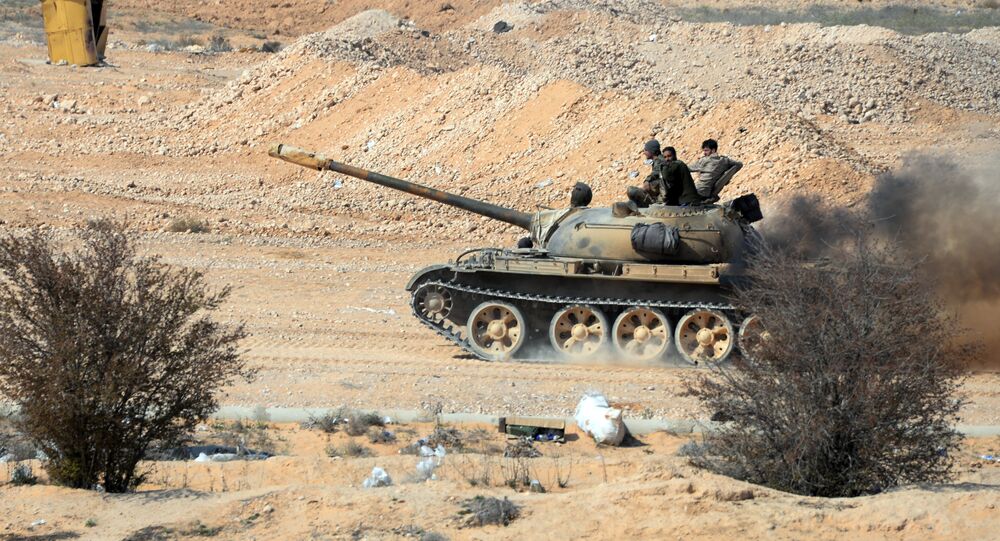 At least two bomb-loaded armored vehicles with Daesh suicide attackers heading to the Syrian army positions near the southwestern entrance of Palmyra were destroyed, according to a source.

DAMASCUS (Sputnik) — The Syrian army destroyed bomb-loaded armored vehicles of the Islamic State (ISIL or Daesh) terrorist organization (outlawed in Russia), which the militants planned to use against the army positions near Palmyra, an informed source told Sputnik.

"At least two bomb-loaded armored vehicles with suicide attackers heading to the army positions near the southwestern entrance of Palmyra were destroyed," the source said.

© AFP 2021 / Ayham al-Mohammad
Palmyra in Sight: Syrian Army Fighting for Strategic Height al-Tar Near the City
The government forces and their allies managed to detect the militants and destroy their military equipment as well as 10 terrorists, the source added.

The military operations are being carried out 2 miles away from Palmyra near at-Tar caves, according to the source. The sides continue fighting over the Hayan mountain to the east of the city. Daesh militants withdrew some of their forces toward Deir ez-Zor, controlled by the government forces, the source said.

Palmyra was first taken by the Daesh terrorists in May 2015. After they recaptured the city in December 2016, the Syrian army launched an operation to retake it.