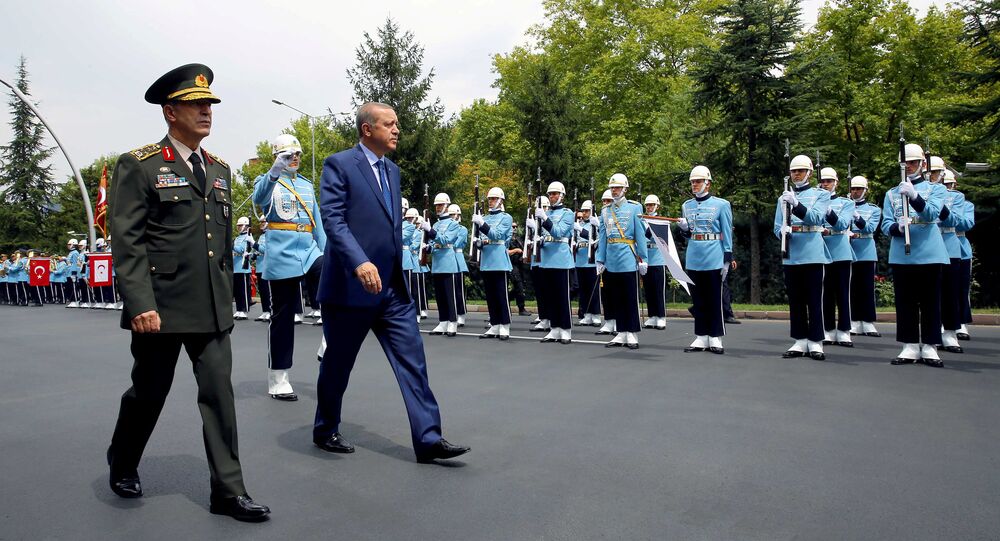 The Turkish General Staff called media reports on disagreements between the servicemen and government "unjustified criticism," according to official statement.

Last week, Turkish newspaper Hurriyet issued an article with a controversial headline, which translates to "Headquarters are disturbed." The newspaper cited unknown military sources, claiming that the Turkish military were discontent with the recent changes in the armed forces, for instance, allowing women soldiers to wear headscarves. The servicemen were also reportedly dissatisfied with too close relations between Chief of General Staff Gen. Hulusi Akar and country's president, Recep Tayyip Erdogan.

"We have recently faced an unjustified criticism, aimed at splitting the armed forces and cast a shadow over the fight, waged by the army to ensure security of our country and also over the head of the general staff. We are sorry to be observing this. There is no question about the General Staff's concerns, mentioned in the article. We are observing with regret attempts to put calumny about disagreements between the government and the army on the agenda," the General Staff said in a statement obtained by Sputnik.

Sputnik Türkiye/HİKMET DURGUN
Turkey Sends Troops, Armored Personnel Carriers to Syrian Border – Reports
Earlier in the day, Erdogan, commenting on the article, called the article's title "bad-mannered" and "rude," adding that the legal process against the headline had already been initiated. The Turkish leader added that statements about his close ties with the chief of General Staff, based on claims that Erdogan had been taking Akar in every his trip, were unforgivable.

Last week, the Turkish Defense Ministry announced a new regulation, allowing female military and non-commissioned officers in the General Staff, command headquarters and branches to cover their heads with a headscarf under their caps or berets, provided it was the same color as the uniforms.

Turkish Army Will Allow Women to Wear Headscarves With Uniforms