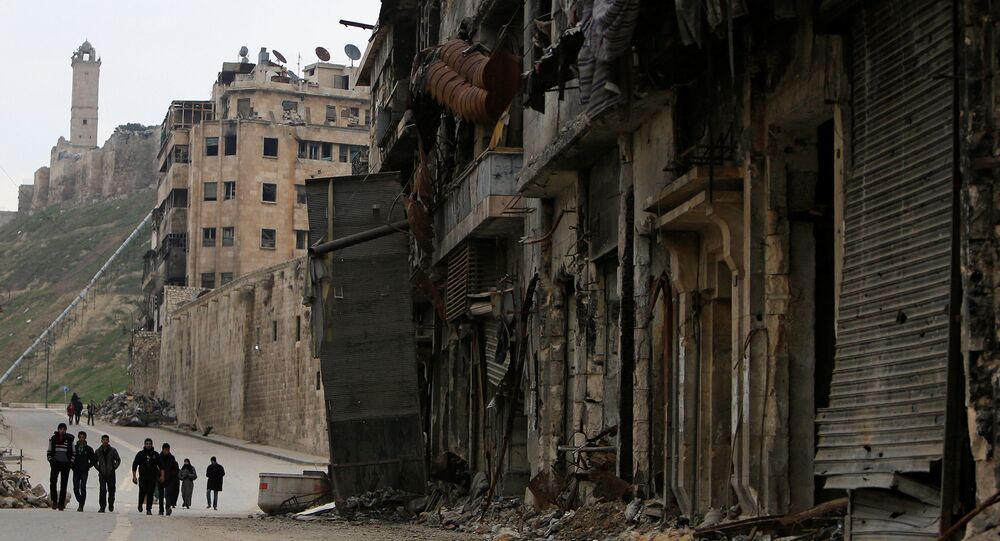 Syrian Peace Settlement: What Choice Moscow, Iran Are to Face in the Region

As the new round of UN-mediated intra-Syrian peace talks kicks off in Geneva, Russian political analysts review whose interests are currently at stake in the region.

© Flickr / SuperJet International
Behind the Deal: Was Iran Really 'Talked Into' Buying Russia's Sukhoi Jets?
The Moscow-Ankara-Tehran alliance on the settlement of the Syrian conflict has already brought certain success: the three countries have acted as guarantors of the full-scale ceasefire in the war-torn country and have launched negotiations in Astana aimed to complement the Geneva format.

Russian political analysts, however, have drawn attention to the paradoxical nature of the alliance and provided their reasons why the three allies might start experiencing difficulty soon.

The Russian online newspaper Gazeta.ru has interviewed a number of Russian experts, who first of all pointed to the bilateral relations between Russia and Iran, noting that not everything goes smoothly between the two countries.

"The basic problem in the bilateral relationship between the two countries is that no matter what compromise is reached in the Syrian conflict, Iran is going to lose from it," the newspaper says.

Leonid Isaev, an expert in Middle Eastern affairs at Moscow's Higher School of Economics pointed out that when Russia was limited only to abstract declarations on the developments in the Middle East, Russia and Iran were on the same side in the conflicts, as there was nothing to divide.

However Moscow and Tehran, he said, are going to find themselves on opposite sides of the barricades as soon as Iran's interests in Syria are entrenched upon.

"If we take into consideration that the Syrian conflict is going to be resolved by a division of the spheres of influence, and everything seems to be heading towards that, the former allies will become adversaries," he told the newspaper.

Americans will get the territories which are currently under Kurdish control, he suggested. The Turks will get Idlib and the north of Aleppo province. Russia's sphere of interest will include Damascus and the territories under Syrian government control, he said. And in this sense, Iran is Moscow's main rival because it has designs on the same area.

Isaev also noted that even though the new US administration does not have a clear strategy for the Middle East so far, it has nevertheless indicated some key principles it is going to pursue.

© AFP 2020 / Kirill KUDRYAVTSEV
Astana Talks Could Help Build Russia-Iran-Turkey-Syria Security System
One of them is that for the Trump administration, Iran represents one of the key threats in the region.

"The characteristic feature of Obama's policy in the Middle East was that its main enemy in the region was not Iran, as it was for the previous administration of George W Bush, but the terrorists of the Islamic State (Daesh). Obama made it clear for every player in the region that he was interested in cooperation if it was against Daesh," he said.

However, now Russia seems to be facing a choice. Trump says that he is ready to cooperate with Russia on security issues. But he means not only Daesh here, but Iran as well, regardless all of his electoral promises that his alliance with Moscow will be aimed against terrorist organizations, Isaev said. Moscow will be forced to make its choice.

Iranian president Hassan Rouhani is slated to visit Moscow in March. Hence Leonid Isaev suggests that the Syrian issue is going to top the agenda of his negotiations with President Putin.

"In fact, we see two suggestions here. One is from Washington and another – from Tehran. Russia is facing a very difficult choice here. The first option is that we start a Russian-American reset, however whether it is going to be a success still remains unclear. The same goes for how it applies to Ukraine and other conflict zones. Even though it is still a possibility," he said.

Another option is to stay with Iran, the analyst said. Then Moscow should understand that in this case neither US officials nor even Trump himself will cooperate with it, he concluded.