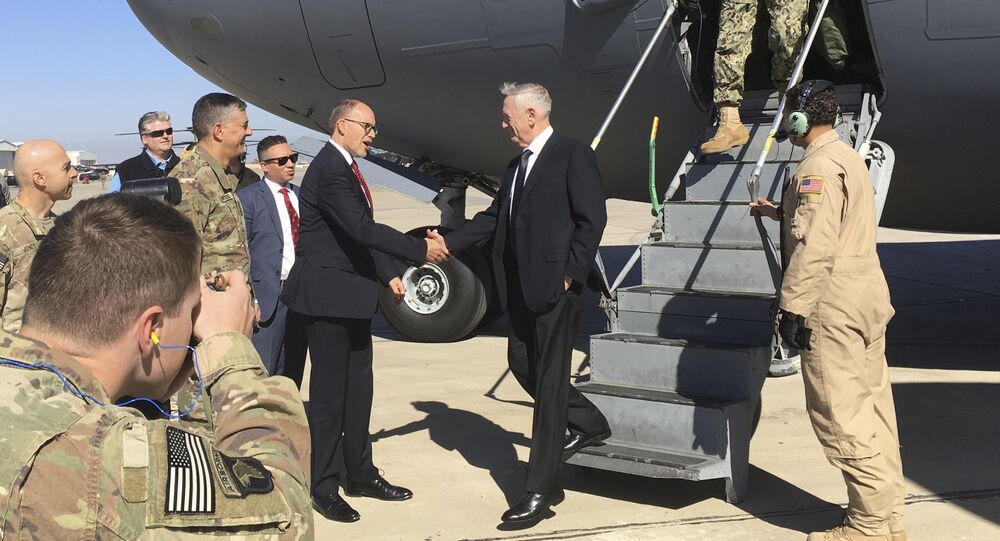 We're Not Here for Your Oil, Mattis Tells Iraqis

The US is not here for your oil, US Defense Secretary Jim Mattis said as he made his way to Iraq for a quick, unannounced trip.

US President Donald Trump has made both jokes and threats about seizing Iraq's oil, saying "to the victor belong the spoils" during his campaign and telling assembled US intelligence personnel on his first day in office that perhaps the country would get "another chance" to take the oil they'd left behind after toppling Saddam Hussein and leaving the country in chaos.

"I think all of us here in this room, all of us in America have generally paid for our gas and oil all along, and I'm sure that we will continue to do that in the future," Mattis told reporters accompanying him as he traveled to Baghdad. "We're not in Iraq to seize anybody's oil."

The US will, however, probably be in the country for a long time as American forces support Iraqi troops in their battle to oust Daesh militants, Mattis remarked after meeting in Baghdad with military commanders and Iraqi political leaders.

Despite Trump's threats and the inclusion of Iraq in his short-lived travel ban (which resulted in US coalition partners being detained at airports) Mattis said his visit revealed a strong partnership.

"[T[he Iraqi people, the Iraqi military and the Iraqi political leadership recognize what they're up against and the value of the coalition and the partnership, in particular with the United States," the secretary of defense said.

"I imagine we'll be in this fight for a while and we'll stand by each other."

The top US defense official also said he'd be open to any requests his commanders might have as they advise and support local forces fighting to retake the city of Mosul from Daesh and move on to its stronghold in Raqqa, Syria. An operation to force Daesh from the west of the city began days ago.

Senior US commander in Iraq Lieutenant General Stephen Townsend joined Mattis for his remarks. He commented that he did not expect US troops to be asked to leave the country after the battle for Mosul was over.

"I think that the government of Iraq realizes their very complex fight, and they're going to need the assistance of the coalition even beyond Mosul."

Townsend also confirmed that US forces are moving closer to the battlefront as the operation to retake western Mosul kicks off. "It is true that we're operating closer and deeper into Iraqi formations," Townsend said, acknowledging a shift approved in November, during the end of the Obama administration.

US military personnel had largely maintained positions well behind the front lines since returning to Iraq in 2014, but after the battle to retake Mosul launched in October, the administration moved to allow US trainers and advisers to move closer to the battlefield for the operation, the New York Times reports.

Lieutenant General Jeff Harrigian, the top Air Force commander in the Middle East, told AP that US troops responsible for calling in airstrikes are now closer to the battle and are able to advance with Iraqi units. They can now speak directly to pilots in the aircraft they're directing, making airstrikes quicker, he said.

Mattis's trip was the first by a senior Trump administration official to Iraq. One of Trump's first acts as president was to order a 30-day review of the state of the fight against Daesh. There is one more week left in the review period, after which Mattis will have to give the president a plan to speed up the fight against the group.

Asked in a news conference if the country was worried the US would indeed come for its oil, spokesman for Iraq's counter-terrorism services Sabeh Al Noman said, "We will trust your government, so we won't worry about that."

There are more than 5,000 US military personnel in Iraq.