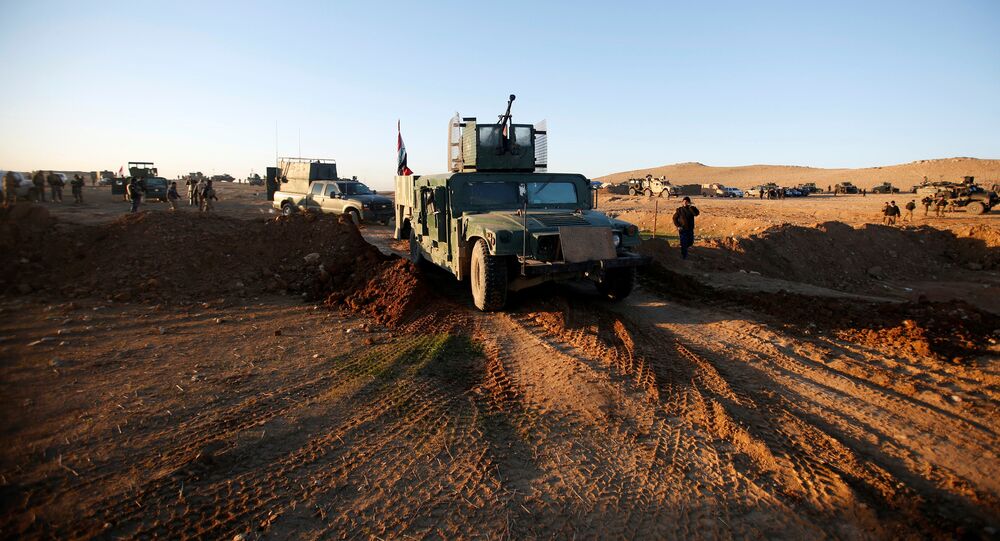 As part of its offensive to liberate the western part of the city of Mosul from Daesh terrorists, the Iraqi army has taken under control three strategically important villages in the south of the city, a source in the Iraqi army told Sputnik Arabic on Sunday.

© REUTERS / Zohra Bensemra
Iraq's New Offensive to Kick Daesh Out of Mosul 'Unlikely to Feature Lightning Advances'
Iraqi Prime Minister Haider Abadi announced on Sunday the start of the operation to liberate the western part of the city of Mosul from Daesh terrorists.

Brigadier-General Yahii Rasul, the representative of the Iraqi United Forces told Sputnik Arabic that forces of the 9th Armored Division of the Iraqi army, federal police and the Hashad al-Ashairi forces have taken under their control the villages of al Jamasiya, Kuneitra and al Bujuwar along the shores of the Tigris river. Daesh forces are experiencing great losses, he added.

The Iraqi army is advancing further towards Mosul and is planning to retake the villages of al Zakrutia and al Buseif.

The Iraqi forces are advancing according to plan, the brigadier-general told Sputnik.

The 9th Armored Division has liberated Bahira village to the west of Mosul, three villages along Mosul-Baghdad highway, three villages to the south of the city and has taken under control major highways leading to the city. However, these wins are  only the beginning as the fighting is still ongoing, he said.

© REUTERS / Khalid al Mousily
Iraqi Forces Launch Major Push to Liberate Western Mosul From Daesh
Regardless of the specific deadlines of the offensive, the lives of civilians remain the priority for the military as well as the preservation of public and private buildings and infrastructure, the brigadier-general said.

He also noted that Daesh is not putting up a strong resistance due to the heavy losses it has experienced over the last several weeks. In many cases, the terrorists simply decide to flee from their positions, leaving behind numerous mines.

On the whole, the Iraqi army is advancing pretty quickly, Yahii Rasul concluded.

UN: Over 217,000 Iraqis Flee Mosul as Operation to Free City From Daesh Advances