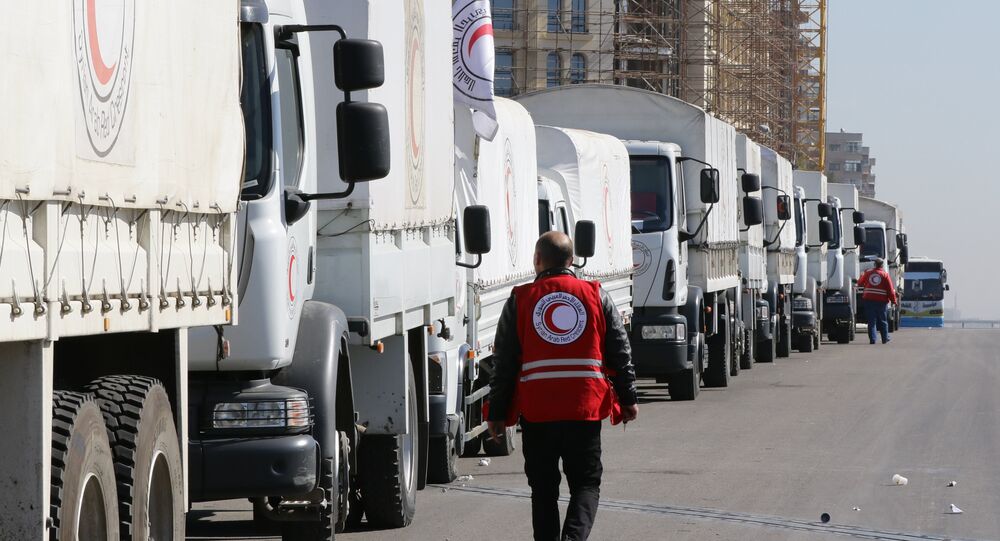 Residents of Syrian besieged settlements of Madaya, Al Zabadani, Al Fuah, and Kafarya may face starvation, if the United Nations would not be able to deliver humanitarian aid there, Jan Egeland, senior adviser to the UN special envoy for Syria, said Thursday.

GENEVA (Sputnik) — At the same time, Egeland said that the United Nations was ready to send a humanitarian convoy to al Waer, a besieged suburb of the Syrian city of Homs, ahead of the upcoming intra-Syrian talks in Geneva next week, if the Syrian Health Ministry issues a permit.

"If we are not reaching the four towns Fuah, Kafarya, Madaya and Zabadani, very soon we will see again the scenes that we saw when the halting started a year ago, people starving," Egeland told reporters in Geneva.

© Sputnik / Khaled Al-Khateb
Super Food: Secret Behind Potato Consumption in Syrian Army
"We have lined up a convoy to al Waer could go tomorrow," he added.

According to Egeland, not a single besieged area was reached with UN land convoys this year.

Astana and Geneva talks may result in lifting sieges of some areas in Syria that remain surrounded, Egeland said.

"It is a shame that members of the task force were not able to lift a single siege by negotiations in 2016. There is commitment to try to do that in 2017, it could happen through talks in Astana, in Geneva and elsewhere. ‘Lift the sieges’ is our appeal. Sieges belong in the Middle Ages, they do not belong in 2017," Egeland said.

He added that 13 areas were still under siege in Syria.

Civilians in Syria have been severely affected by the war that started in the country in 2011. The internal conflict between the government forces, armed opposition and jihadist groups claimed thousands of lives, left over 6 million people displaced and over 13 million in need of humanitarian assistance, according to UN data. Russia has been providing humanitarian aid to Syria since October 2015.