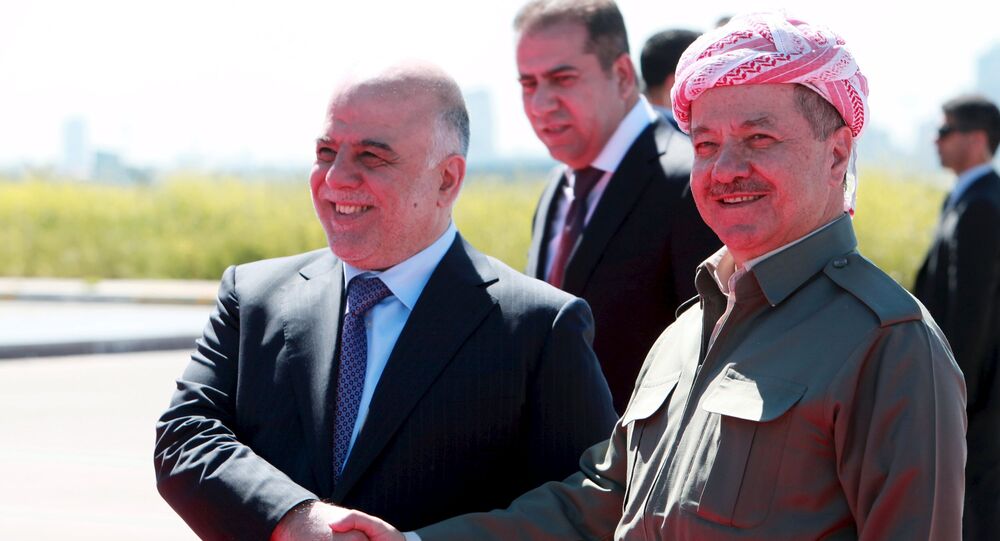 President of the Iraqi Kurdistan Region Masoud Barzani is anticipated to hold talks with Iraqi Prime Minister Haider Abadi on the sidelines of the Munich Security Conference (MSC) in Germany, slated for later this week, Barzani’s chief of staff Fuad Hussein told the Rudaw media outlet on Wednesday.

© Sputnik / Mikhail Alaeddin
Kurdish Issue: How Russia's Draft Constitution May Prevent Syria's Fragmentation
MOSCOW (Sputnik) — Abadi and Barzani last met in September 2016 in Baghdad, ahead of the start of an operation to liberate the city of Mosul from jihadists. The two officials also met at the MSC conference in 2016.

The MSC, which is an annual major global forum founded in 1963 and devoted to the discussion of key security issues, is scheduled for February 17-19. This year's conference agenda focuses on the future of transatlantic relations and NATO after the election of Donald Trump, the state of European cooperation in security and defense matters, relations with Russia as well as the war in Syria, the security situation in the Asia-Pacific, and information warfare.

Kurds are Syria’s, Iraq’s and Turkey’s largest ethnic minority. The ethnic group is striving to create their own independent state. Kurdistan in Iraq was created in 1970 based on an agreement with the Iraqi government, ending years of fighting. It gained autonomous governance status as part of the 2005 constitution, but is still considered part of Iraq.

© AP Photo / Lefteris Pitarakis
Any Syria Settlement Meetings Excluding Kurds Doomed to Fail – Turkish HDP Party
Tensions between Ankara and Turkish Kurds escalated in July 2015 when a ceasefire between Turkey and the Kurdistan Workers’ Party (PKK) collapsed over a series of terrorist attacks, allegedly committed by the Kurdish organizations, considered as terrorist groups by Ankara.

Earlier, an Iraqi Kurdistan representative to Russia said that the Iraqi Kurds should be invited to intra-Syrian talks in Geneva, where they can speed up settlement and cessation of hostilities, as well as facilitate strained relationship between Turkey and Syrian Kurds.

The next round of UN-mediated talks in Geneva is expected to take place on February 8. UN Special Envoy for Syria Staffan de Mistura said the issue of Kurdish participation in the intra-Syrian talks would be agreed upon in early February.

Syria Peace Talks Should Be Direct, Include Kurds - Russian Envoy to UN